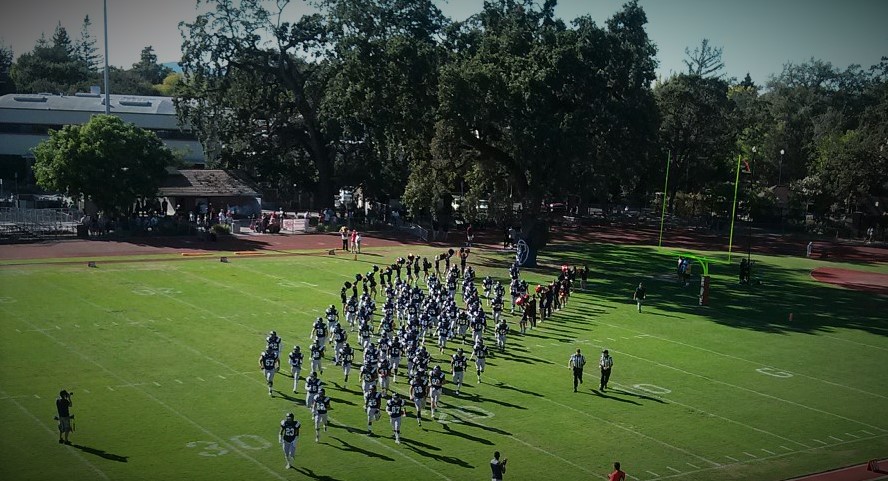 It has been an up and down season for the SRJC Bear Cubs. In the pre-season rankings, they were No. 11 team in the state and had all kinds of hope. That didn’t last long after a season opening loss to San Joaquin Delta, which knocked them out of the rankings. After two straight wins they were back at No. 24, only to lose the following week and drop out again.


Then two weeks ago came the game that they hope will be a springboard. That was the 44-0 win over Sequoias, who went into the game 4-0 and No. 6 in the state. So as they start conference play, the Bear Cubs are back in the rankings where they were in the pre-season at the No. 11.
They hope to stay there this time.
Not only do they hope to stay there, but be a big factor in the Bay 6 Conference race. They will find out if they can do that quickly. SRJC opens Big 6 play the next two weeks with home games against No. 5 San Mateo and No. 6 San Francisco, who both go into conference play at 4-1.
First up is San Mateo, who they play Saturday at 5 pm. The game will be broadcast on KSRO 1350 and 103.5 FM starting with the pre-game show at 4:35.
San Mateo was No. 6 in the pre-season rankings. They got as high as No. 2, before falling back. What knocked them back was a 43-30 loss to San Joaquin Delta, the same team that beat SRJC in the opener 27-17.
Fun fact is San Joaquin Delta went 1-9 last season. This season they are 0-3 in the other games besides the wins over SRJC and San Mateo. The three teams they lost to, lost to either SRJC or San Mateo.
If SRJC is going to get off to a good start they will probably have to score some points. The 43-30 loss to San Joaquin Delta is the least amount of points that San Mateo has scored this season. They are averaging over 42 points a game, with is No. 4 in the state.
It is a young team. Quarterback Dru Brown and the CSM top three running backs are all freshman.
As inconsistent as the SRJC season has been, the defense has improved each week. The most yardage they gave up was in the opening week loss to San Joaquin Delta. Each week they have given up less and less, until the masterpiece against Sequoias, in which they gave up 263 yards and forced ten punts.
The inconsistent part of the team has been the offense. At times they have looked very good, at other times not so good. The leader of that kind of season is quarterback Vincent Jefferies. After starting in the opener he was replaced late in the second quarter. He returned in the first quarter of the second game against Butte.
Jefferies’ best game was a 30-29 win over Sacramento City, a game they trailed 29-14 in the third quarter. Jefferies led them back, passing for 424 yards and four touchdowns.
The Bear Cubs followed that up with its worst game of the season. They fell behind Laney 24-0 in the third quarter in a 31-20 loss. Jefferies was 15 of 45 for 227 with two touchdowns and three interceptions. The bright side is that is the only interceptions that Jefferies has thrown this season. Then was the team’s best game of the season, which was the win over Sequoias. Jefferies went 25 of 34 for 291 yards and three touchdowns.
Last season San Mateo went 9-2 and was No. 1 in the state before a season ending loss to San Francisco, who took over the No. 1 spot and San Mateo’s place in the state playoffs, before losing in the state championship game.
Last season the schedule played out the same way. SRJC went into conference play with hope and a 5-0 record. The hope was gone after back to back losses which included a shocking 70-0 loss to San Francisco. That was one week after SRJC took a 24-21 loss to San Mateo, a game they led 14-7 in the third quarter.
SRJC football program looks like it is headed in the right direction. Last season they finished 7-4, which was its best record since 2008. That was also the last time they finished over .500 in conference play and defeated San Mateo.
Last season SRJC opened confrence play against these two teams on the road. This time they get them at home and hope to be right in the middle of the conference championship race when all is said and done.
It depends on which team shows up.
JUNIOR COLLEGE FOOTBALL
No. 5 San Mateo (4-1) at No. 11 SRJC (3-2)…SATURDAY 5 PM
KSRO 1350 AM…103.5 FM…BROADCOAST 4:35
HIGH SCHOOL SCHEDULE
ALL GAMES FRIDAY AT 7:30 UNLESS NOTED
NORTH BAY LEAGUE
No. 7 Casa Grande (2-4) at No. 1 Cardinal Newman (4-2)…FRIDAY 7 PM
KSRO GAME OF THE WEEK…BROADCAST TIME 6:35
No. 9 Maria Carrillo (3-3) at No. 3 Rancho Cotate (4-2)
Santa Rosa (2-4) at No. 8 Windsor (4-2)
Ukiah (2-4) at Montgomery (0-6)
SONOMA COUNTY LEAGUE
No. 2 Analy (6-0) at Healdsburg (3-4)
No. 6 Petaluma (5-2) vs. El Molino (1-4) at Windsor …SATURDAY 7:30
Sonoma Valley (0-6) at Piner (3-4)…SATURDAY 1:30
NON LEAGUE
Elsie Allen (0-6) at Emery (1-5)…SATURAY 2 PM
NCL I
No. 4 St. Helena (6-0) at No.10 Middletown (2-3)
Kelseyville (1-5) at No. 5 Fort Bragg (6-0)
Willits (4-2) at Cloverdale (5-1)
Lower Lake (3-3) at Clear Lake (2-3)
BAY FOOTBALL
Stellar Prep (Oakland) (2-3) at St. Vincent (2-4)…SATURDAY 2 PM
My email address is jacpasquini@comcast.net
Share