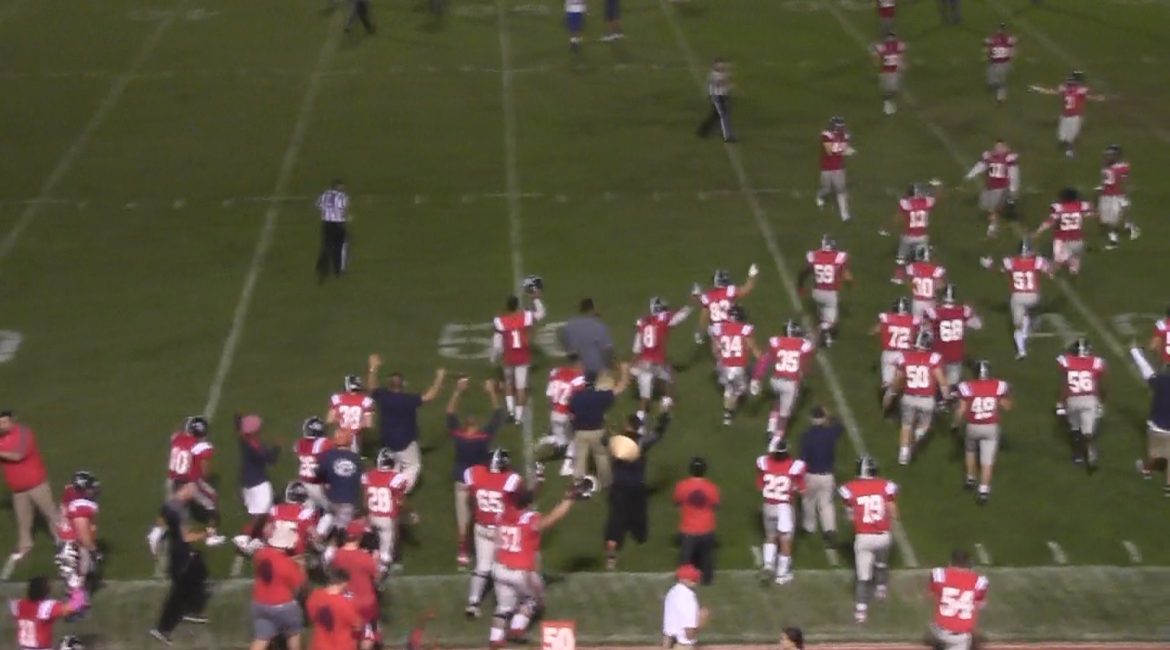 As the season has gone on the SRJC defense has been getting better. The game scores might not have showed it at times, but all the other numbers did. The exclamation mark was two weeks ago when they shutout No. 6 Sequoias 44-0. At least it looked like an exclamation point.


In its Bay 6 opener, the SRJC defense went up against San Mateo, the No. 5 ranked team in the state, a team that was there mainly because of an unstoppable offense. San Mateo went into the game averaging 44 points a game, which was the fourth best in the state. Take away one bolt of lightning and another unexplainable drive, the SRJC defense stopped them. Not only that, they came up with an interception late in the game to set up 20 yard field goal by Andros Pedroza with :33 second left to give the Bear Cubs a 17-14 win.
The SRJC offense did enough and that was mainly because of Analy graduate Ja’Narrick James, who rushed for 144 yards on twenty carries and a touchdown. The touchdown was on A 13 yard run that ended the first drive of the game. Some of the important yards were on the last drive that set up the winning field goal. The biggest play was an eight yard run on a 3rd and seven play. That let SRJC keep the ball for another three plays before the winning field goal and leave San Mateo with not much time left.
The drive for the winning points was set up on an interception by Keith Benjamin. That came with less than five minutes left and gave SRJC the ball at the San Mateo 41. That is when SRJC put on a classic four minute drive for the winning points.

Neither of the offenses did much. The difference in the game was SRJC took care of the ball and San Mateo didn’t. SRJC didn’t turn the ball over, while the defense intercepted two passes and recovered two fumble. San Mateo did have an interception returned for a touchdown called back by a penalty.
After the touchdown by James on the opening drive gave SRJC a 7-0 lead, it was defensive the rest of the way. SRJC made it 14-0 midway through the second quarter on a 13 yard pass from Vincent Jefferies to Dominic Drew.
Next was the bolt of lightning. Dru Brown hit Johnny Niupalu with a swing pass and he took in 70 yards to cut the SRJC lead to 14-7.
SRJC controlled the game most of the way. But they couldn’t increase the lead, partly because of two missed field goals, one of which was blocked right before halftime.
So SRJC was hanging on to the 14-7 lead early in the fourth quarter, when Jeff Andersen hit a 46 yard punt, which was downed inside the San Mateo one yard line. A delay of game penalty push them back even farther, in fact the ball was almost touching the goal line at the start of the drive.

San Mateo then went on a nine play 99 yards drive to tie the game. The big play was a 49 yard pass from Brown to Miles Willis, which moved the ball inside the SRJC 10 yard line. San Mateo actually gained more than the 99 yards it took to drive for the touchdown. After the 49 yard pass play, San Mateo was hit with a penalty to move the ball out to the 25. On the next play, James Clark went the 25 yards for the score and with 8:13 left it was a tie game which set up the finish.
To show you how the SRJC defense dominated the game, take away the 70 yard touchdown and the 99 yard plus drive, San Mateo gained a total of 180 yards on 51 plays, which is an average of under four yards a play.
The win will most certainly move SRJC into the top ten in the state rankings for the first time this season. The Bear Cubs have little time to celebrate that. Next week they host San Francisco, who defeated Foothill in its league opener 61-7 to raise its record to 5-1. San Francisco is the league defending champion and went into the game ranked No. 6 in the state.
Last season SRJC opened on the road against the same two teams. They lost to San Mateo 17-14, which was followed by a shocking 61-0 loss to San Francisco.
They reversed one decision. Next up they will try to make it number two.
WATCH VIDEO HERE
WEEKEND SCOREBOARD
NORTH BAY LEAGUE
No. 1 Cardinal Newman 41 No. 7 Casa Grande 13
No. 9 Maria Carrillo 36 No. 3 Rancho Cotate 35
No. 8 Windsor 38 Santa Rosa 14
Montgomery 24 Ukiah 21
SONOMA COUNTY LEAGUE
No. 2 Analy 67 Healdsburg 6
No. 6 Petaluma 48 El Molino 6
Piner 30 Sonoma Valley 14
NON LEAGUE
Emery 35 Elsie Allen 7
NCL I
No. 4 St. Helena 28 No.10 Middletown 0
No. 5 Fort Bragg 57 Kelseyville 24
Cloverdale 47 Willits 30
Lower Lake 32 Clear Lake 23
BAY FOOTBALL
Stellar Prep (Oakland) 47 St. Vincent 22
NCL III
Anderson Valley 44 Calistoga 24
Laytonville 38 Potter Valley 12
Point Arena 44 Rincon Valley Christian 28
Upper Lake 38 Mendocino 14
JUNIOR COLLEGE
No. 11 SRJC 17 No. 5 San Mateo 14
My email address is jacpasquini@comcast.net
Share