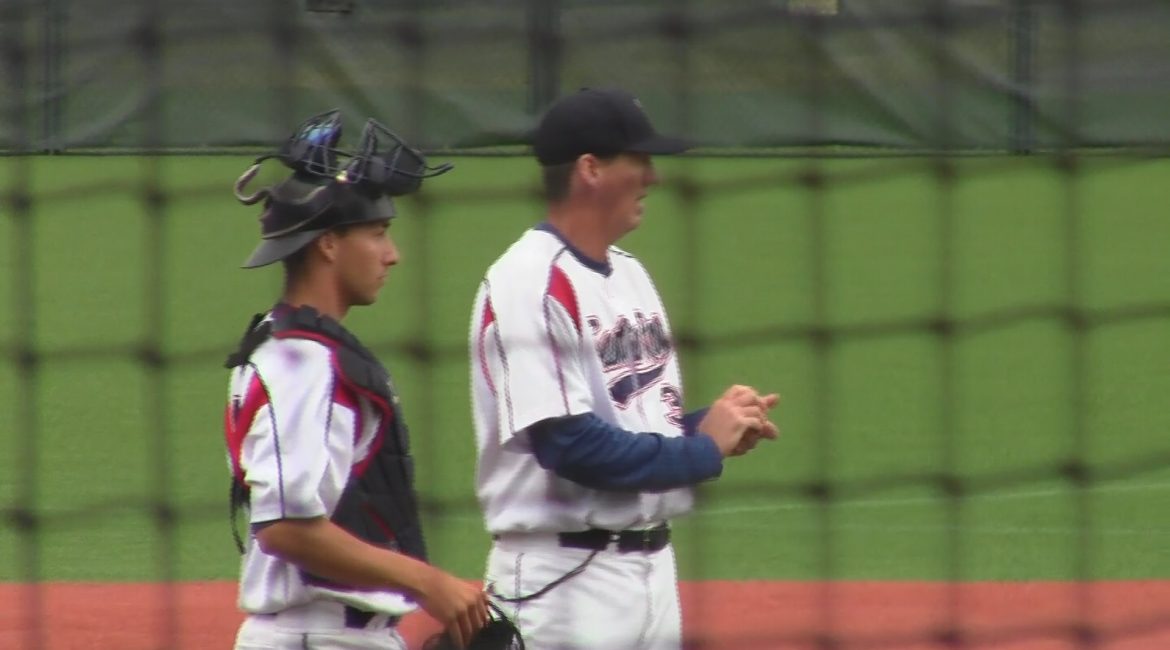 SRJC moves back into a first place tie in the Big 8 race by doing what they have done all season and that is stop the other team.
Jason Alexander went six innings giving up one run and Tyler Sanders closed the deal in the final three as SRJC defeated Sierra 4-2.  Alexander is now 5-0 on the season and for Sanders it is his third save.   He is also 3-0.

SRJC couldn’t get out of the first inning in the series opener on Tuesday, giving up seven runs in an 8-3 loss.   Alexander had a perfect first inning.
The game was tied 1-1 going to the sixth when SRJC took the lead for good on a two out single by Ryan Xepoleas.
The series is between the two top ranked teams in Northern California.
SRJC is 21-3-1 on the season.   Sierra is 22-4.
There are video highlights of the game here at YSN365.com.  http://www.ysn365.com/video/sierra-college-vs-srjc-baseball-4-4-13/
HIGH SCHOOL BASEBALL
Both the North Bay League and Sonoma County League can take different turns.
Both leagues have two undefeated teams left in league play with one of them meeting a team with one loss.
In the NBL, No. 1 Casa Grande and No. 5 Rancho Cotate is 3-0 which is one game ahead of Cardinal Newman and Montgomery.   Rancho Cotate is hosting Cardinal Newman, who’s league loss is to Montgomery.
Casa Grande is going for its 13th straight with a game at Santa Rosa.
Montgomery is also on the road at Windsor.
The other game is Maria Carrillo at Ukiah.  Both Windsor and Ukiah are looking for its first league win.
Over in the SCL it is No. 3 Analy and Petaluma who are undefeated in league play.
Analy will try to get its winning streak to nine with a game at Piner.    Piner is 2-1, losing its first league game on Tuesday to Sonoma Valley on Tuesday.
Petaluma tries to go to 4-0 with a home game against El Molino.
Sonoma Valley tries to get its league record to .500 with a trip to Healdsburg who is 1-1.
LIPPPERD AND THE SSU SOFTBALL RECORD BOOK
March 30th is a good date for SSU softball pitcher Samantha Lipperd.
This past Saturday she was the winning pitching as Sonoma State defeated Cal State Stanislaus 12-1.   Lipperd struck out five, which is modest for her.  The last strike out was the 1,000 strikeout of her brilliant career at Sonoma State.
Lipperd continues to rewrite the Sonoma State Softball pitching record book.   She long ago broke the school record for strikeouts; actually she has now doubled it.
Lipperd also has the record for the most wins in school history with 93, well ahead of the 73 wins that is second on the list.   This year Lipperd is 15-3 this year with an ERA of 1.61.   She has a decent shot at hitting the 100 win mark before she is finished.
It was on March 30th of 2012 when Lipperd jumped into the local headlines with an amazing Friday Night doubleheader.   The first game she struck out 17, which was the Sonoma State record for a game.  That record didn’t make it through the evening as  she struck out 26 in Game 2 which not only was the news Sonoma State record but also is the record for all of Division 2 for the most strikeouts in a game.
That memorable night was in the Tournament of Champions tournament in Turlock where SSU is this weekend.    The tournament kicks off today with SSU playing three games.
SSU is 26-8 and ranked No. 16 in the country.
TRACK AND FIELD
SRJC is hosting the Maria Carrillo Invitation Track and Field event today (Friday).   More than twenty schools are in the all-day event which starts at 1 pm.
The afternoon session is the Preliminaries with the finals going off this evening.
My email address is jacpasquini@comcast.net
Share