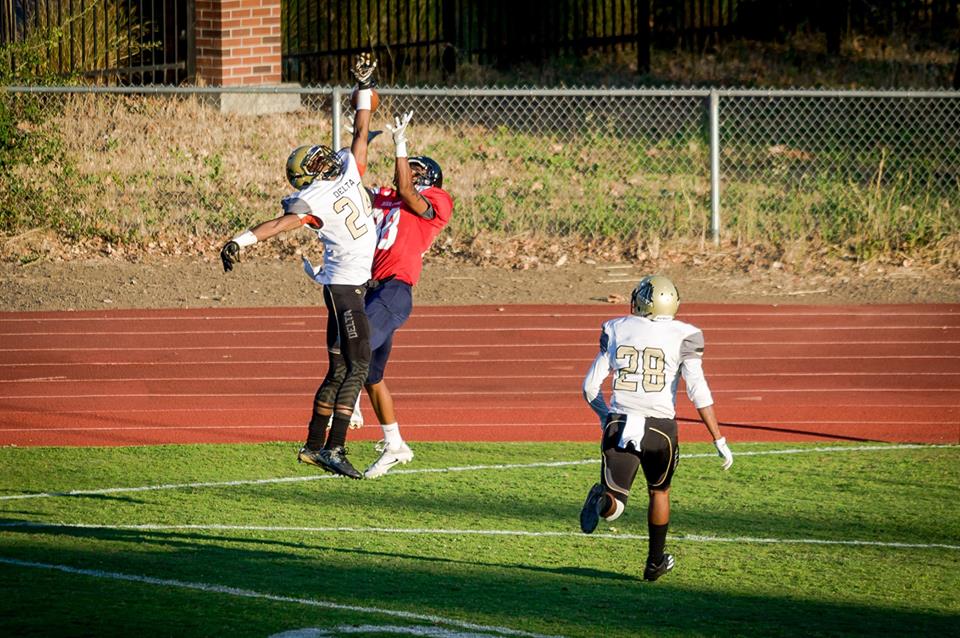 by Dale Watkins
The Bearcubs’ firepower on both sides of the ball were on full display Saturday night, blowing out the visiting San Joaquin Delta Mustangs, 55 to 23.
Delta imposed their will early, jumping out to a convincing 14-0 lead. Quarterback Jake Pruitt fired a bomb downfield to a streaking Derrion Grim for a 61-yard score. Follow that with a William Lewis 1-yard TD run on their next possession, the Mustangs seemed to have control of the ball game.

But Santa Rosa’s potentially lethal offense would finally come to life, exploding in the 2nd and 3rd quarters to outscore Delta 55 to 16 in that span. Ja’Narrick James sparked the comeback capping off back-to-back drives with short touchdown runs, tying the game at 14 a piece.
Kerr Johnson Jr. was brilliant in what might have been his breakout game of the season, which included catches of 62 and 68 yards, accelerating past tacklers and to the house. He recorded 197 yards on just 7 catches, to go along with his three touchdowns. Malcolm Jenkins would post his own highlight, snagging a pass over a defender’s reach and landing in the corner of the endzone. Delta’s lead was gone in a flash; the score 48-16 at that point. The former Analy High School trio of James, Johnson, and Jenkins would pick apart the defense all night long.
A safety was all the Mustangs could muster in response to an offensive onslaught that reeled off 41 points unanswered. An 18-yard hookup from Tyler Okiyama to Rodson Keaholi would pad the already insurmountable lead. The Bearcubs were putting up points almost at will.
Quarterback Mitch Hood was spectacular, completing 25 of 33 passes for a whopping 366 all-purpose yards and four TD’s on the night. James led the ground game with 114 yards on 9 rushes. Kicker Andros Pedroza was a busy man on special teams as well, nailing six of seven extra point attempts. Keilan Benjamin and Brendan White piloted a reckless Bearcub defense that intercepted Jake Pruitt three times.
Santa Rosa moves to a perfect 3-0 on the year, as they travel to Sacramento City College next week looking to extend their undefeated season.