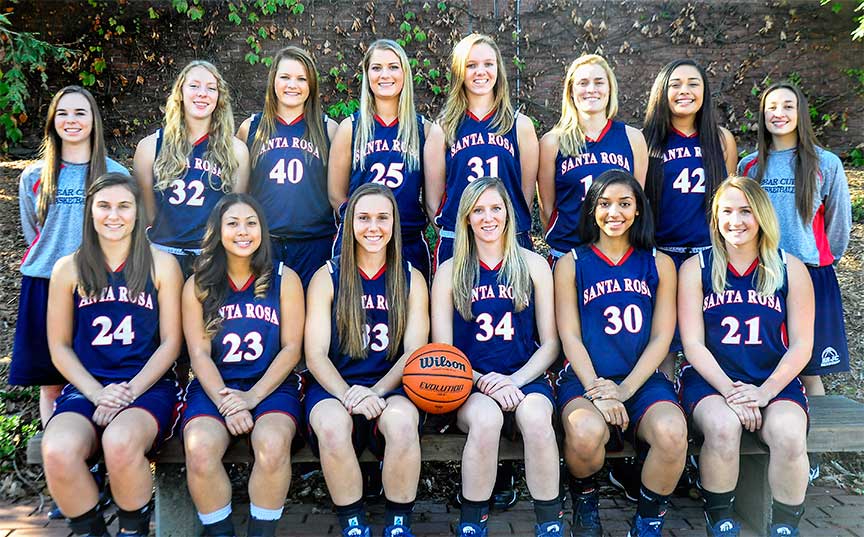 Much like the high school world, the JC pre-league schedule is dominated weekend tournaments.
For the next two weekends the two teams from SRJC will take turns hosting their own tournaments.
The Women go first with a tournament starting Thursday at 2 pm.
One team is ranked in the state top 25, that is San Joaquin Delta at No. 19.
Five of the eight teams are at a least .500.  Two of the teams that aren’t, are opening the tournament, when Mendocino meets Ohlone.  Those two teams are a combined 1-11.
Seven of the eight teams are from California.   The only one that isn’t is Southern Oregon, who is the first round opponent for SRJC.  Southwest Oregon started 0-2 and has won four of five since.  They have played six of their seven games against Oregon Schools.    In its last game they defeated Redwoods 92-72.
They have been a team that hovers around .500 over the last few years.  Last year they went 17-13.
The SRJC Women were a top ten team at the beginning of the season.  After a 3-1 start, they lost two straight.  All three of the losses were by 29 points or more.   All three teams they lost to are ranked in the top 16 in the state.
If you have followed this website for a while most of the names on the roster would be familiar.  Fourteen of the fifteen went to NBL, SCL or NCL I schools.
THURSDAY SCHEDULE
2 pm…Mendocino (0-4) vs Ohlone (1-7)
4 pm…Redwoods (4-5) vs. No. 19 San Joaquin Delta (7-2)
6 pm…Feather River (8-4) vs. San Francisco (4-2)
8 pm…Southwestern Oregon (4-3) vs. SRJC (3-3)
The SRJC Men, the defending state champions, are in their third tournament of the season.   They dropped the opening round game to Citrus 76-55.  The Bear Cubs have lost three straight and are 4-6 on the season.  Next weekend they will host their annual Kris Kringle Tournament.   In the first round on December 18th they will meet Feather River.   That will be their first home game of the season.
My email address is jacpasquini@comcast.net