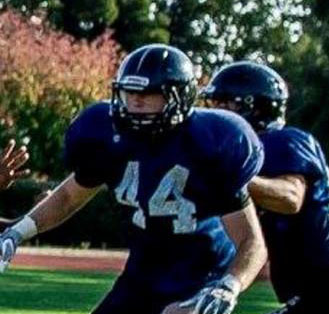 Sept. 14, 2016
CHICO, Calif. — The NCFC begins its third week of play as it moves through the non­conference
portion of the season. Perennial contenders San Francisco, San Mateo and Butte all got in the win
column in Week 2, and American River moved to 2­0.


The NCFC National Offensive Player of the Week is Diablo Valley receiver Marquese Surrell. He
grabbed 11 passes for 164 yards and two scores in a triumph over Chabot.
Henry Stelzner of Santa Rosa is the National Defensive Player of the Week after recording 12 tackles,
including three for a loss and a sack, plus an interception as the Bear Cubs moved to 2­0 with a win
over Fresno.
In the American Division, Mendocino’s Joceice Cannon exploded for 204receiving yards on five
catches, three of them for touchdowns, to earn Offensive Player of the Week honors.
The American Defensive Player of the Week is Shasta’s Carl Robertgeau, who picked off three passes
and broke up two others while recording four tackles and leading the Knights over Hartnell.
National Division
San Francisco (1­1) at American River (2­0), 6 p.m.: Familiar foes who have locked horns in big
games the past few seasons, the Rams and Beavers renew their budding rivalry under the lights.
American Division
Shasta (2­0) at Merced (2­0), 5 p.m.: Both these squads have looked strong in the early going,
but only one can come away unbeaten after this weekend. Merced has already scored 97 points in its
first two games, while the Knights have also enjoyed a pair of blowout wins. Stops may come at a
premium.
All games:
National Division
Feather River at Laney, 7 p.m. (Friday)
Sequoias at Diablo Valley, 7 p.m. (Friday)
De Anza at Siskiyous, 1 p.m.
Fresno at San Mateo, 2 p.m.
San Joaquin Delta at Santa Rosa, 5 p.m.  WATCH LIVE
Sacramento at Modesto, 6 p.m.
San Francisco at American River, 6 p.m.
Butte at Chabot, 6 p.m.
American Division
Contra Costa at Sierra, 1 p.m.
Los Medanos at Gavilan, 1 p.m.
Redwoods at Reedley, 1p .m.
Yuba at West Hills, 2 p.m.
Mendocino at Hartnell, 2 p.m.
Shasta at Merced, 5 p.m.
Foothill at Cabrillo, 6 p.m.
San Jose at Monterey, 6 p.m.
Share