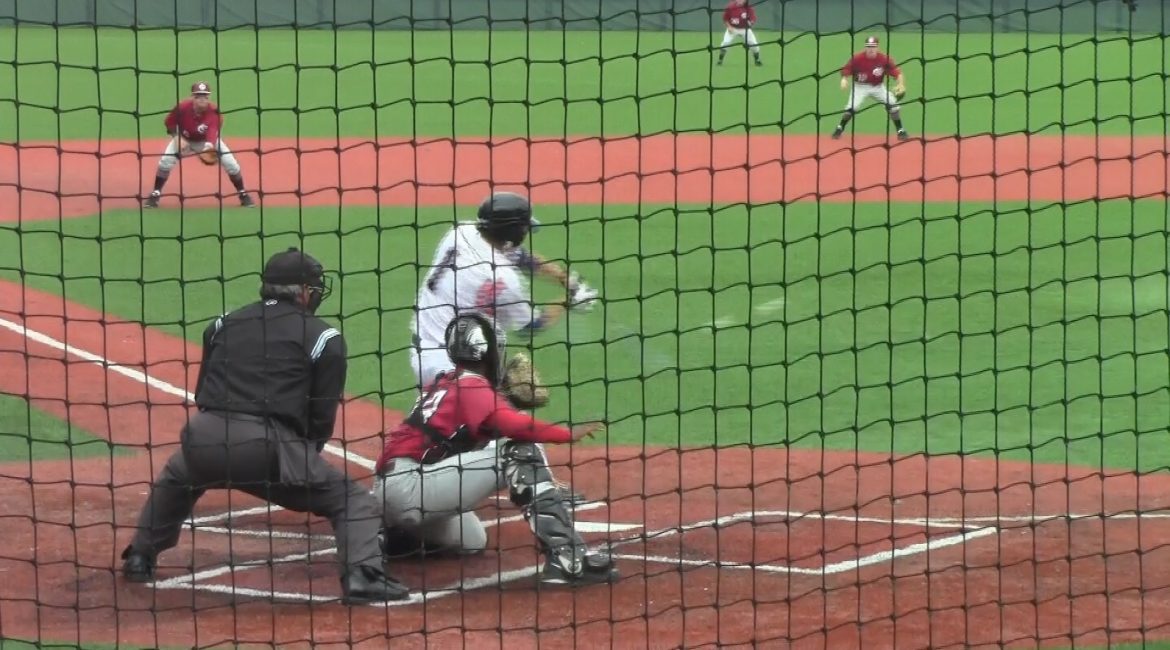 This is big weekend time for the college teams in the area.  For one of them it is the last big weekend, in what has been a series of big weekends.  For the other they start its elimination kind of playoffs and got off to a good start.

If Sonoma State is getting tired of playing Cal State Los Angeles, it didn’t show in the Seawolves opening game in the Western Regional.   Playing Cal State LA for the fourth straight game and eighth in the last sixteen, Sonoma State jumped out early and went on for an easy 11-2 win to move into the winners bracket.

Devon Zenn had a season high five RBI, four of them by the time the second inning was over.  In the first, he hit a single that drove in one of a two run first.   In the second, he hit a three run double to wrap up a four run second that gave Sonoma State a 6-0 lead.  The rally started with two out and no one on and all four runs were unearned.

Harmen Sidu went eight innings, striking out nine to raise his record to 10-1.

Sonoma State, who is ranked No. 23 in the country, is now 35-20 on the season.   They are 2-2 against Cal State LA over the last two weekends, and in those eight games dating back to the weekend of April 17th they are 5-3.

Sonoma State doesn’t want a repeat of last weekend when they won the first game they played against CSLA in the CCAA post season, and then lost the next two against them.

Of course they may not have to worry about CSLA again.  They start Day 2 with an elimination game against Cal State Monterey Bay.

THE END IS NEAR

The SRJC Baseball team is at the final stage.   They begin the State Final Four Double Elimination today (Friday) in Fresno City when they meet Cypress in a first round game.   SRJC, who is 33-7-1 on the season, is looking for its third state championship in school history.   They won the other two in 1952 and 2005.

Both first round games have a similar look to it.  In each game a No. 1 seed is meeting a Mid-Range seed.  The way the first day works is the Highest Seed from one end of the state meets the No. 2 from the other.  That Mid-Range seeds are still going means they pulled off upsets along the way.

SRJC and the South No. 1 seed Fullerton were No. 1 and No. 2 in the state in the final rankings of the season before the playoffs began, so they were favorites to go this far.   The other two teams, Feather River from the North and Cypress from the South were No. 22 and No. 24.

SRJC meets Cypress in the first game of the tournament which starts at noon.  Cypress was a No. 9 seed in the South part of the bracket.  After winning its best of three series 2-0, they lost the first game of the double elimination part last week and then won four straight elimination games to get to this point.  In the first of those Elimintion Games they trailed 3-0 in the 7th before rallying to take a 5-4 win with a three run ninth.  Cypress is 29-14 on the season.

The other first round game starts at 6 pm between No. 7 from the North, Feather River and No. 1 from the South, Fullerton.  Feather River won the Nor Cal round that ended the season for Sierra, who tied SRJC for the Big 8 championship.

There are three post season tournaments in the high school world in preview to the North Coast Section picks on Sunday.

Last week Cardinal Newman cost Casa Grande a perfect run through the League Season with a 4-2 win.    Casa Grande had won two one run games vs. Cardinal Newman earlier in the season.   In the first win, which was in the Adam Westcott Tournament, Casa Grande rallied from a 3-1 deficit and scored two in the bottom of the seventh for a 4-3 win.

Both teams will be in the NCS Division 2 playoffs, Casa Grande probably as a No. 1 seed.

No. 4 Sonoma Valley vs. No. 2 Petaluma…7 pm at Arnold Field Sonoma

This is a rematch of last season’s championship game won by Petaluma 2-1.  Sonoma Valley was regular season champions last year and defeated this year’s undefeated champion Analy 4-1 in the first round.

Petaluma is a bubble team for the NCS Division 2 playoffs and may need this win to get in.

Petaluma has won 22 straight and should be a No. 1 seed in the NCS Division 2 playoffs.

Analy is coming off back to back games with Sonoma Valley.  They lost on Wednesday 5-1 which ended the regular season.   That left the two teams tied for second in the league race.  They had a tie-breaker of sorts yesterday with a 7-4 win to advance to the championship game.

St. Vincent ended the regular season with a 7-5 non-league win over El Molino.  It raises its season record to 18-4 and also gave Manager Gary Galloway his 500th career win.  Galloway has been manager of the team since 1984.

St. Vincent will get at least one home game in the NCS Division 5 playoffs.