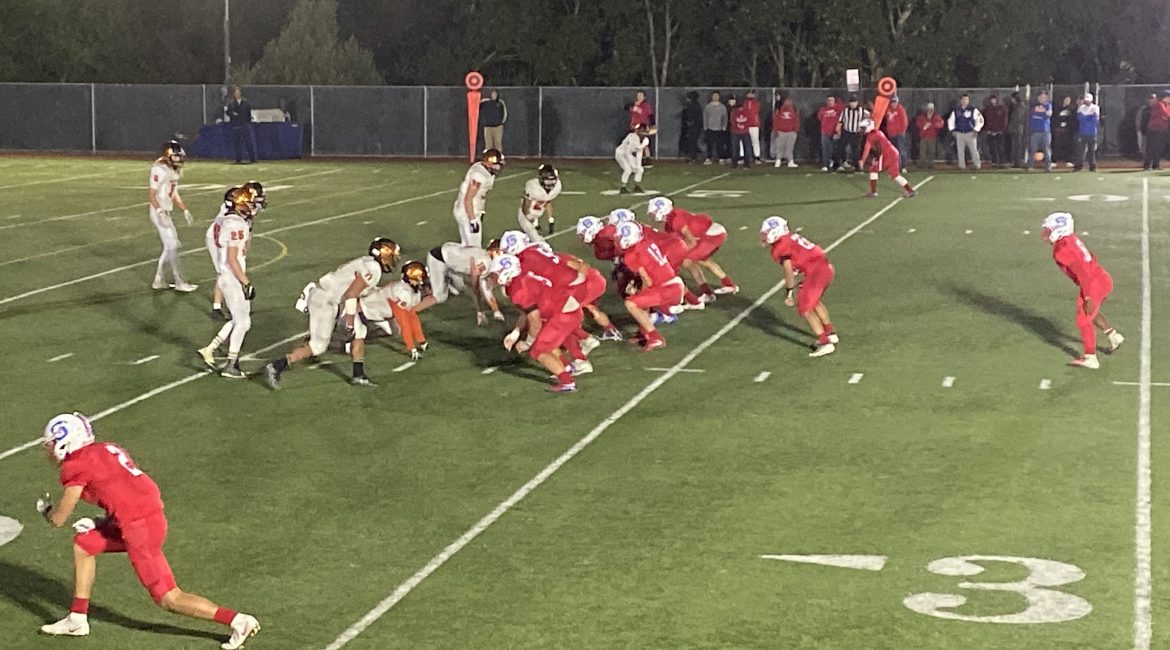 “Man that was fun. I haven’t had that much fun in a long time.” Said St Vincent Head Coach Trent Herzog.

With 55 seconds remaining in the game and trailing 44-43, Jacob Porteous found Jeremy Bukolsky for a 68 yard touchdown catch to give St Vincent the lead. Porteous then threw a pass to Rory Morgan to convert the two point PAT to open up the seven point lead late.

CSD tried to comeback, but Miles Gonzales took a knee with 14 seconds left, instead of trying to spike the ball, and couldn’t recover in time.

“This is in my top 3 games ever. Had some great ones across town (at Casa Grande) but this was an unbelievable game.” Herzog said postgame.

“I’m so proud of my guys. We faced adversity and we responded the right way.” Herzog continued.

The scoring started 10 seconds into the game. Calel Aramboles took the opening kickoff 81 yards all the way to the endzone and a quick CSD 6-0 lead.

St. Vincent (9-1) struggled offensively to start, but then put a drive together. The drive ended when Porteous found Bukolsky for the first of three passes from 20 yards out to give the Musangs a 7-6 lead with just over a minute to play in the opening stanza.

The Eagles didn’t take too long to score again, eight seconds into the second quarter, as they leaned on Aramboles to lead them down the field, and he finished the job for his first offensive touchdown of the night, a five year run, to put them up 13-6.

“He’s (Aramboles) an All American. He’s got Division 1 talent. He will be a fantastic player down the road.” Herzog said.

St Vincent then leaned on their running back. Kai Hall ran the ball down the field and finished off their drive with a touchdown, a three yard scamper to put the Mustangs back up 14-13.

They got the ball back and Porteous and Bukolsky connected for their second touchdown pass of the game, a six yard score to make it 21-13 St Vincent heading into the half.

Well, in the style of the Carpenters, the game had only just begun. The epic back and forth was coming.

Andrew Kohler opened up the second half with a 10 yard touchdown run to open up a two score lead for St Vincent at 28-13.

CSD’s big play capability came back as Gonzales found Jaylen Johnson for a 77 yard touchdown pass, and the Eagles were back on the offensive roll. They cut it to 28-21 Mustangs.

Kohler then had another touchdown run, a two yard score to open it back up to a 35-21 lead.

CSD (5-3) then took their second kickoff return for a touchdown, as Johnson did the honors this time, bringing it back 82 yards to cut it back to a seven point game once again.

“He’s a great athlete. He was tough for us to stop tonight, along with Aramboles. He made some great plays.” Herzog said

St. Vincent was going in to score on their next drive. Just over eight minutes to go, a pass was completed to Morga, but he fumbled inside the five yard line to give the Eagles new life. It would be a very great life. A double reverse pass that ended up in the hands of Aramboles, who then threw to Leonardo Vergara and had burned the St Vincent defense deep for a 95 yard touchdown pass. A bad snap on the PAT wasn’t a problem, as Vergara took it and was able to avoid Mustang defenders to get into the endzone to give CSD a 36-35 lead.

“I think we were so focused on Aramboles, that it hurt us and they exposed us.” Herzog said

After trading empty possessions, St Vincent got the ball back, and with 2:31 remaining, Kohler found the end zone for touchdown number three, his biggest one, from five yards out. Porteuous completed the pass to Morgan for the two point PAT to give the Mustangs a 43-36 lead.

CSD again relied on the big body of Aramboles and he gave them some big plays to set up inside the red zone. He then punched in a three yard touchdown run, and they went for two trailing 43-42, and they converted. Gonzalez threw a perfect ball to Johnson, who battled with Dante Antonini but eventually was able to secure the ball for a 44-43 CSD lead with 1:58 remaining.

St Vincent had rented out lights for the last two weeks to play at night rather than the afternoon.

“It definitely helps playing under the lights. Our crowd tripled the past two weeks. We had amazing support, and it was very loud in that final quarter. I could barely hear my other coaches. The atmosphere was awesome.” Herzog concluded.

Porteuous was 12-19 passing for 147 yards and three touchdowns. Kai Hall rushed for 272 yards on 29 carries with two touchdowns.

St. Vincent has a bye before awaiting their fate in the North Coast Section Division 7 playoff seedings.

California School for the Deaf will host the Oakland Military Institute next Thursday to close the regular season.