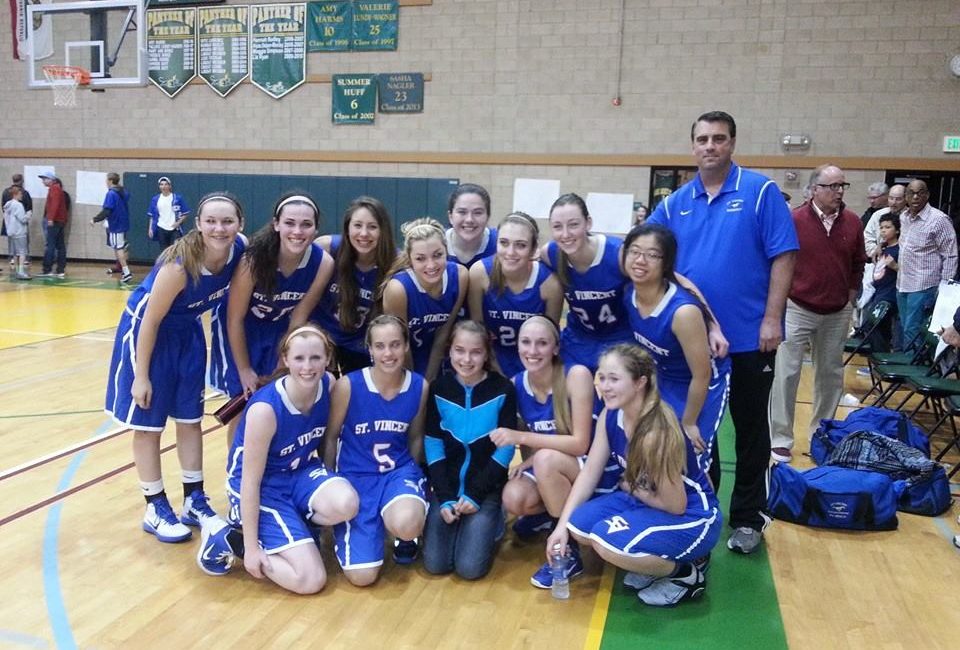 By Daniel Poulter
How does a team on the road, who scored only ten points after two quarters and shot less than 10% from the field at halftime, upset the number two seed in the North Coast Section Division 5 girls’ playoff? Defense… Defense … Defense…
The sixth seeded Saint Vincent Mustangs basketball team upset the No. 2 San Domineco Panthers of San Anselmo Wednesday evening 33-30 to advance to Saturday’s NCS D5 championship game against fourth seeded International of San Francisco. The Jaguars also pulled something of a stunner to knock off the top seed Valley Christian.
San Domineco usually feature one of the tallest players in the North Bay, Aminat Oladunjove a 6’4 junior who averages close to a double-double a game, but did not play on Wednesday because of an injury. This left the Panthers short-handed on the night, fielding only 6 players. Saint Vincent struggled mightily in the first half to find their offensive groove, shooting 0-of-12 from the three-point line. However the Mustangs showcased a lockdown and swarming defense holding the much taller San Domineco to only a six-point half time lead.
Saint Vincent came out of the half time break and upped the defensive tempo with a suffocating full court press. Trailing early in the third quarter by eight points to the Panthers, the Mustangs needed to improve their offensive game or face a repeat of their earlier regular season match up when San Domenico beat Saint Vincent 39-29 in Petaluma. Finally the shots began to fall at the end of the third quarter with long range efforts from Maddie Perry, Rebecca Dodele and Grace Jennings to briefly give Saint Vincent the lead 19-18 before San Domineco rallied for a 23-20 advantage heading into the fourth quarter.
After three straight quarters of harassment from Saint Vincent’s tireless defense, the wear and tear of the press began to take its toll on the six-player roster of San Domenico. During the fourth quarter the Panthers committed 9 turnovers to the press of the Mustangs. San Domenico had a chance to send the game into overtime with five seconds remaining down by three points, but the home squad couldn’t get off a three-point attempt. Ellie O’Neill led the Mustangs on the night with eight points and eight rebounds while Rachelle Nagler was the leading scorer for San Domineco with 12 and fellow Panther Daria Jackson led all players with 10 rebounds.
Share