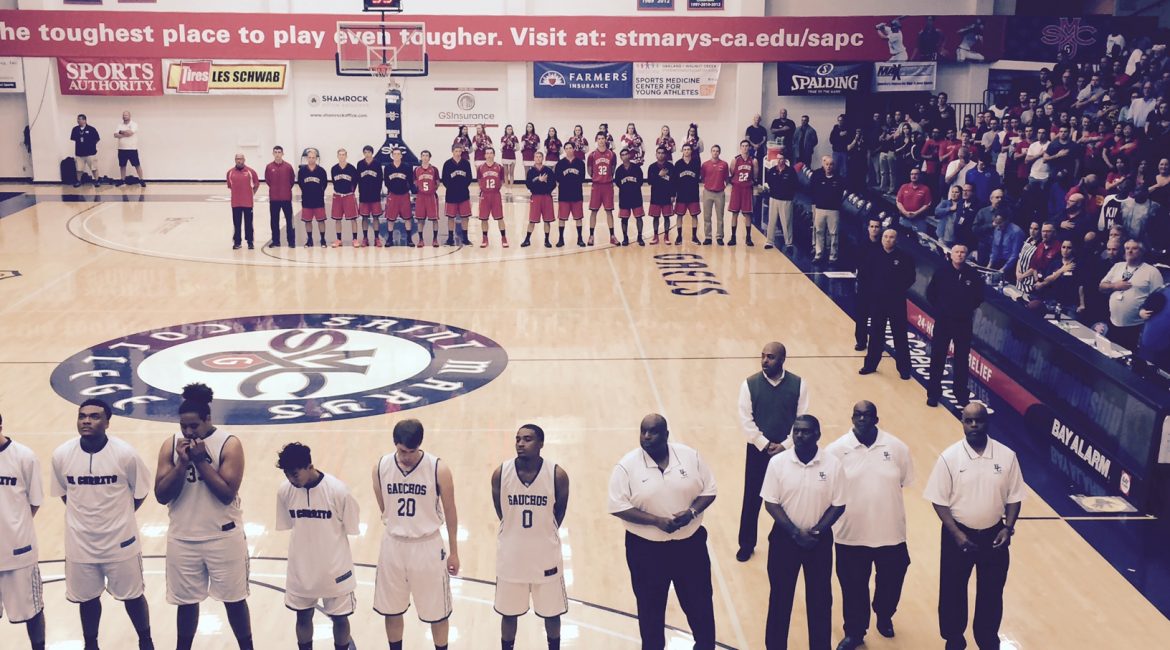 One way to bounce off the sting of not winning a North Coast Section championship is to get a good draw in the next stage of the state championships.
Round one of the Nor Cal playoffs begins on Wednesday and the three local powers this season all got first round byes and play their first game on Saturday.
Both the Cardinal Newman teams and the Montgomery Boys received the best news they could hope for.
The Cardinal Newman teams are seeded as high as they could be.
The Boys are the No. 2 seed in Division 4. The No. 1 seed is Marin Catholic, who defeated Cardinal Newman 61-54 in the NCS Division 4 championship game at SRJC on Friday Night.
The Cardinal Newman Boys will host the winner of the Wednesday first round game between St. Patrick-St. Vincent and Half Moon Bay on Saturday at 6 pm. St. Patrick-St. Vincent was the No. 2 seed in the North Coast Section Division 2 playoffs, and lost in the semi-finals to Marin Catholic.
Cardinal Newman is hosting a Boys-Girls doubleheader on Saturday.  The Girl’s team took advantage of the Open Division bracket, and got a No. 1 seed.  They will meet the winner of the Anderson-Notre Dame first round game.  That game is scheduled to start at 7:30.
The Cardinal Newman Girls received the No. 1 seed in Division 4, because the two teams that played in the NCS Division 4 championship game were pushed up to the Open Division.  That was the same thing that happened to the Cardinal Newman Boys team two years ago.  After losing the NCS Division 4 championship game to Salesian, they were given the No. 1 seed in the Division 4 Nor Cal playoffs as Salesian was pulled up to the Open Division. The Cardinal Newman Boys parlayed that to a State Championship game and this year’s Cardinal Newman Girls are capable of doing the same thing.
A similar thing happened with the Montgomery Boys.  El Cerrito, who defeated Montgomery in the NCS Division 2 championship game on Saturday, was pushed up to the Open Division.  The Montgomery Boys received a No. 3 seed. The top six teams in the Division 2 bracket all got first round byes, so Montgomery knows the second round game will be at home, against No. 6 Cosumnes Oaks, a school from Elk Grove. That game will be Saturday at 6 pm.
The other two local Boys teams, Archbishop Hanna and Anderson Valley, are both in Division 6, which is an eight team bracket and have the first round game on Wednesday.  Archbishop Hanna, who lost a tough one in the NCS Division 6 Championship game to St. Bernard Catholic on Saturday, received a No. 4 seed and a home game against Valley Christian of Roseville. Anderson Valley drew the short stick and is a No. 8 and has a trip to Redding for a game against No. 1 Liberty Christian.
Archbishop Hanna defeated Anderson Valley 83-76 in one of the Semi-Final games in the NCS Division 6 brackets.
Two other Girls teams are in and are hitting the road for the first round game.
Windsor is the No. 10 in the Division 2 bracket and travels to San Jose to meet No. 7 Presentation.
In the Division 6 bracket, Round Valley received a No. 5 seed and just missed a home game.  Instead they will travel to Roseville to meet No. 4 Valley Christian.
My email address is jacpasquini@comcast.net
You can also now follow me at twitter @homer2612
Share