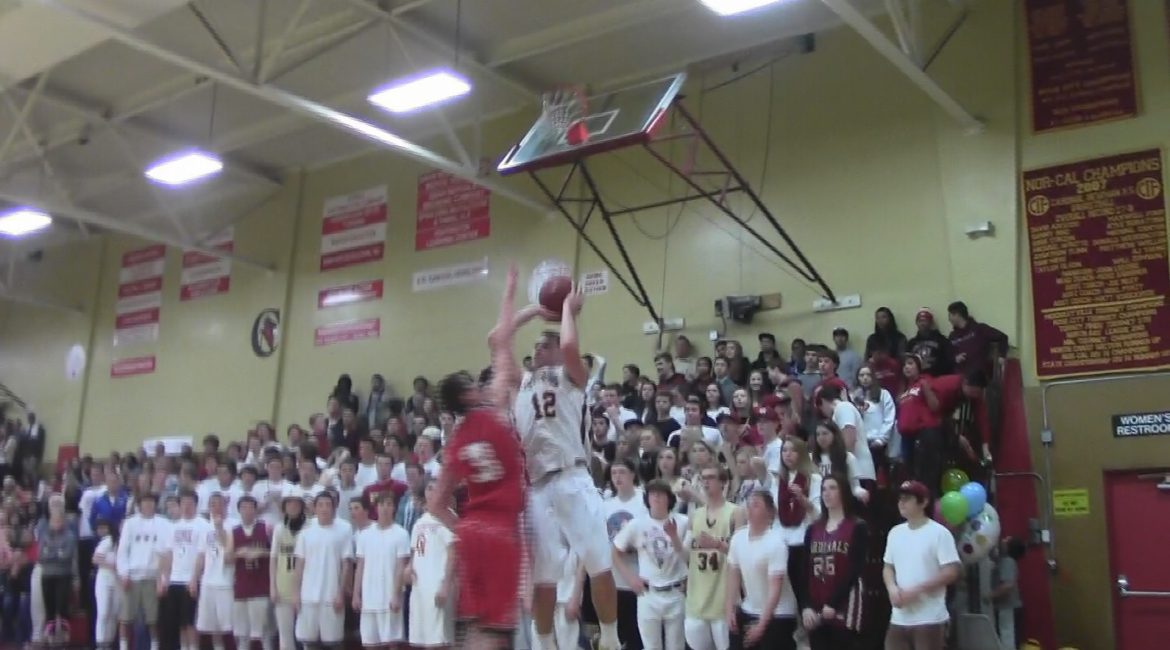 Now that No. 1 Montgomery has wrapped up the NBL Boys Regular Season championship, the next step is the NBL Post Season tournament.

On Wednesday Night, in its last home regular season game, Montgomery defeated No. 5 Maria Carrillo 65-55.  The championship is the Viking’s third in five seasons and the ninth for head coach Tom Fitchie since he began coaching at the school in 1984.

Montgomery has a 20-5 record on the season.  It is the fourth time in five seasons and ninth in thirteen that the Vikings have hit the twenty win mark.

Montgomery will end the regular season on Friday Night when they travel to No. 8 Casa Grande.   Just because Montgomery has everything wrapped up as far as the league race is concerned and the No. 1 seed in the NBL Post Season Tournament that goes with it, that doesn’t mean they have nothing to play for.

The Vikings are shooting for the No. 1 seed in the North Coast Section Division 2 playoffs. Montgomery is looking fairly good for that.   They are No. 1 in the power rankings and have a win over No. 3 College Prep, who has a win over No. 2 Newark Memorial.  Newark Memorial has had a tougher schedule (according to the power rankings) and has the history by winning the last two section titles.   They also have a 15-7 record and have won ten straight, so nothing is a given.

Then there is revenge factor.  The first time the teams met, Casa Grande pulled the upset of the league race with a 60-50 win.  It is Montgomery’s only league loss.

Casa Grande can already claim they are the only team to defeat Montgomery in league play and to go 2-0 would be a season saver for them.  But Casa Grande is playing for more than bragging rights.

Casa Grande has to win to have a chance to make the NBL post season tournament.  It wouldn’t hurt the cause for getting a home game in the first round of the NCS Division 2 playoffs.

A win for Casa Grande isn’t the only thing they need to get into the NBL Post Season Tournament.  They also need Ukiah to lose to Cardinal Newman on Monday. Ukiah is at Windsor on Friday and a loss in that game won’t affect Casa Grande’s chances.

The first tiebreaker is head to head and the two teams went 1-1 against each other.

The third tie-breaker is numbers drawn before the season started.   Ukiah drew a five and Casa Grande drew an eight, so Ukiah has the advantage there.   That’s why if Ukiah loses to Windsor and beats Cardinal Newman both teams would be 2-4 against the three playoff teams and then it would go to the numbers.

The other first round game will be Cardinal Newman vs. Maria Carrillo.  This last weekend will decide where that game is at.

Cardinal Newman is 9-3 in league play and is at Santa Rosa on Friday and then has that Ukiah game at home on Monday Night.

If Cardinal Newman wins both games they will host Maria Carrillo.

Maria Carrillo has a better number than Cardinal Newman if it gets to the third tie-breaker, which it might.

It is unlikely that the Monday Ukiah-Cardinal Newman won’t mean something to someone.  It will be clearer after Friday exactly what that would mean.