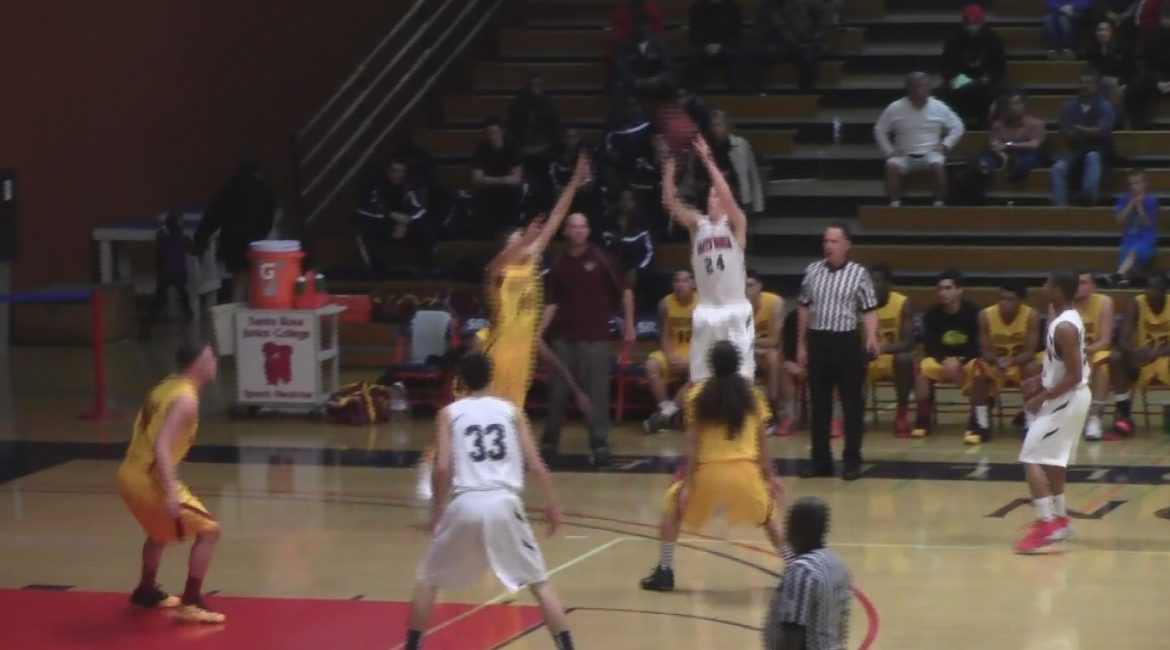 This week’s version of Championship night didn’t go well for the local teams for the most part.

One that went well was the SRJC Men’s game, who may have turned their season around.

The Bear Cubs went into the Kris Kringle Classic with a 3-6 record.   After taking the tournament championship they have raised that record to .500.

The Bear Cubs wrapped up the title with an 85-74 win over Yuba.    Matt Hayes was the leading scorer with 23 points.  It was the second game this year he hit the 20 point mark.

Alec Kobre scored 15 points and was named player of the tourney.  All of his points were on three point shots.  For the tournament he hit seventeen 3 point shots while averaging over 18 points a game.

SRJC has one more game before conference play.  That isn’t until January 4th when they travel to Redwood.

There was one other tournament champion and that was the Windsor Girls who took the East Bay-North Bay Challenge with a 50-38 win over California to raise its record to 7-1.  Kerianne Noonan sewed up Player of the Tournament honors with 34 points.

The third place game was between two NBL teams.  Casa Grande is 4-2 after a 32-16 win over Maria Carrillo.

There is one more chance for a tournament championship.    The Cardinal Newman Girls advanced to the Oak Ridge Tournament Championship game with a 56-46 win over Kennedy of Sacramento.   Kylie Kiech led the way with 26 points as the Cardinal Newman raises its record to 5-2.

Cardinal Newman will play the Championship Game on Monday Night against Oak Ridge.

There was so good news in non-tournament action coming out of Santa Rosa.   For the third year they had an event called the Santa Rosa-Novato Jamboree in which all the games were won by Santa Rosa.

Meanwhile the Santa Rosa Girls continue to roll.  It was a pick the score kind of game in a 77-29 win over Novato.  Santa Rosa had a 33 point first quarter to go to 6-0.  Morgan Bertsch scored 23 points and had seven blocks.

As for the other tournament play, it wasn’t a good night.

The worse was at the Brett Callan Memorial Tournament were all four local teams ended the tournament with a loss.

That included in the championship game in which Casa Grande lost to Fairfield 58-53.   This was a tight game that had 10 ties and seven lead changes.

The last lead change came with two minutes left when Matt Anstein hit a three pointer to give Fairfield a 53-51 lead.    That started a seven point run to put things away.

Cetrick Yeanay led Casa Grande with 25 points, but didn’t score in the last six minutes of the game.

Casa Grande, who is 6-3 on the season, is now 1-5 in championship games of this tournament over the last seven years.

Alec Raven and Kiel Long each scored 11 points.   Montgomery got off to a good start leading 20-14 midway through the second quarter.   Freedom took the lead for good midway through the third quarter and a 9-2 run gave them a 45-35 lead with five minutes left.

There will be one more barrage of tournaments after Christmas.

There will also be one more post here.  Later today there will be a fans view of the Best Ten Moments at Candlestick Park.  The fan is me.

Besides that to all the YSN365.com fans