THIS AND THAT: GETTING TO THE NEXT LEVEL 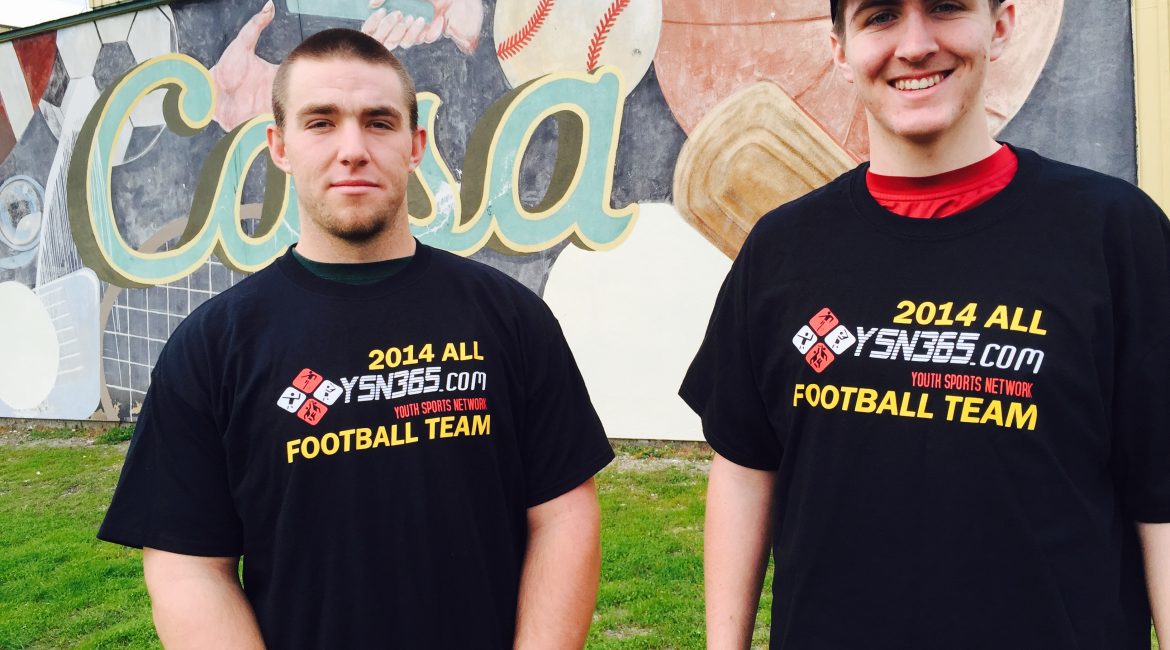 After the year that Cardinal Newman grad Scooby Wright had at the University of Arizona, I wondered out loud, who could be next?
If you go by numbers and nothing else keep an eye on Casa Grande.  Signing day is on February 4th and two are signing for a full ride at a Division 1 college.  One is Kicker Matt Abramo, who will be going to Washington State.  The other is Linebacker Casey Longaker, who will be attending Sacramento State.


That might not be all.  There might be three more from Casa Grande signing a college football scholarship. If all five sign that would be a school record.
The Casa Grande football program having players sign is not anything new.  Over that last ten years there has been 15 players recruited to Division 1 and in the range of twenty more to Division 2 or 3.
There is a reason for that.
Casa Grande Head Coach Trent Herzog considers it part of his job to use his contacts to help the players who can move on to the next level.  He says, “They give me everything they have all year around.  They do everything we ask of them. The least I can do is help them get to college using football.”
Herzog not only helped in the process for his own players, but has helped others.  He has helped Rancho Cotate’s Chris Taylor Yamanoha and Maria Carrillo Alex Netherda.  Taylor-Yamanoha has had offers from Louisiville, Washington State along with four other schools and more are expected after signing day.  He is a junior so this isn’t his official signing day.  Netherda has an offer from Humboldt State.
Obviously, these kids are talented, but it takes more than that. So many parents and kids still think that if you are good, the colleges will find you. That isn’t as true anymore. With social media, programs are overwhelmed with prospects. You have to really stand out or be connected.
Trent helps them on getting connected and deserves a high five.

Taylor-Yamonoha ‘s dad Rudy is trying to take the information he has gotten from Trent and has tried to help the local kids.  He says, “We have tons of talent here that goes unnoticed and under the radar.  They just need a way to get there name out and exposed.”
So he is trying to do his best to get them noticed.  Rudy says it is all about NETWORKING.
He deserves a high five too.
If you are looking for a starting  point, Trent and Rudy aren’t a bad place to get some advice.


MORE FOOTBALL PLAYOFFS?
This week there will be a vote to expand the State Football Playoffs.  The plan is for a few more teams and games. One plan includes two Open Division Championship games instead of one.  There is also a move to go from five to thirteen State Championship games and all section champions would be eligible for the regional title games, which would add more games to that.
The North Coast Section voted no to the proposal last week and plans to do the same when the official vote takes place. They are concerned about how long the season is now.  They seem to be the minority though.  At least three other sections have voted yes.
Teams played up to sixteen games to win a state title last season.  That is more than College teams play for the NCAA championship.  To win a Super Bowl it takes, at the most, 19 games.
Stay tuned.
CONSOLATION FOOTBALL GAME
Believe it or not the Central Coast Section has teams play a game after they are eliminated called the Consolation game. Serra football coach Patrick Walsh didn’t like that idea and forfeited that game last season.  The CCS didn’t like the move and has suspended the school two years from the State playoffs and fined more than $6,000.
Do we really need a Consolation Football Game?  Talk about your money grab.
Serra can appeal the decision.  Good luck to them on that.
JC MENS RACE
The SRJC Mens Basketball team, the defending state champions, is in quite a league race.
Going into the weekend seven of the eight teams in the Big 8 race were within one game of first place. It has loosened up a bit, but still very tight.  Now six teams are within one game of first place and the seventh team is two games back.
The conference reaches the halfway point on Tuesday, when SRJC hosts Cosumnes River, who both with a 4-2 record, are two of the three teams tied for first place.  The other team tied is Sierra, who has lost to both SRJC and Cosumnes River.
It is that crazy of a race.
By the way, none of the Big 8 teams are ranked in the State Top 20.

MORE MAXPREPS
For teams that take time to put the stats at MaxPreps.
BOYS
Nate Hale, Ukiah…The junior is averaging over nine points a game. His game high was 15 in a 72-56 win over Arcata.
Ryan Wilibanks, Sonoma Valley…He is a senior averaging 10.8 a game.  He has scored double figures in four of the last five games.
Dakota Woltering, Archbishop Hanna…The junior, from the Sonoma school, is averaging 13.8 a game and nearly seven rebounds.  He has scored in double figures in the past seven games, including a 30 point game in a 75-67 win over South Fork.  Archbishop Hanna is in sole possession of first place in the Small Bridge School League.

GIRLS
Jessica Barbosa, Windsor…Welcoming Windsor to using MaxPreps.  The only starter on the team that isn’t a freshman and is averaging 15.5 points and 11.3 rebounds a game.  In all but two games, she has had a double-double.
Natalie Karlson, Upper Lake…The sophomore is averaging 13.0 a game.  She has scored in double figures in six of the last seven games.
Sophia Nielsen, Summerfield Waldorf…Another sophomore, averages just under 10 points a game.  She also averages six rebounds and over five steals a game.  She had a season high 11 rebounds and eight steals in the same game.
My email address is jacpasquini@comcast.net
Share