THIS AND THAT: MAKING THE BIG TIME 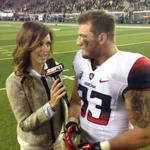 Scooby Wright had a brilliant football career at Cardinal Newman High School.  It didn’t end the way he wanted it to.   His final football game of his high school career was a much anticipated NCS Playoff game against Marin Catholic.   He caught a 24 yard touchdown pass in the first quarter to give Cardinal Newman a 17-0 lead.   Moments later he was injured and missed the rest of the game.   Marin Catholic rallied for a 42-37 win.
Scooby has been heard from again.
Now he has started a pretty good career going at Arizona University.   He turned some heads last season, so much so he was named to the Freshman All-American Team.
He has turned some more heads this season and last Thursday he turned the whole nation’s heads.
Arizona met No. 2 Oregon last Thursday night in a game that was nationally televised on ESPN.  Wright was named player of the game mainly because of strip and fumble of Oregon quarterback Marcus Mariota with two minutes left which preserved a shocking 31-24 win for Arizona.  It wasn’t all he did in the game.   He also had seven tackles and a sack.   After that play and that game, there he was doing an interview on ESPN


Arizona is now 5-0 on the season.  Two weeks ago they defeated California in an incredible game 49-45.  It was a game that fifty points were scored in the fourth quarter, thirty six of them by Arizona.   The last six came on a hail mary on the last play of the game from 47 yards out.
MARIN CATHOLIC AGAIN
With the earthquake in recent memory, it is probably not to proper to use the phrase shocker in the sporting sense, but there was a shocker in high school football on Thursday Night and it happened in Napa.
Justin Siena defeated Marin Catholic 3-0.  The only score of the game was a second quarter field goal.
The loss snapped a thirty seven game winning streak for Marin Catholic in Marin County League play.   The last loss was on November 15th, 2008 by a 21-0 score to Novato.
That score not only throws the Marin County League race into a mess, but it does the same to the NCS Division 3 playoff scenarios too.
Going into the game Marin Catholic was the No. 4 team in the Division 3 power rankings.   Analy is No. 3 and Cardinal Newman No. 5.   Rancho Cotate has decided to be in Division 3 and they are at No. 7.
3-0 ?
The Justin Siena 3-0 win over Marin Catholic doesn’t look right.   Is it soccer, baseball or maybe volleyball?  Nope it is football.
That doesn’t seem like a realistic score with all the offenses in football.  Last week all eleven games that we covered here had a higher score than that after the first quarter!
It did get me thinking about the last time I could remember a 3-0 score around here.
The best I could come up was November 11th, 2004 in a Egg Bowl game when Casa Grande defeated Petaluma by the same score.  That game was played in a downpour and in very muddy conditions at Casa Grande High School.
This game didn’t have that excuse.
My email address is jacpasquini@comcast.net