THIS AND THAT: OPENING WEEK RECAP 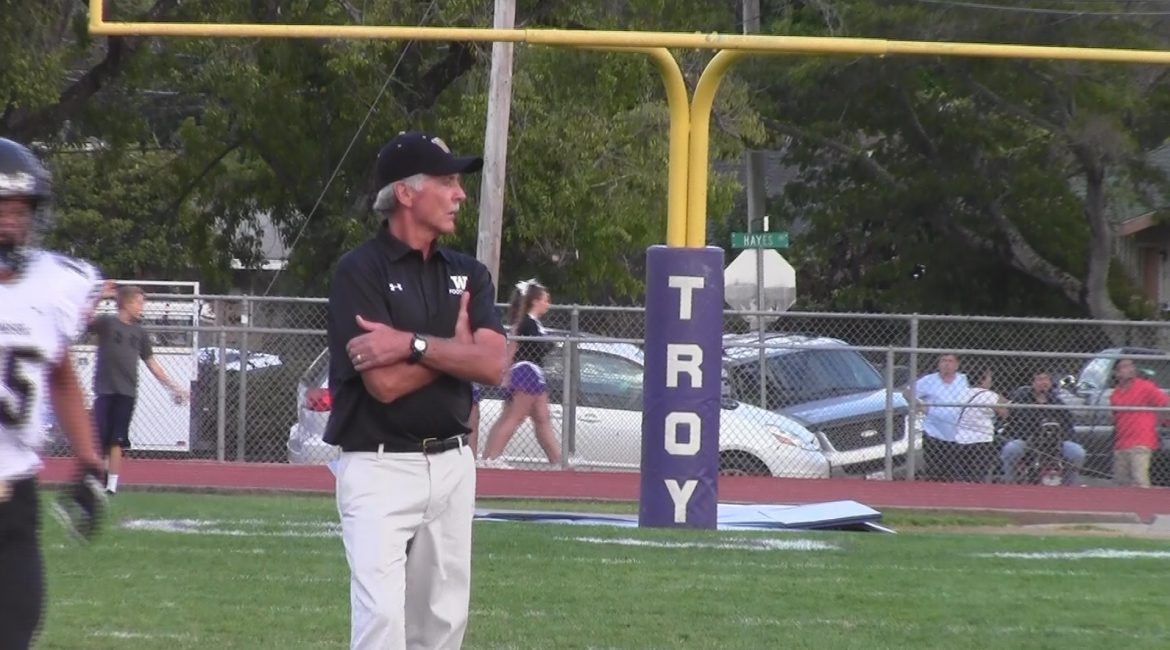 For the most part I didn’t have a very good view of the first week of the high school football season. On one hand, it was a great view. I spent the weekend in Brookings, Oregon for my nephew’s wedding.
It was a weekend in which I experienced something that I haven’t in a while and that was a real rain storm. It was a very restless Friday night, as a storm rattled the cabin we were staying in, hammering it with wind and rain. It also rained off and on Saturday and then rained pretty heavy again overnight. The weather made for some nervous moments about the Saturday evening wedding, which was outdoors. There was a sprinkle or two, but that was it and the ceremony went on.
DE LA SALLE LOSS
This is the best view I had for the North Coast Section and was the North Coast Section’s biggest story.  Anytime De La Salle losses, it is the North Coast Section’s biggest story.
Like my trip to Brookings, the weather had an effect on the game. It was televised on ESPN2 and was supposed to start at 6. I figured I would get to see the first quarter before leaving for the wedding. Because of thunderstorms, which we didn’t have in Brookings, the game was delayed long enough where I was able to see most of the second half.
Twitter was going crazy and had some crazy comments. It was De La Salle’s first ever game against a team from Texas. One person wrote midway through the fourth quarter that a loss would undo three decades of dominance, which was laughable. Another guy had a ready-made excuse in place by posting that there was no doubt the De La Salle was the best team, but turnovers and mistakes were costing them the game.
There was a defensive touchdown in the first half that turned the game around for the Texas school. But from what I saw and the stats seem to back it up, it was an even football game. I actually found myself rooting against De La Salle. Seeing them lose didn’t hurt at all. Based on the twitter feeds, the fans and people who cover them didn’t take it so well. A De La Salle loss reminds me of when I was much younger and the UCLA basketball team lost. They were both such rare occurrences, people don’t quite know how to react to it.
TRAVELING TEAM
Cardinal Newman almost had as big of a trip as I did. They traveled to Crescent City and couldn’t have asked for a better start to the season, in both the way it began and the overall results. Junior Damian Wallace got the season off to a roaring start by returning the opening kickoff of the season 78 yards for a touchdown. It was Wallace’s first of four first half touchdowns in a 62-19 win over Del Norte. Cardinal Newman had a 55-19 halftime lead. The competition level figures to go up this Friday when they play their home opener against St. Mary’s of Stockton.

SMASHING DEBUT
After taking a couple of years off after two long successful runs at Healdsburg, Tom Kirkpatrick made his debut as head coach for Healdsburg’s ex-arch rival Windsor and showed he hasn’t lost his touch. Windsor defeated Petaluma 21-9. That was one of two NBL-SCL games. The SCL got the split as Analy defeated Casa Grande 48-29.
HE’S BACK
You wonder how well Fort Bragg would have done in the playoffs if quarterback Kaylor Sullivan wouldn’t have been injured in the next to last regular season game against Cloverdale. Sullivan passed for over 3,000 yards and threw 29 touchdowns before the injury.
Now a senior, he is back and healthy. Wallace threw for a school record 492 yards and seven touchdowns in a 54-8 win over South Fork. His leading receiver was Lucas Triplett with eight catches for 190 yards and four scores. Last season Triplett, who is a junior, had nearly 800 yards and 13 touchdowns. He took over as quarterback after Sullivan was injured.
WIN OF THE WEEK
In a week that there were no major surprises take your choice.
Cloverdale rallied from a 24-7 deficit to defeat Berean Christian 28-24. Luke Bernardi, who rushed for over 1,200 yards last season, returned a punt 70 yards with four minutes left for the winning score. Cloverdale went 6-5 last season, with one of the losses 40-21 to Berean Christian. It was the coaching debut for Chad Prieskorn.
Maria Carrillo went on the road on Saturday and defeating Redwood 17-7.  Maria Carrillo scored all its points in the first half. The Maria Carrillo defense had three interceptions.
In a battle of what are usually two NCL powers, St. Helena defeated St. Vincent 55-6. St. Helena had 392 yards of rushing offense.
Also, in wins of the week, you have to mention Analy. They were a team that had everyone graduating right?  The transition seemed smooth in the 48-29 win over Casa Grande. The Tigers won the game despite almost letting a 27-0 lead get away. It is junior quarterback Jack Newman’s team now and he looks ready. He had what is becoming a normal kind of start for Analy over the last couple of seasons. In the first quarter he passed for over 200 yards and four touchdowns.
One of the headline games next week is Analy at Maria Carrillo.
POWER RANKINGS (Next week will be the first YSN365.com rankings)
No. 1 Cardinal Newman (1-0)
No. 2 Rancho Cotate (0-0)
No. 3 Analy (1-0)
No. 4 Windsor (1-0)
No. 5 Maria Carrillo (1-0)
No. 6 Casa Grande (0-1)
No. 7 St. Helena (1-0)
No. 8 Petaluma (0-1)
No. 9 Fort Bragg (1-0)
No. 10 Montgomery (0-1)
My email address is jacpasquini@comcast.net
Share