THIS AND THAT: PLAYOFF NOTES AND BASKETBALL TOURNAMENT TIME

YSN 365 > News > News > THIS AND THAT: PLAYOFF NOTES AND BASKETBALL TOURNAMENT TIME 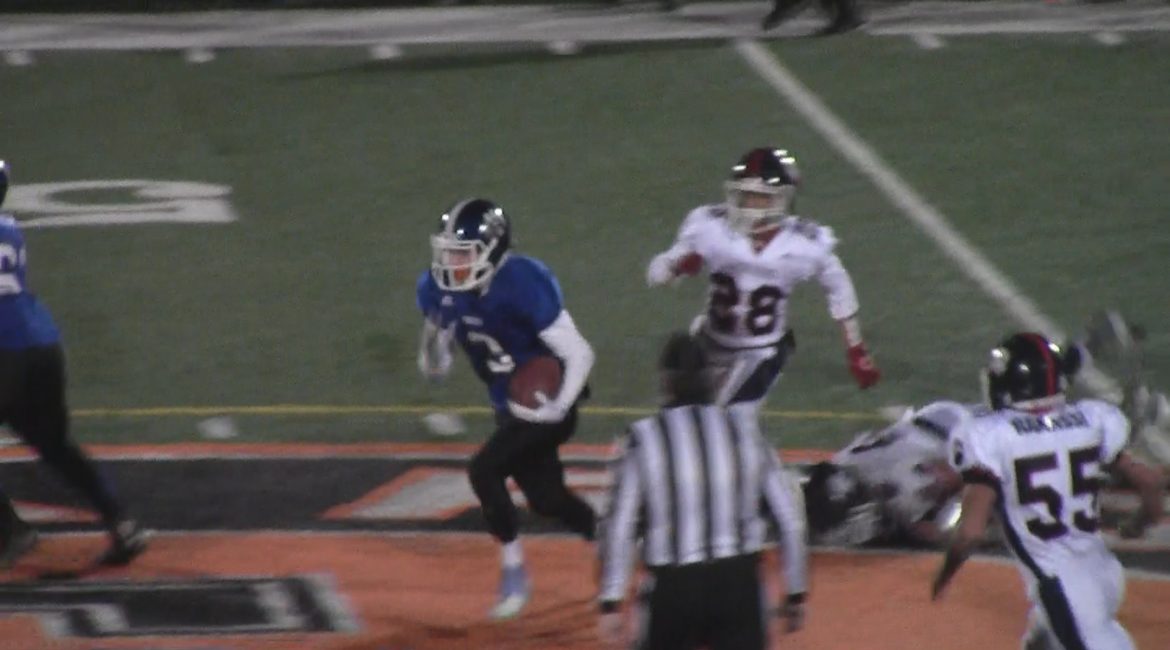 It took a while for the playoffs to start having games that felt like the playoffs. After two rounds of mostly one sided games, things got a lot closer last week.
The five divisions had ten games. Three of them had a one point difference and two other were decided by four or less. Even scores that look one sided games, weren’t. The Division 3 semi-finals had 12 and 18 point games, but both games were up for grabs in the fourth.
55-54
That was the score of one of the one point games, a Division 1 game between Foothill and Antioch, who both were 11-0 going in.

The two teams combined for 51 points in the fourth quarter. Antioch scored a touchdown with 1:02 left, went for two and failed. The game had four lead changes.
Foothill seemed to have control a couple of times in the second half, they had both a 16 and 15 point lead cut to one.
Earlier this season, Antioch defeated Rancho Cotate 54-14 in a game that sophomore running back Najee Harris, only playing the first half, rushed for 224 yards. In this game, he rushed for 390 yards and six touchdowns. For the season, he rushed for over 2,700 yards and 36 touchdowns. It was the second time he had a six touchdown game and has hit the 300 yard mark three times.
The reward for Foothill for winning such an exciting game is they get to play De La Salle, who hasn’t lost since the opener against a team from Texas. They won the second game 37-24 and since then it has been blow out after blow out. The closest game is 37 points, including two playoff games by scores of 47-0 and 70-14. Needless to say, they are overwhelming favorites to win their 24th straight section title.
The other one point game, besides the Cardinal Newman win, was St. Bernard Academy over Ferndale 37-36. The game had three lead changes and Ferndale didn’t convert one extra point.
This was the third win of the season for St. Bernard Academy over Ferndale, they met twice in league. The first game was 41-40 in overtime and the second was 34-28 with no overtime.
Ferndale, a No. 6 seed, was as close to a Cinderella as was left in the playoffs. St. Bernard Academy, who is coached by former Piner coach Matt Tomlin, is a No. 2 seed for the second straight season. Last year they lost in the semi-finals to St. Helena.
A TIGHT DIVISION
If the NCS needs a hint to change the playoffs and split the brackets into two tournaments, they could use Division 5 as an example.
The top five seeds received first round byes. Then three games that were played had scores of 35-0, 47-0 and 64-0.
Since then every games have been competitive. The most one sided game in the second and third rounds was 25-14, which is the game Middletown lost to St.Bernard Academy.
The championship game this Saturday is Berean Christian against St. Bernard Academy. To get to this game, Berean Christian won its playoff games by scores of 6-2 and 31-28. Yes that is right 6-2.
The other semi-final was the St. Bernard Academy win over Ferndale (see above).
NO BRACKET BUSTER
Despite all the close games, there are no Cinderella teams. Division 1 and 2 is No. 1 vs. No. 3, the other three divisions are No. 1 vs. No. 2.
BASKETBALL DRIBBLES IN
It is December and that means it is holiday basketball tournament time. The tournaments start rolling this weekend.


One is the second annual Cardinal Newman Classic which is hosted by the Girls team. This is an eight team tournament, featuring some of the power teams in the West, not to mention two of best teams in the area over the past few seasons, Cardinal Newman and Santa Rosa.
There are four games each day. The first game on Thursday and Friday starts at 3:30. That was the original plan for Saturday, but all the games have been moved to earlier in the day because of the Cardinal Newman football game. The first game will begin at noon and the event will end with the championship game at 4:30. See the Bracket Here
This tournament will be broadcast Live on YSN365.com. More details about the other teams in the tournament will be coming.
Also this weekend is the Russ Peterich Tournament at Montgomery High School and the Redwood Classic in Boonville, which features some of the best small school teams in the section. Both of those are Boys Tournaments. Also there will be the annual Sonoma Valley Girls tournament.
That is the start of at least a half dozen tournaments that are in the area this month and several others teams will be going out of the area for others.
Any information on these tournaments, like the brackets, let me know.
Also if you are a fan and go to your share of high school basketball games (Girls or Boys), we are always looking for help updating scores. If you are interested, contact me for that too. The support for that over the years from fans and parents has been outstanding and is one of the reason that the YSN365 Facebook and Twitter feeds are the places to go for updated scores.
My email address is jacpasquini@comcast.net
Follow me at twitter @homer2612
Share