THIS AND THAT: SETTING A HIGH STANDARD 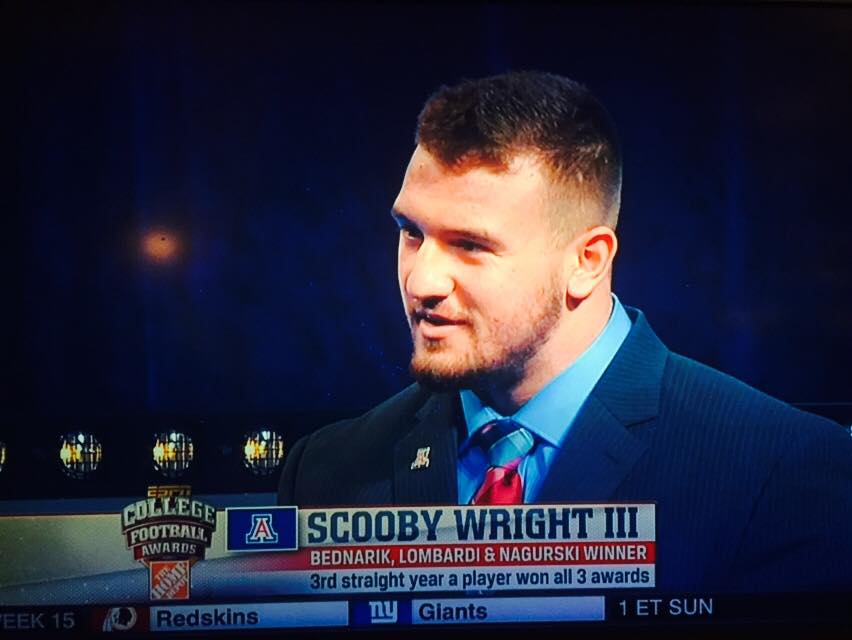 It isn’t much of a stretch to say that Scooby Wright is having the greatest college career of anyone who has made the big time scene from this area.
He has that honor and he is a sophomore.
Wright, who graduated from Cardinal Newman High School two years ago, has turned into a star at the University of Arizona.  He won three National Awards naming him the defensive and lineman/ linebacker of the year in college football.  He was also named the Pac 12 defensive player of the year and was ninth in the Heisman Voting.


Wright has joined a list of players from this area (the leagues we cover) to make the big time and the way he is starting it looks like we haven’t seen nothing yet.
The list of local players isn’t a long one.
Back in the 70’s at least two local players made the pros.  Mel Gray (Montgomery) and Jerry Robinson (Cardinal Newman) were actually in the same NFL game.
Gray was a wide receiver for the St. Louis Cardinals and made All-Pro four times.  He was also pretty good in track and field.   In 1967 he broke a national record for the fastest 100 yard dash and did that in the State Meet.
Jerry Robinson was a three time consensus All-American at UCLA.   He was a first round draft choice for the Philadelphia Eagles in 1979.   He played six years for the Eagles and played in Super Bowl XV.  He finished his career with the Raiders.

Those two might be the local standard as far as a pro career goes.   In this era Koa Misi , who is a Montgomery graduate, is having a solid career with the Miami Dolphins.
In the college world at least, Scooby Wright has topped them all.
It is always a kick seeing local players doing well at the next level.   I was in the KSRO radio booth following Koa Misi when Montgomery went undefeated and won the NCS championship in 2004.
Who will be next? The clubhouse leader is Chris Taylor-Yamanoha, who has had offers from two majors programs and could get more.
Only time will tell.

THAT NAME AGAIN
As the developments Saturday went on in Cloverdale and you had the moment of John McMillan the grandfather presenting the grandson the Player of the Tournament trophy, with the father in attendance, I was thinking that maybe what was on display here were the biggest names in the history of local sports.
I know I might be a little bias.  We are picking up new readers all the time and I like to remind people that I graduated from Cloverdale High in 1974.  I wasn’t very athletic.  When I graduated I wasn’t very big either.   I was a hefty 5’ 4” and weighed a monster 95 pounds.   But I was still a sports fan and wanted to be part of the sports program.  I was the manager for the basketball team.  That is a glorified name for ball/towel boy.   The head coach was John McMillan.  There is a banner on the Cloverdale Gym wall with my name on it celebrating what was John’s first NCL I championship.

Coach McMillan established the Cloverdale Tournament, which will have its 50th anniversary next year.
Until the early 80’s it was all about Cloverdale.  The program became a regional story when Coach John and son Craig were part of the equivalent of three state championships.   The state championships were just starting then and only had three Divisions.   Cloverdale was in Division 3 and in the first of the three, they won a Nor Cal title which was as far as the tournament went.  The next two years it went to a state championship and Cloverdale won both of them.
In those three seasons, Cloverdale was ranked No.1 in the Press Democrat in the Large School rankings.  Yes, they were ranked higher than the Montgomerys and Cardinal Newmans of the world.
After graduation Craig went to Arizona, where they he had a final four appearance and a couple of years later John retired as coach.   The name went away for a couple of decades.  It reappeared when Craig became head coach of SRJC.   He has been there fourteen years.   He has been named the conference coach of the year five times and had exactly 300 wins going into the season.   No. 300 was the first ever mens basketball state championship in SRJC history.
Now here is Craig’s son.  Well actually there are two sons. Besides senior John, there is sophomore Jayson, who was the leading scorer in the championship game.
Oh and his nephew Travis Kitowski is also on the team.   Travis’ mother Sandy was part of two North Coast Section championships in the late 70’s.
It has been quite a legacy and the legacy continues.


TOURNAMENTS CONTINUE
Casa Grande and the SRJC Men take their  turn at the holiday tournament weekend.  Both tournaments start on Thursday.
Here are the first round schedules.

NINTH ANNUAL CASA GRANDE BRETT CALLAN MEMORIAL TOURNAMENT
3:30…Windsor vs. Petaluma
5 pm…Cardinal Newman vs. Fairfield
6:30…Washington (SF) vs. Miramonte
8 pm…Analy vs. Casa Grande
The second round starts at 3:30 on Friday.  The final day of action on Saturday starts at 3pm, with the championship game scheduled for Saturday at 6 pm.

KRIS KRINGLE INVITATIONAL AT SRJC
2 pm…American River vs. Redwoods
4 pm…Canyons vs.Marin
6 pm…Los Medanos vs.Shasta
8 pm…Feather River vs. SRJC
The second round starts at 2 pm Friday.   There are three games on Saturday which start at 4 pm with the championship game scheduled for 8 pm.
We will have more details about both tournaments coming.
If you have any information on your team let me know.
My email address is jacpasquini@comcast.net
cloverdale basketball,jery robinson,john mcmillan,scooby wright,ysn365.com
Share