THIS AND THAT: THE END OF THE BASKETBALL SEASON 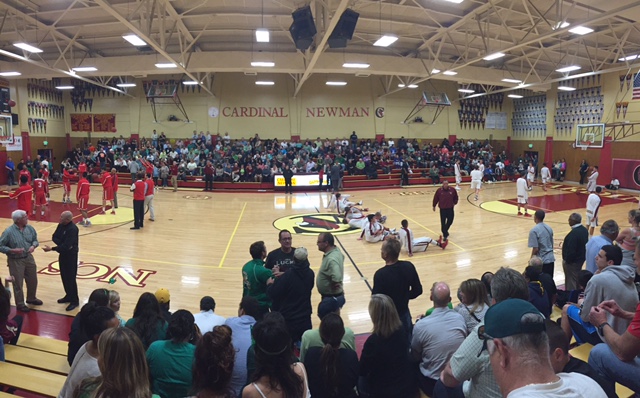 Tuesday Night didn’t work out very well for the Cardinal Newman basketball teams, and with that the area’s 2014-15 High School Basketball season ended.


For the fourth time in the playoffs, the Cardinal Newman Boys and Girls basketball teams were hosting a playoff doubleheader.  The first three times, the portion of the crowd rooting for the home team left very happy.  The fourth time it was just the opposite.
The Cardinal Newman Boy’s lost two playoff games.  Both were to teams they beat earlier this season.  On Tuesday, the season ended with a loss to St. Mary’s, a team they had beaten twice.  The last time was only two weeks ago in the North Coast Section playoffs game Cardinal Newman controlled most of the way before taking a 73-56 win.
In the game on Tuesday, St. Mary’s took a 61-43 win.  St. Mary’s led most of the way and scored the last ten points of the game to make the score look a little more one sided than the game actually was.
Cardinal Newman ends the season with a sparkling 30-4 record.  It is the second time in three years they hit the thirty win mark.
The Cardinal Newman Girls loss might have all the area’s programs wondering what it will take to win a Section or State Championship.  There is no question that when listing some of the best teams in local history, the Cardinal Newman Girls would be on that list.  They dominated as much as a team can dominate.  The only team recently that comes close, is the Casa Grande Girls three years ago.  They went 30-3 and their season ended about the same way as Cardinal Newman’s did.

Cardinal Newman finished 26-7, with all but two of the wins by over 20 points.  The two that weren’t, were by 19.  They lost the seven games by a combined 41 points.  They had 11 games in which they won games by more than that.  In the playoffs, they lost two games by a combined six points.
The season ending 54-50 loss to Brookside Christian was a tight game all the way.  The biggest spread was six.  Adding to the frustration was the big difference at the foul line.  Brookside Christian shot 23 free throws, compared to five for Cardinal Newman.
So the beat goes on.  Since 2005 there has been 114 North Coast Section Champions.  Local teams have won six.  Two of them were by the Montgomery Boys in 2006 and 2011.  Three other were Division 6 schools, one boy and two girls.  The other was the Analy Boys in 2009.
I have said before it takes a special group for a local team to take a section or state title.  After what happened to the 2015 Cardinal Newman Girls, who were a special team, maybe I should say it takes a special, special, special team.
Having said all those not so got stats about the playoffs, it’s not a big deal.  The lack of playoff success doesn’t take away from six months of good action.  Coming soon I will have my top five moments of the high school basketball season.
FANS IN THE STANDS
When covering a high school basketball game, I sit in the crowd and get the feel of things from them.  During the playoffs, I like sitting with the crowd that is from out of the area.  It usually is a different feeling and really a different attitude all together.
On Saturday Night at Montgomery, I sat by the Cosumnes Oaks fan base.  They put on a show and I did learn local fans aren’t the only ones who complain about calls.  There was one guy in particular who didn’t agree with one call that went against Cosumnes Oaks.  His voice stood out and it stood out big time.
He made sure to point out late in the first half, that the fouls were 7-2 against Cosumnes Oaks.  He continued to complain as the foul rate reversed to 6-2 against Montgomery in the second half.  Even with the change in foul calls, he still wasn’t happy.  He thought that every foul called called against Montgomery, should have been called against Eric Poulsen.
He was okay about the technical called in the last half minute that basically decided the game.  Actually he was okay with the final result.  I am sure he left thinking it was the best officiated game of all time.
By the way, besides the technical, I thought it was a well officiated game throughout.
PLAY BALL
The baseball and softball season has begun and we get our first taste of league play this week in the NBL.  Maria Carrillo, who went undefeated in winning the North Bay League last season, won its league opener against Santa Rosa on Wednesday.  Most of the league play doesn’t really kick in until early April.
Next week is spring break for the Santa Rosa schools. Spring break and high school baseball means the Al Rabinovitz Tournament, which is hosted by Montgomery.  This is the 21st annual event that has eight teams that play three games.
Each team plays two games on Tuesday at four different venues and then one on Wednesday.
The defending champion is Petaluma.
AL RABINOVITZ TOURNAMENT
TUESDAY MARCH 24TH
11 AM
Analy at Montgomery
Ukiah at Piner
Northgate vs. Windsor at SRJC
Chico vs. Petaluma at Doyle Park
2:30
Loser Game 1 and 2 at Piner
Loser Game 3 and 4 at Doyle
Winner Game 1 and 2 at Montgomery
Winner Game 3 and 4 at SRJC
WEDNESDAY MARCH 25TH
10 am…7th place game at Doyle Park
10 am…Consolation at Montgomery
1 pm…3rd place at Montgomery
4 pm…Championship Game at Montgomery
ONE TOURNAMENT NOT BEING PLAYED
Remember when life was simple and the Spring Break was called Easter Break and every school had the same break.  Well that isn’t the case and schools have a roving spring break and that is one of the reasons that the annual Adam Westcott Memorial Tournament, which has been hosted by Casa Grande for nearly two decades will not be played.
The tournament was named after Adam Westcott, who went to Casa Grande and played baseball before he was killed in a car accident at the age of 17.  Casa Grande Head Baseball Coach Paul Maytorena says he regrets that it has come to this, but he does remember how special Adam was on and off the field.  He says the school will be offering an annual scholarship in Adam’s name.
NEW SPORTS, NEW FANS
We need all the help reporting scores.  If you want to be one of our reporters with game updates or any other news you might want to send our way, email me and I will get back to you on how you can help out.
My email address is jacpasquini@comcast.net
You can also now follow me at twitter @homer2612
Share