THIS AND THAT: THERE IS MORE THAN FOOTBALL 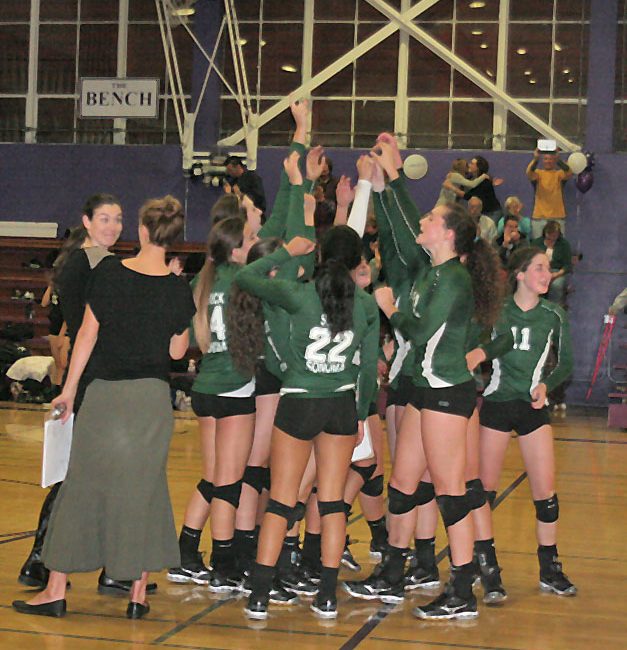 If you read these articles on YSN365.com you would think that football is the only sport going on.
Obviously that isn’t that case.
During the fall, besides football, we have Cross Country, Golf, Soccer, Tennis and Volleyball in motion.
Volleyball had an epic match last week.   Well maybe not epic, but it was pretty good.  Maria Carrillo, who has set the standard in this area the last few seasons, met Sonoma Valley who hasn’t been too bad themselves.
After losing the first two games 31-29, 26-24, Sonoma Valley rallied for a 3-2 win.   The fifth game final was 15-13.
Next up, Sonoma Valley hosted Vintage and dropped the match 3-1.  That match, as they like to say in sports, was closer than the score indicates.   Three of the four games were decided by two points.
If the first two matches are any indication, have some Alka Seltzer handy when watching Sonoma Valley Volleyball.  In the first two matches there have been nine games and six of them have been decided by two points and five of those going extra play.  A game goes to 25, but a team has to win by two, so it could go on forever.  That is true except for the fifth game, which decides the match.  That goes to 15 in a game that you also have to win by two.  That is the reason for the 15-13 score in the final set against Maria Carrillo.
Sonoma Valley is hosting the annual Greg Paganini Invitational Tournament this Saturday.  The tournament benefits the Greg Paganini Scholarship Fund and has a 16-team field which includes Maria Carrillo.
League play begins next week.
Vintage is a pretty good program themselves.   Over the last two seasons Vintage is 56-7.  Last season they lost the San Joaquin Division 1 section championship game.  They followed up the win over Sonoma Valley with a 3-2 win over Maria Carrillo on Tuesday Night.
SMALL SCHOOL NUMBERS
Last week, Tomales suited up sixteen players and while that is low even for a small school team, it is what you have to deal with in the Small School World.  I was at Saturday’s Cloverdale-St. Vincent game and the two teams combined had 45 players dressed for the game.  In comparison, going by the Max Prep rosters and not counting Ukiah who has 74 players listed (can they have that many?), the average roster is forty.
It is hard to say how accurate the MaxPrep rosters are, but in the NCL I, three of the six teams who have the a roster posted have under thirty players.  The NCL II, who has even smaller schools then the NCL I, has four teams and three of the teams have under twenty listed as a roster.
STRANGE GAME
The Cloverdale-St. Vincent JV game had two different games for the price of one.   Well each game went two quarters, the first a wild scoring affair, the second a defensive standstill.
After a first half of big plays the two teams were in a 20-20 tie at the half.
I would have like to have seen the defensive adjustments made at the half because they were brilliant.  The only score of the second half came after a St. Vincent punt was downed inside the Cloverdale one yard line.  On the next play, the St. Vincent defense tackled Cloverdale in end zone for a safety.
Final score:  St. Vincent 22 Cloverdale 20
JC FOOTBALL TAKES ON DEFENDING CHAMPS

The SRJC Football season had an opener that was similar to the 49er win over Dallas.  That is a big first quarter which was the difference in a 31-21 win over San Joaquin Delta.  Christian McAlvain, who is a Windsor graduate, ran for one touchdown and threw for two more in the first twelve minutes of the game to give them a 21-0 lead.
The Bear Cubs, who were ranked No. 18 in the Pre-Season State Rankings and moved up to No. 12 after the opening week win, opens its home schedule this Saturday against No. 1 and defending state champion Butte.  Kickoff is at 5 pm.
Butte started the season just the opposite of SRJC and the 49ers.  They feel behind No. 13 Chabot 14-0 in the first quarter and then rallied for a 34-21 win.   They scored 20 points in the second quarter to take the lead for good.
On its way to winning the state championship last year Butte won all twelve of its games.   One of them was a road win over SRJC 49-21.   Butte and SRJC were in the same conference last season. This year they are not.
This is the first of five home games for SRJC.  All of them are on Saturday at 5 pm.
SRJC is also in a different conference this season.  Last season they were in the Nor Cal-North.  This year they are in the Bay 6.   The only change team wise is Diablo Valley takes the place of Butte.
FINALLY FOUND IT
One of the more entertaining looking scores of the weekend was the 46-24 Tomales win over Elsie Allen.  I had seen a running score of that game and it seemed like a good game.  The only scoring I saw on Friday night was a 96 yard touchdown run by Willy Lepori.   So I was wondering what his numbers ended up being.
Lepori rushed for 224 yard game and scored four touchdowns.   In two games, Lepori has gained 438 yards and scored seven touchdowns.  Obviously player of the week material, which is a good time to remind everyone, if you have a nominee for the player of the week, email me.  My e-mail is at the bottom of every article.
Tomales led that game 32-24 in a wild first half.   They had the only scoring in the second half, with two third quarter touchdowns.
WORKING PART TIME
They have played the first half of each game but Analy has some real offensive numbers.
Quarterback Will Smith is 34 of 47 for 411 yards and six touchdowns.

Running back JaNarrick James has carried the ball 24 times for 291 yards and five touchdowns.   That is a rushing average of over 12 yards per carry.
Seventy four of the ninety five points Analy has scored have come in the first half.
All twenty one points they have given up came in third quarter.
The Tigers have this week off before traveling to Montgomery on September 19th.
JUST NOTING
Casa Grande is a rare 0-2, with both losses not close.  They are still the only team that posts their stats at Max Preps.
My email address is jacpasquini@comcast.net