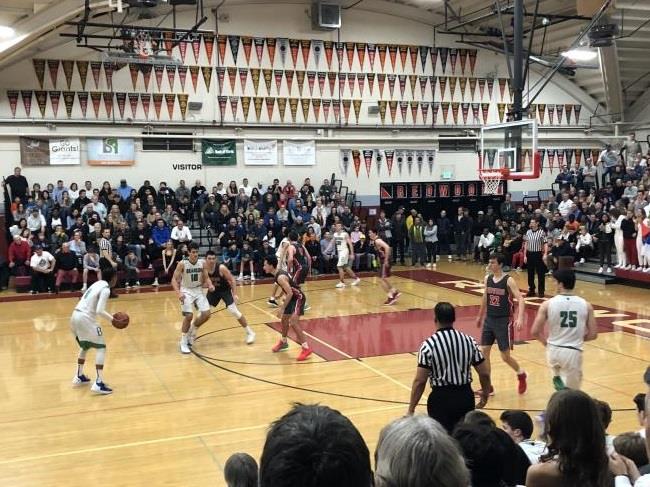 LARKSPUR – Peyton Mullarkey’s three pointer with 17.8 seconds left put Branson up by two points, just the third time they had led all game, and then he hit a pair of free throws to seal the Marin County Athletic League tournament championship for the Bulls, 41-40 over Redwood.

“It was crazy man. Vic (Rajkovic) had been scoring all game and I was left open and it went down,” said Mullarkey on his late three-pointer.

“He’s nails. He hit that huge three and then sunk two at the line. He still believed and he took advantage of his opportunity,” said Branson coach Jonas Honick.

The two teams played in front of a capacity crowd at Redwood High School’s large gym.

“They got lucky, it was a home game for them, but the atmosphere was amazing. It was awesome,” Mullarkey added.

The two teams traded buckets to begin the game, and stayed within one point of each other for most of the first quarter. With Redwood leading 10-9, they would finish on a 10-2 run, getting buckets from Chance Farrell Martin, Matt Shippey, and five points from Jake Matthews. Redwood led 20-11 after one. Branson (26-2, 16-0) only got two defensive stops in the first quarter.

“We knew they were gonna come out guns blazing. They came out with energy. They’re a very good team, and they hit some tough shots,” Honick said.

Kwentyn Wiggins kept the Bulls afloat, grabbing offensive rebounds and slowing the pace of the game down. Redwood (21-7, 13-3) added six more points to its lead in the second quarter, with Matthews hitting a runner to push it up to a 15-point lead as Branson called a time out.

Wiggins then hit an and-one right out of the time out to switch momentum. Rajkovic hit another pair of shots to bring it within eight, but Martin closed the half with a beautiful move to the basket as the Giants led 28-18 at the half.

Branson’s defense was then taken to another level, with the help of Aidan Demian.

“He defended really well. It brought energy to the rest of our team and they fed off it. It led to us getting stops and chipping away. We wanted to get it within 4-6 points,” Honick said.

They got it closer than that, as Wiggins scored to open the quarter, but Rajkovic began to attack the rim and got to the free throw line for six foul shots, and sunk all six. Miles Keefe added in a long range shot of his own. Branson held off several Redwood shot attempts as they cut the deficit to 30-28 Redwood at the end of three.

Will Jacobsen’s first points of the game were big, with 5:40 to go, as his lay-up went in, and was fouled as the Branson faithful erupted, giving the Bulls their first lead of the game. He would then score again with a nice move in the lane to give them a three-point lead.

Martin connected on a big three for Redwood to tie the game back up. From there on, the lead would go back and forth five times. Wiggins hit one of two free throws to put Branson up, 34-33. Then Martin hit a bucket, and was fouled but missed the free throw as it remained 35-34 Redwood. Rajkovic hit two more free throws making him 8 for 8 on the night, and Branson led, 36-35. Martin then was fouled and hit both as it then went back to Redwood leading 37-36, which set the stage for Mullarkey’s big finish.

Branson will most likely be a number-one seed in the NCS Division 4 playoffs, which is announced on Sunday.

Redwood is expected to be a top 5 seed in the NCS Division 2 playoffs.