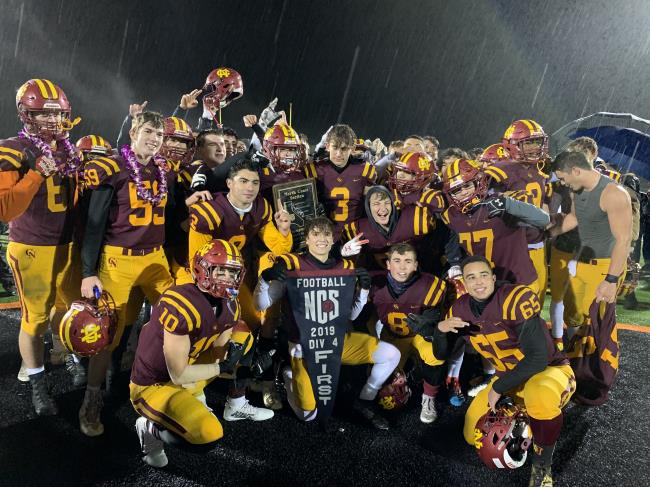 SANTA ROSA, Calif – Cardinal Newman head coach Paul Cronin really wanted this one. He was 0-3 against Marin Catholic in his coaching career at Newman, but now he can replace that zero, as his Cardinals took down Marin Catholic in the North Coast Section Division 4 Championship game, 13-10.

A very rainy, cold, and wet night saw a smaller crowd than expected, but still reasonable and active all night.

“I’m pretty excited for these kids and their families. We didn’t get to play in this game last year and it was hard on us,” Cronin said.

Quarterback Jackson Pavitt set up a chance for Newman to win the game by finding Justin Lafranchi on fourth-and-13 with 11 seconds remaining for a first down.

“We had a different play called out of the huddle, but they changed coverages so we pieced a play together in time for Justin to make a great catch,” said Cronin.

“We knew we needed a field goal. The safeties were deep trying to prevent the touchdown and I took an extra second to look at the backers over the middle, and saw the opening with LaFranchi in the slot,” Pavitt added.

That set up Ethan Kollenborn’s 36 yard field goal as time expired which gave Newman it’s first section title since 2016, and avaneged their 59-56 loss to Marin Catholic in the 2017 NCS Championship.

Cardinal Newman got going after a few punts on both sides of the ball led by Pavitt. He threw a nice deep pass to Giancarlo Woods 43 yards to get them down to the one, where Pavitt would take it himself on a sneak to give his team a 7-0 edge.

The Cardinals were inside the 20 with a chance to extend their lead to 10, but on a night where weather conditions weren’t ideal, Kollenborn didn’t kick this one accurately and Newman’s lead remained at seven with just under nine minutes to play in the half.

Pavitt then led a methodical drive down the field nearing the end of the half. He completed four straight short passes to Woods to set up Kollenborn, who would nail the 46 yard field goal heading into the half with Newman up 10-0.

Marin Catholic would not go quietly. After punting away their first drive of the second half, they got the ball right back as Spencer Lauer picked off Pavitt, the first he’s thrown all year.

A bad snap turned into gold for the Wildcats as Gaven Cooke took a low snap that was nearly on the wet artificial turf and turned it into a 40 yard pickup that got them inside the 20. A few plays later, they’d settle for a 26 yard field goal from Javier Martinez to get them on the board with four minutes remaining in the third.

After a Cardinal Newman punt, Cooke was leading the Wildcat charge again, as a 48 yard run at the end of the quarter set them up for a chance to tie the game.

On the first play of the fourth quarter, Matteo Perez was stopped initially at the five yard line, but a second effort from him and his offensive line eventually pushed him into the end zone for Marin Catholic to tie the game at 10 on his nine-yard run.

“They started going into a double tight set, which eliminated some of our blitzes off the edge. We had to take chances up the middle, and they were able to get some big plays off of that,” said Cronin

On Cardinal Newman’s first play on the ensuing drive, Pavitt fumbled in the pocket and Marin Catholic had gotten the ball right back.

The Wildcats got into field goal range, but this time Martinez’s 37 yard kick was wide and no good with just under ten minutes to play.

A Cardinal Newman punt with 5:56 to play put Marin Catholic down at their own seven yard line.

With two minutes to play, Tsion Nunnally picked off Michael Ingrassia to set up the Cardinals classic finish.

“It was like being in the ring. We knew they were bigger and we had to play extremely tough to survive a game like tonight,” Cronin commented.

Cardinal Newman wins their sixth NCS championship under Cronin, and their 13th overall. They will await to see who they will battle in a CIF NorCal Bowl Game.

“I know what this means to Coach Cronin and he knows how much it means to me. We’ve been working so hard for such a long time,” Pavitt said. “After the game when I was a sophomore, tt haunted me because as a safety, I realized I was nowhere near the player I needed to be for that team. I felt that I was the weak link and have been trying to prove myself ever since.”

Marin Catholic loses in the NCS Championship game for the second straight season. Last year they fell to Bishop O’Dowd 16-15, giving the Wildcats two losses by a combined four points in the past two championships.