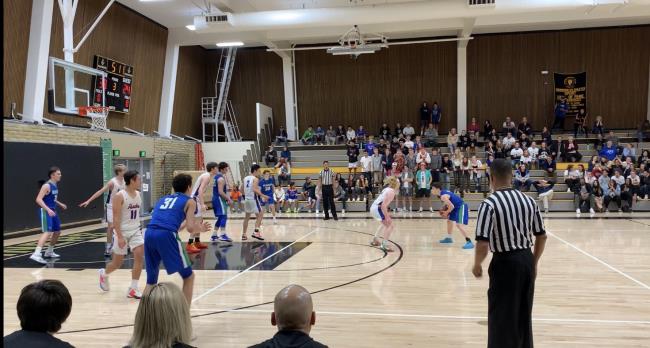 KENTFIELD, Calif. – It was a show of two players from Branson that stole the spotlight in Branson’s 57-42 win over Tamalpais at College of Marin on Thursday night.

Peyton Mullarkey and Lukas Prongos combined for 43 points en route to help Branson improve to 12-1 on the season and 3-0 in MCAL play.

“This is their time. They have worked extremely hard to get to this point. They had to defer to other guys of the past, now we are counting on them to lead us,” said Branson head coach Jonas Honick.

“We played five really intense games in a row over in the East Bay, so it proved really good preparation for our guys for the MCAL,” Honick added.

Mullarkey started the game on fire for the Bulls. He scored their first eight points, with the aid of a couple of three’s. His hot shooting allowed him to then become explosive off the dribble to get inside for a few lay ups.

“MCAL basketball is a lot different from when we played in the East Bay. Everyone is quicker, more athletic. The best team we have played so far, Weston Ranch-Stockton, we ended up squeaking it out but it gave us confidence because you realize, that they’re a good team, and if we beat them, we can beat anyone in MCAL,” Mullarkey said.

Tamalpais (9-5, 3-1) was not going to go down easy. Brothers Tyler and Dylan Reed provided flashes of nice play, but with Mullarkey scoring 14 points in the opening period himself, it paved the way for an 18-7 Branson lead after one.

The scoring would be much more spread out in the second quarter. Miles Keefe and Andrew Parrot were able to score buckets for the Bulls. Tyler Reed was single handedly willing the Hawks back into the game with his tough play. He scored Tamalpais’ first seven points in the quarter, hoping he would be able to light a spark. Mullarkey would respond with a pair of buckets, and then near the end of the quarter, Lukas Prongos had back to back buckets to quietly extend Branson’s lead to 33-19 at the half.

“Playing in the East Bay is like a pick up game, which is good because it’ll teach us here in the MCAL that we can still be loose, and not so robotic,” Prongos said.

The third quarter began with some sloppy play. On each team’s first three possessions, they turned the ball over to one another. When Tyler Reed was able to finally get a shot up, he made them. He made a floater from the free throw line and a three to cut it to a nine point deficit. But, Mullarkey was there to extinguish that fire with a three, and Prongos followed it up with back to back buckets to go back ahead 41-24.

Devin Mims scored off a Branson turnover, but Prongos and Jack Jacobsen got those back and then some, scoring in the final minute to take a 46-26 lead into the final stanza.

“There’s no give up in Tam. They’ll always be fighting,” Honick said to his players in one of his timeout huddles.

He was right. Dylan Reed was the leader of that scoring the first four points of the quarter, and still playing tough defense. Tyler Reed added a bucket and free throw, again trying to light a spark with an emotional reaction. Prongos made that all for not with a pair of three’s. Both Reed brothers and Connor Jenkins rounded out the scoring for Tamalapis, while Keefe and Jake Beere did the same for Branson.

“There are going to be plateau’s through the course of the year, we just want to make sure the plateau lasts for a long period of time. If we become complacent, it is very easy to lose 2-3 games in a row in this league,” said Honick.

“Every MCAL team can beat us, no matter who we are. We have to game plan for every team and make sure we don’t let that happen,” said Mullarkey

“Every team is going to play their best against us, we can’t take one night off,” Prongos said.

Prongos had 22 points for Branson, with Mullarkey adding 21. Tyler Reed led all scorers with 23 for Tamalpais.