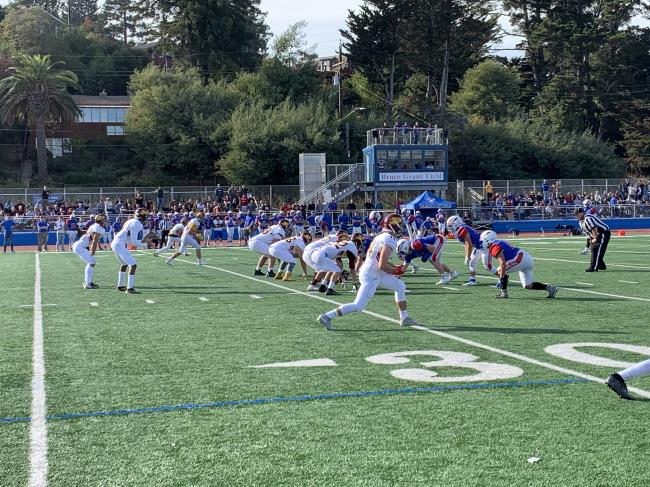 MILL VALLEY, Calif – Piner-Santa Rosa earned the program’s first playoff victory since 2013 as they defeated Tamalpais-Mill Valley 41-36 in a shootout on Saturday afternoon.

Piner only scored in two quarters, but still scored 41 points. The game was pretty much decided when Piner converted a third-and-six on a pass from QB Yonaton Iaack to Jake Herman for 19 yards with 1:17 to go, but threw the ball twice to stop the clock that gave Tamalpais one last shot, but was no good.

“The team responded well after last week. When we play with confidence we can score at will, there’s no doubt about that,” said a happy Piner head coach Terence Bell. “It feels amazing to win in the playoffs.”

Piner got going early when Isack found Michael Collins through the air for a 17-yard touchdown to put them up 7-0 early. On the Prospectors’ ensuing defensive possession, a muffed punt by Tamalpais was picked up by Adonis Gutierrez and returned 20 yards for a touchdown and Piner had opened up a 14-0 lead.

Piner got the ball right back, but a great punt by Tamalpais put them at their own 10-yard line. This allowed Joe Lubenow to sack Isack and force a safety. That’s how Tamalpais got on the board.

Piner recovered the onside kick after the safety, however, and turned that into another touchdown, as Isack found Adrian Torres on a 37-yard screen play to open up a 21-2 lead in the first quarter.

“Yonaton (Isack) does a good job of taking what the defense gives him. He’s done it all year,” commented Bell.

Tamalpais wouldn’t go down easily. QB Aidan Newell found Ben Reade over the middle for a 35-yard touchdown pass to bring the Hawks to within 12 at the start of the second quarter.

Both offenses would be stalemate from there. Piner stopped Tamalpais from scoring again with four minutes to go in the half, as Torres stopped Newell shy of the goal line and a 21-9 score remained heading into the half.

Jack Ehlermann got Tamalpais going in the third quarter, on just the second play from scrimmage he ran 32 yards to cut the deficit to 21-16. Torres was at it again for Piner, as he got a key block from his brother Issac, and took the ensuing kickoff 83 yards to the house as Piner got those points right back.

On Tamalpais’ next drive, Newell was almost in the throwing motion before the ball was knocked out and then picked up by Sumail Berhe, who took it 33 yards for a Piner defensive touchdown. That opened up a 35-16 Piner lead, with 21 points scored in 1:07 on the game clock.

The Hawks would respond again, as Newell connected with Samuel Reade for a 14 yard touchdown pass to bring them to within 35-23. With just 22 seconds to go in the third, Isack threw his third touchdown pass of the game to Herman for 30 yards, and what would be Piner’s last points of the day.

Tamalpais tried to make a furious comeback. They scored with 7:26 to go on a 24 yard pass from Newell to Luke Marshall to make it just a 12 point game. After the Hawks defense forced a Piner punt, Crewe Hutson scored on a six yard run which cut the deficit to 41-36, but time ran out on their season.

“I feel like Santa Rosa did us a favor last week. That gave us experience in a close game and it helped us today,” Bell said

Piner improves to 10-1 on the season, and travels to North Bay goliath Cardinal Newman next Friday.

“We are excited to play Newman. We want to play the best, and be on the field with the best so it will be awesome,” said Bell

Tamalpais’ season ends, with a 7-4 record.