The first game these teams played this season settled everyone’s nerves in the aftermath of the Tubbs fire. The second game settled the North Bay League championship. The third was supposed to settle, once and for all, who fielded the best high school football team in Sonoma County in 2017.

The final score in Friday night’s North Coast Section Division 3 semifinal at Santa Rosa Junior College was Cardinal Newman 29, Rancho Cotate 28. But the result did little to convince the Cougars that they are No. 2.

Read the rest of the story here 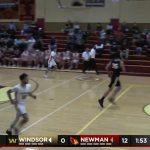 Post game "Player of the Game" Windsor vs Newman Baasketball