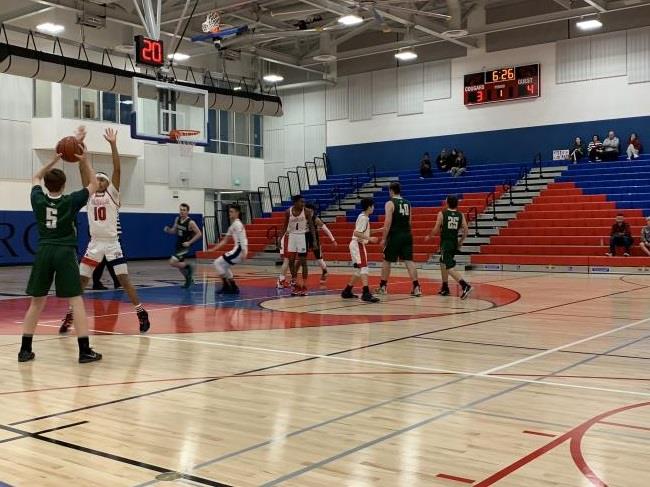 It was a game of long scoring stretches for both teams, with Sonoma Academy able to have the last one. The Coyotes outscored Rancho Cotate 17-9 in the final quarter, after coming into the quarter down seven.

“It was a great game. Both teams played extremely hard. We stayed together,” said Sonoma Academy head coach Luc Martin.

A 14-2 run in the fourth quarter, all scored on two point buckets, was the decisive stretch for Sonoma Academy to get back in the game. Iain Wade scored eight of those points, using his size to grab offensive rebounds and score. Eli Bayer contributed four points in that rally, with Sebastian Gonzalez adding the other two. The run had brought the score to 53-52 in favor of Rancho Cotate.

Malik Roby and Bayer each split free throws for Rancho and Sonoma Academy respectively, setting up Archie Lee’s mid range jumper with 4.2 seconds left to put Sonoma Academy ahead for the first time since they had led 8-5 early in the first quarter. Ryan Hoxsie’s hail mary shot was no good at the buzzer for Rancho Cotate, although it was darn close.

A quick pace began the night on both sides. Wade got Sonoma Academy going with two quick buckets, Andrew Pengel got Rancho Cotate on the board with a three. Pengel would hit another three to put Rancho up 12-8, causing Martin to call his first timeout.

The teams essentially traded points after that, but at the end of the period, Eli Bayer hit about a 30 foot shot off the backboard to end the quarter, with Rancho Cotate holding an 18-16 lead.

“We knew it was gonna be a fast paced game, so we thought our conditioning and good defense was gonna help us, and I definitely thought it did in the end there.” Martin said

Rancho Cotate started the second quarter on a 10-0 run, causing Martin to call another timeout. The Coyotes would not score again until there was 3:59 to go in the half. Sai Vadrawale would get a steal and a lay in, but Sonoma Academy would close out the quarter with a 7-0 run of their own.

Gonzalez was able to get in the paint for a bucket, as did Wade. With less than a second on the clock, Gonzalez chucked one up from about 50 feet, and got it to go, to bring the score to 30-25 Rancho Cotate at the half. It was the second straight quarter with a buzzer beater for the Coyotes.

A 12-2 run began the third quarter in favor of Rancho Cotate. Darius Hurst would score his only two points of the night to start it. Pengel would score a lay up, then a three, and Nate Fredlund got two points on a putback. After Sonoma Academy’s Peyton Stroud scored, Pengel would put the cap on the run with another three.

The Coyotes came right back with another run of their own. Wade would start it and end it with two points inside the key. In between those, it was Bayer dropping in a three, and Jake Sherley getting a point from the Free throw line, making it 42-36 Rancho Cotate. Hoxsie hit a three for the Cougars, while Bayer scored for SA closing out the quarter, with Rancho still ahead 45-38.

Wade would have 20 points with Bayer adding 19 points for Sonoma Academy. Pengel finished with 18 points for Rancho Cotate, with Roby scoring 11 points.

Sonoma Academy will begin league play in the NCL IV, hosting Credo on Tuesday night for a 7:30 tip.

Rancho Cotate heads back into NBL-Redwood play, travelling to Healdsburg. Both teams are 2-0 in league play. The two split the season series last year.

“I have a ton of respect for Mike (Washington-Head coach for Rancho Cotate) and Rancho Cotate. We don’t really look at what divisions are opponents are, they’re just another team to us,” said Martin. “We only lost by one to Santa Rosa. We just want to be us and play Sonoma Academy basketball. This is a good group here.”