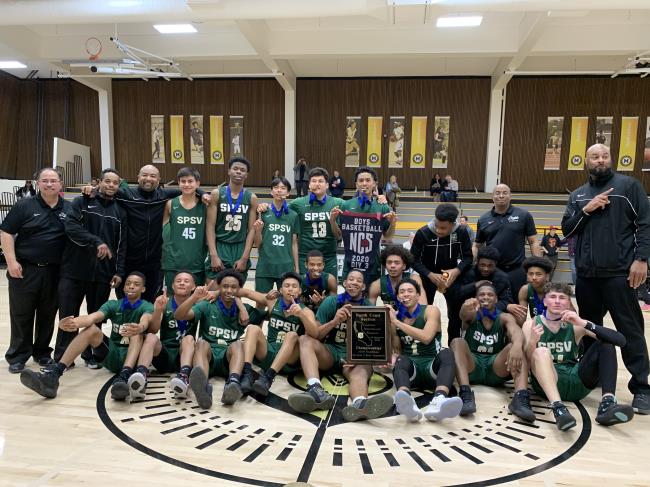 KENTFIELD, Calif – When Jonas Honick took back over the Branson program before the 2016-2017 season, it began a string of three straight years of NCS championships. They went for four in a row on Saturday night, but fell short to number two seed St Patrick-St Vincent of Vallejo, 43-40 in overtime, in a game played at College of Marin.

It was Dishon Jackson and Jalen Scott each going one-of-two from the foul line that eventually gave the Bruins a three-point lead with 1.7 seconds to play, and Mile Keefe’s shot from the other free throw line fell short, and so did the Bulls’ dreams of a fourth straight NCS championship.

“The free throw felt good, felt like I had iced the game for us,” Jackson said postgame.

“That was a legit championship game right there. Game goes to overtime, they tie it up with a three late, could not have any more drama involved,” said SPSV head coach Derek Walker.

It was a back and forth battle to start, just as you’d want a championship game to be. Keefe got things going early with a lay up off the glass, but the Bulls then left Esai Contreras wide open on the right wing as he nailed a three to put St Patrick-St Vincent in the lead. Connor Maas and Peyton Mullarkey would each hit shots, with Mullarkey’s being a three to give the Bulls a 7-6 advantage.

Keefe once again started the scoring in the quarter for the Bulls, and the teams traded blows. Trailing 18-17, St Patrick-St Vincent ended the half on an 8-0 run. It started with Wilfred Nado hitting a three, and then Jackon pumping some muscle inside for an old fashioned three point play, and finally it was Jaden Alexander finishing it off for a 25-18 halftime lead for the Bruins.

One thing you know if you live in the North Bay and have followed Branson over the past few years is that Honick is very good at halftime adjustments.

The teams traded buckets in a rather low scoring third quarter, as stifling defense was played on both sides. With St Pat’s leading by seven, the Bulls hit three consecutive three’s to take a two-point lead. Mullarkey, who was in foul trouble hit the first one, then sophomore Jake Beere hit two in a row from the corner to turn the Branson faithful into a frenzy as the Bulls had taken the lead back.

Jackson went back to the other end after chants of “overrated” echoed from the Branson student section to complete an old fashioned three-point play to put the Bruins up 31-30 heading into the fourth quarter.

The Bruins extended their lead to three with Scott started it off hitting a shot from the elbow, but Nikki Prongos hit two straight layups in transition to give Branson a one-point lead. After that, the scoring was stalemate for about three and a half minutes.

Jackson scored to give the Bruins back the lead. With just 35 seconds left, Lukas Prongos was called for three in the key. Branson fouled, got Scott to miss at the line, but as they were bringing the ball up the court, a bad exchange gave the ball to Contreras for SPSV, and he scored as he was fouled to put them up 37-34. After a miss at the free throw line, Keefe brought it up for Branson, and with the defense collapsing, gave the ball up to Lukas Prongos in the corner who hit the game tying three with just under 10 seconds remaining. The Bulls stood strong on their last defensive possession as the game went into overtime.

“The guys did a really good job fighting to force overtime. A very nice shot by Lukas,” Honick said.

Jackson started the scoring in overtime with a layup, and another two-minute stalemate from scoring occurred. Jackson himself ended that with a thunderous dunk, but was called for a technical foul for hanging on the rim, which gave Lukas Prongos two free throws, in which he made one of them.

“We were up four, so we were still in a pretty good position. We couldn’t go back and change anything, we had to stay the course.”

Keefe then scored for Branson to make it a 41-40 game. Both teams had their opportunities, and then Scott was fouled for SPSV with 13.9 seconds remaining. He hit one of two from the line which gave Branson one more shot. With Mullarkey out of the game due to fouling out, they gave the ball to Keefe who was unsuccessful in scoring in the paint, giving the ball back to the Bruins.

“Miles went to the basket a few times tonight and for some reason could not buy a call but to the officials credit, they let the guys determine the game because there was contact on the other end too,” said Honick

St Patrick-St Vincent now wins its second NCS championship in three years. They move to 22-10, and await their seeding in the CIF Norcal brackets.

“This one feels good, like I’m going out with a bang, but we still got work to do,” said Jackson.

“This team competes, with our talent, they way they listen, we can compete with anyone,” said Walker

Branson falls to 29-3, but will have another chance for their third straight 30-win season when they find out their seeding in the NorCal brackets.

“Tonight’s game was gravy for a lot of guys to get to this final,” commented Honick. “The whole coaching staff is proud of them, and there’s still more to come in Norcal. We got to the D1 finals last year, and hopefully we can find a little magic and get back to a final again.”

“Branson is the real deal. I see why they’re 90-10 over the past three years. They have a coach who’s super high level, a great defensive team. I have nothing but the utmost respect for that team. Great kids and a great program,” Walker commented.