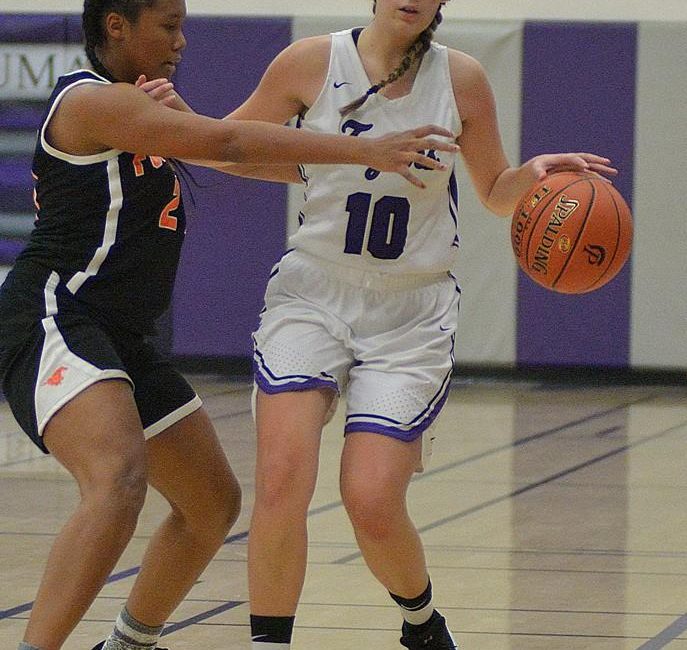 It was an exciting day from the Petaluma Trojan Classic, as three of the four games were decided by nine points or less, including an overtime game. Here’s the breakdown.

St Vincent de Paul-Petaluma rolled past Foothill, 67-43, in the opener for the day’s action. St Vincent built a 36-18 halftime lead and a 50-32 lead after three. Foothill scored the first seven points of the fourth quarter to cut the St Vincent lead to 11, but the Mustangs held it off, only allowing four more Foothill points the rest of the quarter. Alessandra Ditizio led St Vincent scorers with a tournament high 31 points, with Alexandra Saisi scoring 18 points. Ashantay Taylor scored 25 points for Foothill.

In game two, the first boys’ game of the day, Capuchino came out hot, building a 10-point lead after one over Elsie Allen, but the Lobos’ hot shooting kept them in the game, and after three, they had cut their deficit to just two. A hard fought fourth quarter, and more hot shooting, tied the game at 47 at the end of regulation. Elsie Allen edged out a 6-3 overtime period, with clinching free throws from D’Angelo Leon to win 53-50. David Roldan led scorers with 20 points, with Leon adding 13. Anthony Contreras had 12 points for Capuchino.

A 15-point run to start the fourth quarter carried the Petaluma girls to a 39-28 win over Santa Rosa, in a game which had been tied at nine points each after one half of play.

Flashbacks to the boys’ 2016 SCL Championship game were mentioned among the Trojan faithful, a game in which Petaluma defeated Analy, 27-26.

But first, it was Santa Rosa which turned on its jets to build a 22-16 lead after three quarters. Petaluma then went on its 15-0 run to suddenly go up 31-22 in the fourth. Petaluma’s best player, Sheriene Arikat, fouled out, which meant that Taylor Iacopi began to step up, banking home a three, and the scrappy play of Rose Nevin grabbing several rebounds and put backs to build a 13-point lead late in the game, eventually ending in the 39-28 Petaluma win.

Nevin had 12 points for Petaluma, with Iacopi adding 8.

Trailing by 10 points after three quarters, Rancho Cotate went on a 14-point run to take control, eventually posting a 57-51 win over host Petaluma.

Both teams traded blows early, before Petaluma built a 31-19 halftime lead. Esteban Bermudez hit a three to start the third to build a 15-point lead. Rancho Cotate chipped away to pull within 10 at 45-35 Trojans after three.

Beginning with 6:29 to go, Rancho Cotate went on a 14-0 run. It started with a Darius Hurt four-point play, then Issac Candelaria hit a three, followed by Andrew Pengel hitting a floater, then Candelaria doing the same, and finally Hurst hitting a three, and with 3:29 to go, Rancho Cotate had taken a 49-45 lead, with Petaluma yet to score. The Trojans finally did, after an and-one by Bermudez, Liam Gottschall scored on the rebound to tie the game back up. After the teams shot some free throws, Andrew Pengel hit a three to put the Cougars up 54-50. Bermudez hit one of two from the line to trail 54-51.

Rancho Cotate took the clock down to 9.5 left, and after a timeout got the ball to Pengel, who was fouled shooting a three two seconds later. He hit all three to seal the Cougar 57-51 win over the hosts. Pengel led all scorers with 23 points, with Candelaria adding 11. Bermudez had 18 points for Petaluma.

Rancho Cotate could win the boys championship with a win Monday, as can Petaluma with the girls side. Should either of those teams fall, final standings will be decided via tiebreakers head to head and point differential.