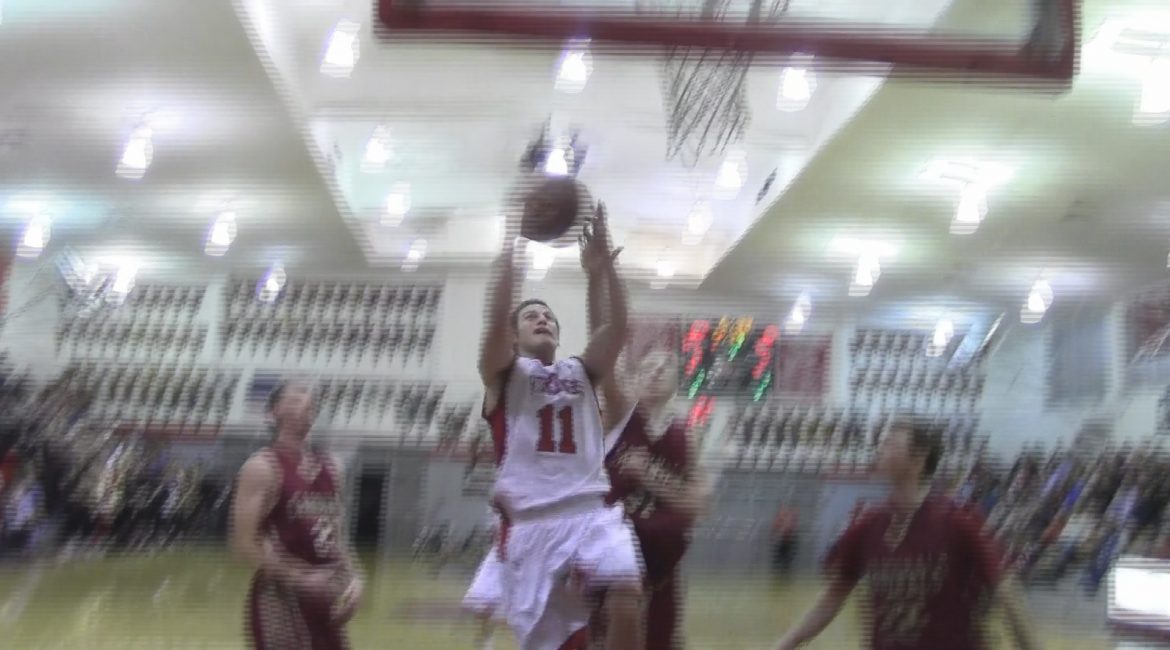 In the last three games, No. 1 Montgomery has met teams that were looking for a win to move into a first place tie.  The closest game of the three was on Thursday night and it wasn’t that close as they defeated No. 5 Maria Carrillo 43-29.

In all three games Montgomery had its biggest lead in the first half.   On Thursday, Alec Raven scored eight points as the Vikings raced out to a 9-0 lead.   Montgomery had a 14-2 lead after one and Maria Carrillo wouldn’t get to under double figures after that as the record goes to 14-4 overall and 6-0 in league play.  The 14 point difference is the closest league game Montgomery has been in.

The race for finishing behind Montgomery is a good one.   With the loss to Montgomery, Maria Carrillo fell to 4-2 which is part of a three way tie for second with Cardinal Newman and Ukiah.  Windsor is one game back of that at 3-3 and then Casa Grande checks in at 2-4.

In a game to move into a second place tie with Maria Carrillo, No. 9 Cardinal Newman continues to confuse the heck out of everyone by taking a 45-38 win over No. 7 Windsor.  The win snapped a two game losing streak in which Cardinal Newman was outscored by an average of 27 a game.

No. 4 Ukiah moved into the second place tie with a 57-45 win at Rancho Cotate.  Brian Sherwood and Gabe Knight combined for 36 points to lead the way for Ukiah who had 20 point lead with five minutes left.  Anthony Matteri  scored 17 for Rancho Cotate.

In the other NBL game, Casa Grande held off Santa Rosa 60-54 in a game between 1-4 teams.  The third quarter was the difference as Casa Grande jumped out to an 18 point lead.  Will Crain led the way with 18 points. Dustin Rome scored 19 of a game and season high 23 for Santa Rosa.

Casa Grande has been battling some health issues and is getting healthy.  That’s the good news.  The bad news is they end the first half of league play at Montgomery.

The biggest game in the battle for second place on Monday is Windsor at Ukiah.

Over in the SCL the top of the race stayed the same with Analy having a one game lead over Piner after both teams won on Thursday night.

Analy went on the road and defeated Sonoma Valley 53-30 in a game they controlled from the start.  Nick Fujii has a season high 17 points.  The sophomore is averaging 3.4 a game, but has scored in double figures twice in the last three games.

Sonoma Valley, who would have moved into a first place tie with a win, was led by Jesse Summers with 11 points.   Summers, who is the Dragons leading scorer, has scored in double figures in eight of nine games.

Sonoma Valley is two games behind Analy.  In between is Piner who defeated El Molino 61-45.  Keith Adams scored 24 to lead the Prospectors.   El Molino, who got 17 from Louie Rampone, falls to 2-4 in league play.

El Molino is one game behind Elsie Allen for the final spot in the SCL post season tournament and start the second half on Tuesday at Elsie Allen.   In the first meeting Elsie Allen took a 39-33 win.

On Thursday Elsie Allen, who had lost three of four, defeated Healdsburg 45-25.   Erik DeLeon scored 17 for the Lobos who put the game away with a big third quarter.

Elsie Allen is one game behind third place Sonoma Valley.

The difference of the SCL race at the top is Analy’s home 49-47 win over Piner on January 11th.   The way the schedule works out it the two teams will not meet again until the last game of the league season on February 13th.