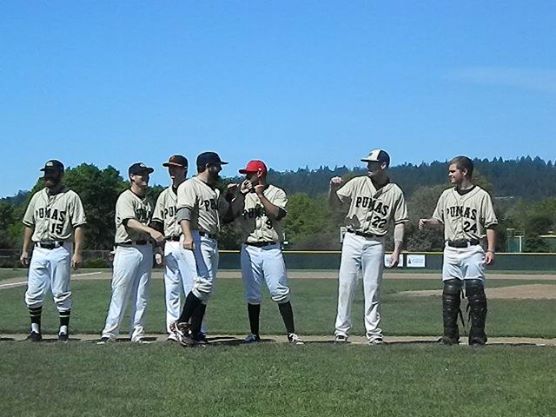 The way the race started, this isn’t a surprise, but the NBL Softball race is going down to the last day.   The Maria Carrillo Softball team does know they will get their second straight championship pennant.   What still has to be decided is if they will have to share it.    Maria Carrillo and Santa Rosa both won so the Pumas have a one game lead with one to go.

Maria Carrillo used the same combination that has served them so well this season to defeat Montgomery 3-0.

Part one of the combination is Robin Johnson’s pitching.    She pitched a two  hitter, giving up the second with one out in the fourth and then retired the last twelve batters she faced,  striking out five of the ten she had in the game.  She raises her record to 15-3 and records her third shutout of the season.

Maria Carrillo has won nine straight and is 17-5 on the season.

Santa Rosa kept its hopes alive for a co-championship with a 4-1 win over Rancho Cotate.   Briana Doane was the offense for the Panthers with a three run homer in the third and an RBI double in the sixth.  The homer wiped out a 1-0 Rancho Cotate lead.

Denia Vera went the first six to get the win.   Johanna Peelen finished things off by striking out the side in the seventh and raises Santa Rosa’s record to 14-5.

There is no post season tournament for NBL Softball, the only sport in the NBL and SCL world that doesn’t have one.   It is also the only one that the regular season stretches to next week.   The regular season ends on Tuesday with Maria Carrillo hosting Cardinal Newman and Santa Rosa at Ukiah.

For the rest of the leagues it’s about whether the champion will finish undefeated or not.   One team did on Thursday and that was the Petaluma softball team who wrapped up league play with an eight inning 6-4 win over Analy.     Petaluma ends the regular season with a ten game winning streak and an 18-6 record.   It was their second league extra inning.

Freshman Emily O’ Keefe went the distance to get the win.   Petaluma went into the bottom of the seventh with a 4-3 lead.   Analy tied the game and had the bases loaded, but O’ Keefe got out of it. That kept Petaluma alive and they took advantage of it in the eighth with a two run inning for the win.   Lily Ryan drove in the game winning runs with a single.  O’ Keefe then struck out the side to end the game.

It is the second straight season the Petaluma has gone through league play undefeated.

Two baseball teams, one in the NBL, the other in the SCL, try to finish off undefeated league seasons today.

In the NBL, Maria Carrillo hosts Cardinal Newman.     The Pumas, who wrapped up their first league title since 2001 with a win over Montgomery on Wednesday, are looking for their 19th straight win and to raise their record to 22-2.

Meanwhile Analy goes for its 14th straight win at Healdsburg.    Analy is 19-4 on the season and will try to finish the SCL undefeated and reach the twenty win mark for the second straight season.

All three of these leagues will have post season tournaments next week.   The matchups for first round games are set in all three.

One other note from the NBL Softball World involves Windsor’s Angelica Terrel.  When she first injured her ankle against Ukiah on April 15th, it appeared to be broken.   It turned out to be a severe sprain and the senior set an unlikely goal of returning for senior day.

Well senior day was yesterday and there she was in the lineup as an extra hitter and in her first at bat in nearly a month she hit a line drive single to right field to right.  Later she would walk and reach on an error.   She is hitting .605 on the season.

Ukiah ended up winning the game 5-4.