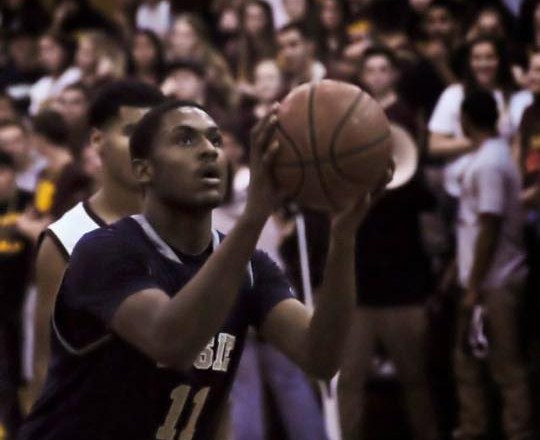 One week ago today the Elsie Allen Boys Basketball team was traveling to Piner in what was called here, one of the biggest games in school history.  The thing about big games is that as the season moves on, the games get bigger.
You could call “bigger” tonight.
Elsie Allen hosts Analy, which much like the Super Bowl has a double edged meaning when it comes to history.  In the Super Bowl it was, “Would Seattle repeat or would Brady get No. 4.”

For the local world, this basketball game means just as much, maybe more.
A win will give Elsie Allen’s its 19th win of the season, which will be a school record.  If they don’t get the victory here they will have probably have four more games to get that school record win.  More importantly on the history note is that they are also trying to get their first league championship in school history.  With three games to go they are 8-1 in league play, which is a half-game ahead of Piner who sits at 8-2.
The other side of thst double edge, as far as history is concerned, is Analy and the dynasty they have going in the SCL race.  Over The last decade, the SCL has mostly been won by Analy.  The numbers are three straight, five of six and seven of nine league championships.  For them to add to those numbers this is a must win at Elsie Allen tonight.
In the first meeting on January 16th Elsie Allen went to Analy and took a 56-48 win.
THURSDAY RESULTS
BOYS
NORTH BAY LEAGUE
No. 1 Casa Grande 49 No. 5 Windsor 34
No. 2 Montgomery 68 Rancho Cotate 19
No. 3 Cardinal Newman 68 Ukiah 41
Maria Carrillo 68 Santa Rosa 60
The league race is now a three team race with one week and three games to go.  The loss by Windsor drops them three games back and puts them in the spoiler role when they host Montgomery on Monday.
Casa Grande scored the first ten points in its win over Windsor.  Scotty Cole had 17 points and had Jon Christy had another double-double with 11 points and 17 rebounds.
Casa Grande has a one game lead over both Montgomery and Cardinal Newman who both had one sided wins.
FEATURE GAMES ON THE LAST WEEK OF THE NBL RACE
MONDAY—Montgomery at Windsor
WEDESDAY—Casa Grande at Montgomery
FRIDAY—Cardinal Newman at Casa Grande
In the other game played last night Clayton Andrews scored 37 points as Maria Carrillo defeated Santa Rosa.  It was a 45-45 tie going into the fourth quarter when Andrews took control of the game outscoring Santa Rosa by himself by a 16-15 score.
Both teams are set up for spoiler role in the NBL race. On Monday, Maria Carrillo travels to Cardinal Newman. Santa Rosa ends the league race with games against Cardinal Newman and Montgomery.
GIRLS
SONOMA COUNTY LEAGUE
No. 4 Petaluma 36 No. 3 Analy 34
No. 5 Sonoma Valley 52 El Molino 25
Piner at Elsie Allen
Healdsburg BYE
It was a defensive game between Petaluma and Analy.  The only player that didn’t seem to follow the trend was Petaluma’s Joelle Krist who scored 25 points as Petaluma moved into second place with a win over Analy.  With all the points Krist scored is was a basket by Allison Scranton with ten seconds left that was the game winner. Those were the only points that Krist didn’t score for Petaluma in the fourth quarter.
Analy had rallied from a nine point halftime deficit to tie the game. They got most of that back in the third quarter when they outscore Petaluma 7-0.  Jenna Petray scored 14 to lead Analy.
Petaluma has won five straight.
Sonoma Valley kept its lead with the win over El Molino.  Sonoma Valley is looking for its first SCL Championship since 2008 when they tied for the championship with Petaluma.
SATURDAY SCHEDULE
Elsie Allen at No. 3 Analy
Healdsburg at No. 4 Petaluma
Piner at No. 5 Sonoma Valley
El Molino BYE
FRIDAY SCHEDULE
BOYS
SCL
No. 8 Analy at No. 4 Elsie Allen
No. 10 Sonoma Valley at No. 6 Piner
Petaluma at Healdsburg
El Molino BYE
Sonoma Valley has already had an impact in the league race and now tries for another one.  They have won three straight with the streak starting with a 53-46 win over Analy.  Sonoma Valley is tied with Analy for third place in the loss column, two games behind first place Elsie Allen.  Piner is in between those three teams at 8-2.
Piner defeated Sonoma Valley in the first game 60-51.  Sonoma Valley ends the regular season at Elsie Allen.
A win for Sonoma Valley will assure that they will finish over .500 in league for the first time since 2010 when they finished 7-5.
Overall the Dragons are 12-11.  They haven’t finished over .500 overall since 2005 when they finished 17-13.
NCL I
Lower Lake at No. 7 Cloverdale
No. 9 Willits at Fort Bragg
Middletown at Kelseyville
Clear Lake at St. Helena
LEAGUE OVERVIEW: Cloverdale took control of the league race with its win over Willits on Tuesday.  They have a two game lead with Willits and Kelseyville tied for second.
Cloverdale doesn’t have any games left with Willits or Kelseyville.
GIRLS
NBL
Maria Carrillo at No. 1 Cardinal Newman
Rancho Cotate at No. 2 Santa Rosa
No. 9 Windsor at No. 7 Montgomery
Ukiah at Casa Grande
LEAGUE OVERVIEW: Cardinal Newman has a one game lead with three to go.  They are three games away from finishing league play undefeated.  The last team to do that in the NBL Girls race was Maria Carrillo in 2008.
Santa Rosa is one game back.  Santa Rosa is at Cardinal Newman next Tuesday Night.
The winner of the Windsor-Montgomery game will probably be the No. 3 seed in the NBL post season tournament.
NCL I
No. 8 Kelseyville at No. 6 Middletown
Fort Bragg at Willits
St. Helena at Clear Lake
Cloverdale at Lower Lake
There are still four games to go, but it is showdown time as Middletown goes into the night with a one game lead over Kelseyville.  Kelseyville won the first game 49-42.
My email address is jacpasquini@comcast.net
You can also now follow me at twitter @homer2612