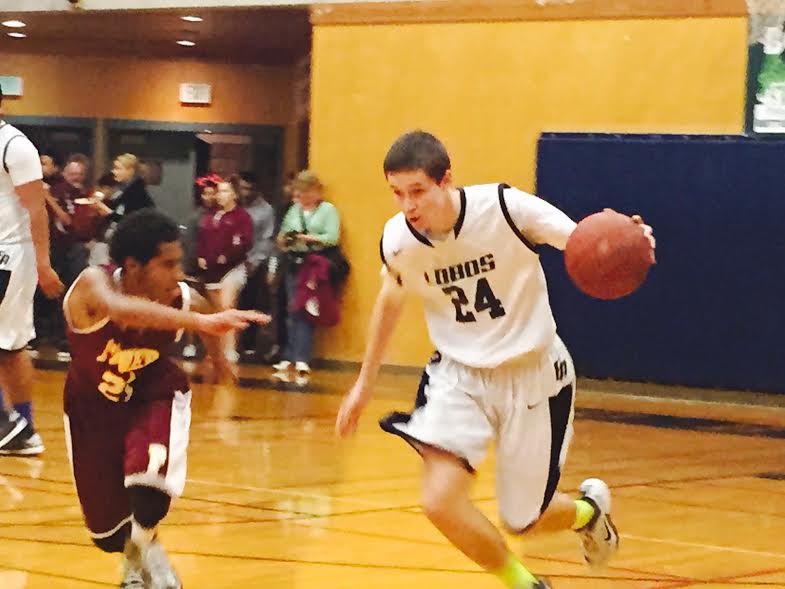 When the last realignment for the North Bay and Sonoma County Leagues took place two years ago, it was a simple trade, Casa Grande and Windsor switched leagues with Elsie Allen and Piner.


The realignment was done for more of a competitive balance in the two leagues and in the case of Elsie Allen and Piner, those two schools. Those two teams meet tonight at Piner, with the winner having a leg up in the race for the SCL championship.  The two teams are playing in for sole possession for first place.  That is because on Wednesday Analy, who went into the night tied with Elsie Allen and Piner, was defeated by Sonoma Valley (details below).
The reason for Piner leaving the NBL for a more competitive situation wasn’t because of its basketball program.  Yes, they did finish under .500 the last two seasons in the North Bay League, although in 2012 they were just under .500 at 6-8.  The four years before that the finished over .500.  In 2008 they won a Co-Championship.  In 2009, they won the NBL post season tournament for the sixth time beating Cardinal Newman in the championship game.  That was a Cardinal Newman team that went into the game 28-0.
So the success that Piner has had since coming to the SCL isn’t a surprise.  In 2013, they finished third, last season second, one game behind the annual champion Analy.
On the other hand, the Elsie Allen basketball team was one of the reasons for realignment.  They did have their moments, but not many.  In 2010 they went 15-12 and finished 7-7 in NBL play . In 2007 they went 18-11 and 9-5, the only time they finished over .500 in league play.  It was also the only time they qualified for the NBL postseason tournament, losing to Cardinal Newman in the first round after beating them twice in the regular season.  Even though the team is the standard for the school in athletics, which includes the only North Coast Section playoff win in school history, they still were never a major threat for the NBL championship.  The two wins over Cardinal Newman cost the Cardinals a tie for the league championship with Montgomery.
Besides that it wasn’t pretty.  The last two seasons they went a combined 2-26, losing all 14 in 2012 which was its last season in the North Bay League.
It didn’t start out much better in its first season in the SCL when they went 2-10.
It has taken a turn for the better.
Last season they went 18-10 overall and 9-5 in SCL play and qualified for the post season tournament.  The 18 wins tied the 2007 team for the most in school history.
The record eighteen wins could be topped as early as next week.  They are 16-5 and have six regular season games left and at least two playoff games, one in the SCL post season tournament and another in the NCS playoffs.
Despite the history, don’t call this season a Cinderella story.  The Lobos were not only hoping for a season like this, but expecting one.  With a roster full of talented seniors, they saw this season coming.
Then the season started out with a disaster.  In the first scrimmage, Joe Hoeup broke his ankle and it put a damper on what looked like a special season.
But the season is on schedule.  They have been led by Jalen Busby, who is averaging 20 points a game and has made a case for being the best player in the area.  If he isn’t the best, he is on a short list as one of the best.  Without Hoeup, they went to Analy and won which wouldn’t be a stretch to call the best win in school history, although those Cardinal Newman wins in 2007 would give the Analy win a good run for its money.
Now Hoeup is back.  He played in his first game Wednesday night . In ten minutes he scored nine points, dished out four assists and had two steals in a win over Healdsburg.  Last season he averaged 17 a game.
The school record for wins is in range as is the first league championship.
Tonight would go a long way toward both of those, in what is one of the biggest games in school history.

THURSDAY SCOREBOARD
GIRLS
NORTH BAY LEAGUE
No. 1 Cardinal Newman 72 Rancho Cotate 32
No. 2 Santa Rosa 66 No. 5 Windsor 55
No. 8 Montgomery 59 No. 9 Ukiah 55
Casa Grande 37 Maria Carrillo 29
The top stays the same with Cardinal Newman holding a one game lead over Santa Rosa.
Kylie Kiech and Lauren Walker each scored 14 as Cardinal Newman defeated Rancho Cotate.
In a game for second place, Kylie Oden had a season high 27 point,s as Santa Rosa defeated Windsor.  Santa Rosa had a nine point run, part of it to end the second quarter and the other to start to third to take a 57-45 lead. Oden also had a season high nine 3’s to give her 17 in the two games this week.
It is a mess behind the two leaders.  Montgomery and Windsor are tied for third one game ahead of Ukiah.
Montgomery took that spot with the win over Ukiah.  Until the fourth quarter, this was a back and forth game ranging from an Ukiah double digit lead to a close game.
Ukiah had a 13 point lead in the first quarter and saw the lead cut to  four by halftime.  They then scored the first six points of the third quarter to make it 35-25.  The Wildcats went the next six minutes without a point before Cassidy Schutz hit a three to carry a 38-32 lead into the fourth quarter.
Montgomery scored the first ten of the fourth quarter to take a 42-38 lead.  Ukiah’s Haylie Arnerich hit a three, part of her game high 20 points, to cut it to one,but it was quickly back to four on a three by Montgomery’s Destiny Grayer, which was the start of a 8-1 run to put the game away for Montgomery.  It was one five 3’s for Grayer which was all of her 15 points.  Both of those numbers are season highs.
Shayla Newman had her eighth double-double of the season with 16 points and 14 rebounds.  She also tied a season high five blocks.
In the other game, Casa Grande rallied from ten down in the fourth quarter to defeat Maria Carrillo.  Molly Lunquist scored 11 points.  Joy Jovick had eighteen rebounds for Casa Grande.
SONOMA COUNTY LEAGUE
No. 4 Analy 54 Healdsburg 36
No. 6 Petaluma 49 Piner 34
El Molino at Elsie Allen
No. 3 Sonoma Valley BYE

Analy takes over sole possession of first place in the SCL with the win over Healdsburg. Jenna Petray and Isabel Niedermair each had a double-double. Petray had 23 points and 12 rebounds which earned her the YSN365.com player of the game. Niedermiar had 11 and 10.
Analy is in first place because they have played one more game than Sonoma Valley.  Both teams have one league loss and meet at Sonoma Valley on Tuesday.
WATCH THE FULL GAME RECORDING HERE
Petaluma is one game behind after its win over Piner.  Allison Scranton led Petaluma with 19 points.  After the league bye on Tuesday, Petaluma is at Analy on Thursday.

FRIDAY SCHEDULE
BOYS
NORTH BAY LEAGUE
No. 1 Cardinal Newman at Rancho Cotate
Maria Carrillo at No. 2 Casa Grande
Ukiah at No. 3 Montgomery
Santa Rosa at Windsor
It is an upset alert in the league tonight, as the top four teams meet the bottom four.
Casa Grande is in sole possession of first place, one game ahead of Cardinal Newman, Montgomery and Windsor.
Windsor has to be careful that they are not looking ahead.  Next week they have Cardinal Newman and Casa Grande on the schedule.
SONOMA COUNTY LEAGUE
No. 4 Elsie Allen at No. 5 Piner
No. 8 Analy at Petaluma
El Molino at Sonoma Valley
Healdsburg BYE
Pretty much set up the Elsie Allen-Piner game.  Piner defeated Elsie Allen 49-43 in the first meeting.  The two teams split games last year with the road team winning both games.
It was expected that the game would be to see who would stay tied with Analy for first place.
Since we are talking big games,  Sonoma Valley came up with one of its biggest wins in a while, on Tuesday, by beating Analy 53-46.  Cyle Caselli was one of three Dragons in double figures with 15 points.
Sonoma Valley is 9-11 on the season and 4-3 in SCL play.  They are in fourth place two games out of first.
Sonoma Valley hasn’t finished over .500 in league since 2010.  They went 6-6 last season after back to back 2-10 season.
NCL I
No. 7 Willits at Clear Lake
Kelseyville at No. 9 Cloverdale
Fort Bragg at Middletown
St. Helena at Lower Lake
Willits and Cloverdale are tied for first, one game ahead of Kelseyville. Cloverdale is at Willits on Tuesday.
That will be Cloverdale’s third game in five days.  After the game with Kelseyville tonight, they have a non-league game with Fortuna on Saturday.  That is a NCS Division 4 seeding kind of game. Fortuna is 15-6 on the season.
GIRLS
NCL I
No. 7 Middletown at Fort Bragg
Cloverdale at Kelseyville
Lower Lake at St. Helena
THURSDAY RESULT
Willits 49 Clear Lake 20
Middletown at 6-1 has a one game lead over Kelseyville.  The Willits win over Clear Lake puts both of those teams at 5-3. Cloverdale is two back at 4-3.
ITS COMING
In some ways it has felt like spring, it sure hasn’t felt like Winter.
While the SRJC basketball team is defending its state championship,  the SRJC baseball team has started its season.  They lost their opener on Thursday, giving up two runs in the eighth in a 7-6 loss to Chabot.
My email address is jacpasquini@comcast.net
You can also now follow me at twitter @homer2612
Share