Time was right for Tom Kirkpatrick

As Tom Kirkpatrick pondered his return to coaching football, this time at Windsor High School, the decision became increasingly easy.
“Things had to be just right,” said Kirkpatrick, who coached in various capacities at Healdsburg High, including 19 seasons as head coach. “Before I was first contacted by (Windsor principal) Mark Elin I really hadn’t thought seriously about it.”
He said when the job first opened up in Decemer, some my old coaches and I were watching the Oregon-Florida game and laughing about the ‘what if’ aspect of our coming back, but nothing serious.”
Kirkpatrick, 62, said a recent “tweet” on ysn365.com got the word out that he might be a candidate and he got a lot of inquiries, including from former players, although that had started to die down.
First order of business was talking it over with his wife, Becky, who basically told Kirkpatrick, who last year retired from teaching at Healdsburg High, to go for it if that’s what he wanted.
“I realized I didn’t want to do it alone, so I contacted all my (Healdsburg) coaches,” explained Kirkpatrick. “I had no idea what their response would be — I thought I would get a few ‘no’ answers — but they all seemed eager to do it.”
Kirkpatrick said he would not have applied if his former coaches had not come on board, and he thinks being able to produce an instant, veteran staff may have helped in the interview process, which reportedly came down to four serious candidates.
Kirkpatrick’s assistants at Windsor will include Gale Bach, Bob Besancon, Patrick McDowell, Joe Passalacqua, Mike Ruiz and Pete Thomas, with more more coach not yet confirmed.
“I told the principal that if he could find a younger guy, that he should think about hiring him,” said Kirkpatrick, adding that he would not have been interested in assisting another coach.
He admits to missing the Friday night games, but also missed the opportunity to train and develop players. “But just the idea of stepping out on the field again for a game . . . it’s in my blood.” 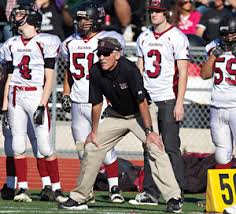 The Windsor program will be a step up in several ways for Kirkpatrick. The Jaguars play at the Division II  level because the school has 1,800 students compared to Healdsburg, which is Division IV with less than  700 students.
Windsor also plays in the North Bay League, a more challenging league than the Sonoma County League  where Healdsburg competes.
“There will some pressure to produce,” said Kirkpatrick, a quarterback at Santa Rosa High, Santa Rosa JC and Humboldt State. “I tend to put pressure on myself, usually trying to prove people wrong.”
A question Kirkpatrick and his staff will try to answer is whether the Jaguars can be competitive in the NBL, which includes Cardinal Newman, Rancho Cotate, Casa Grande, Maria Carrillo, Montgomery, Santa Rosa and Ukiah.
“I haven’t heard from the other NBL coaches yet, although I did talk with Paul Cronin (Newman) about coaching prospects when the Windsor job came up,” said Kirkpatrick. “The level of competition in the NBL will be a challenge.”
The preseason schedule was set before previous coach Vic Amick was fired, and includes Petaluma — a longtime SCL opponent — Skyline of Oakland and Miramonte, always a strong team. Last season Windsor was 8-4 overall, but 4-3 in the NBL.
“We have scrimmages set up, including one at American Canyon, but no full-contact camps,” said Kirkpatrick, noting the rule change that doesn’t allow contact in team practices out of season. “That rule is a good thing to protect the kids.”
Kirkpatrick, whose Windsor team will participate in passing leagues, thinks stepping back out on the field — his last coaching season at Healdsburg was 2011 — won’t be difficult. Coaching is what he does, and what he has done extremely well.
“People say kids have changed and in a way that’s true,” he said. “But kids today, if they want to do something and are motivated and willing to work hard to achieve it, that’s all you can ask.”
Kirkpatrick said that being retired creates some good and not-so good situations . It does give him more time to deal with the football program, but as an off-campus coach — it could affect his contact with student players.
“I want to know how guys are doing in class, things I was able to keep on top of at Healdsburg,” he explained. “But although I am an off-campus coach, I definitely plan on spending a lot of time on campus.”
With so many games behind him, it’s tough to pick a favorite team or even a favorite season, but he says coaching his son, Ryan — now age 35 and a fire department paramedic — in 1994-95 is probably a personal favorite.
Kirkpatrick recently moved to Windsor, half a mile from the high school. He and Becky also have a daughter, Alison, age 30, who works at juvenile hall in Santa Rosa.
Kirkpatrick, passionate about his sport and his ability to reach his players, seems eager to make the most of his third run at being a head coach.
“This has all come together for us,” he said. “My desire to work with the kids is as strong as ever.”
Elin, in a press release last week, called Kirkpatrick “the complete package we were hoping to find,” and anyone who has played for, or coached against him would no doubt agree.
Note: Bruce Meadows, who also writes GOLF 707 for ysn365.com, can be reached at bmeadows4sports@aol.com