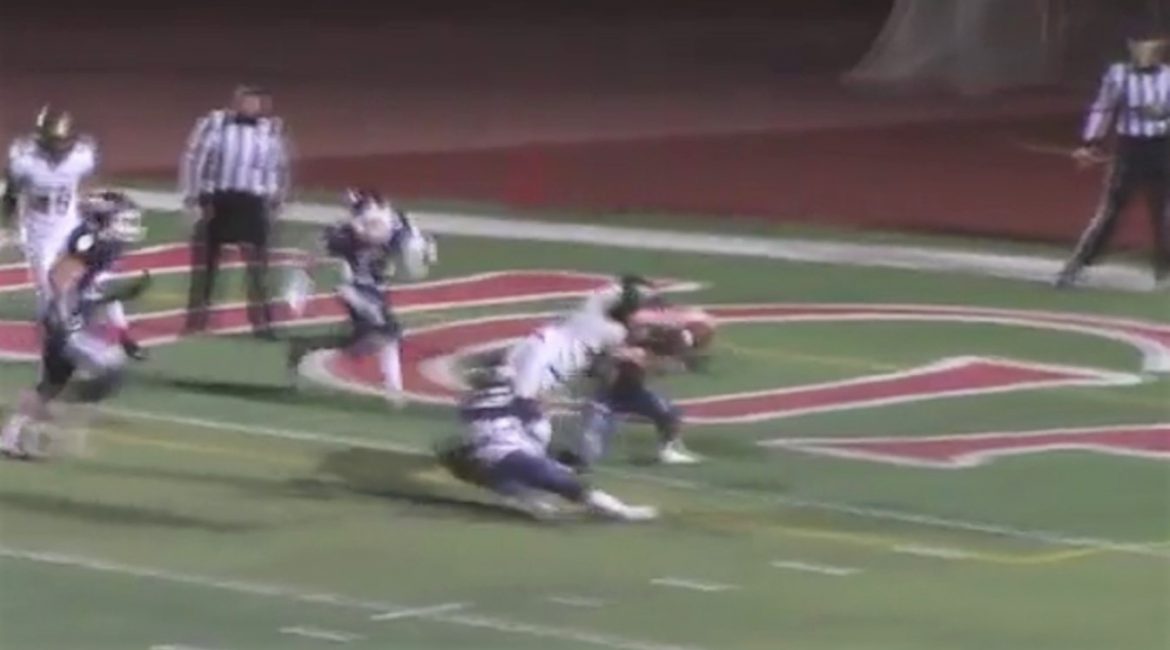 Josh Groesback (Maria Carrillo)…40 carries, 232 yards and four touchdowns. If that wasn’t enough after scoring his last touchdown with :28 left, he ran in a two pointer to score the winning points in the 36-35 win over Rancho Cotate. In the last two weeks he has scored eight touchdowns.
Cole Martin (Maria Carrillo)…Can’t forget about him. He rushed for 178 yards on twenty carries and scored the only Puma touchdown that Groesback didn’t, which was a 45 yard run in the fourth quarter. Maria Carrillo had over 400 yards rushing and zero yards passing.


Jaelen Ward (Rancho Cotate)…With Chris Taylor-Yamanoha out half the game with an injury, the sophomore had his biggest game of the season in the loss to Maria Carrillo. He had seven catches for 128 yards and one touchdown. Going into the game he had 14 catches for 172 yards for the entire season.
Ja’ Narrick James (SRJC)…The Analy Grad rushed for a season high 144 yards and a touchdown in the big 17-14 win over San Mateo. It was the first time he hit the 100 yard mark since the opener. The touchdown was the first score of the game. He also ate up some yardage on the drive to the winning field goal that also ate up the clock.
Luke Bernardi (Cloverdale)…Rushed for 254 yards and four touchdowns in a 47-30 win over Willits. It was his biggest rushing game of the season and the second straight game he hit the 200 yard mark.
Blake Leslie (Willits)…Big night in a losing cause to Cloverdale. He completed 15 of 23 for 315 yards and four touchdowns.
Jose Ramirez (Piner)…Rushed for 150 yards and two touchdowns in a 30-13 win over Sonoma Valley. His first touchdown gave Piner a 10-0 first quarter lead; the second touchdown put things away in the fourth quarter. He is 17 yards from reaching the 1,000 yard mark for the season.
Lucas Dentoni-Luke Wheless (Petaluma)….Combined for 286 yards and six touchdowns in a 48-6 win over El Molino. Five of the six touchdowns were 25 yards or more. Dentoni also returned a blocked field goal for a score.
Joshua Wright (El Molino)…Avoided the shutout with an 83 yard fourth quarter run against Petaluma. The run also put him over 100 yard mark for the game.
Trey Davis (St. Vincent)…It was a tough day for the team, but he almost doubled his season stats catching three balls for 100 yards in a 47-22 loss to Stellar Prep.
Cody Cissna (Point Arena)…Rushed for 125 yards and one touchdown and also caught two passes for 37 yards in a 44-28 win over Rincon Valley Christian. It was the fifth straight game he has rushed for at least 100 yards. He also had nine tackles which was second highest on the team. Point Arena is one of four teams in the NCL III race with one league loss.
Paul Bartholow (Rincon Valley Christian)…Rushed for 78 yards and one touchdown, had nine catches for 93 yards and another touchdown in the loss to Point Arena. He also had twelve tackles, which was second on the team.

Jacob Kalawaia (Upper Lake)…Of his eight tackles, four of them were sacks in a 38-12 win over Mendocino. The win pulled Upper Lake into a virtual tie for first place in the NCL III race. He also rushed for two scores.
Alfio Basile and Niko Lopez (St. Helena)...With running back Jahaiver Otero out most of the game because of an injury, the rushing attack didn’t miss a beat. The two combined for 184 yards on 34 carries in a 28-0 win over Middletown.  Lopez scored three touchdowns, which is the same amount he had scored this season going into the game.  St. Helena scored three of its touchdown in the fourth quarter.
Kono Geaey (Lower Lake)…Three catches for 125 yards and a touchdown in a 32-23 win over Clear Lake. It was the first game of the season that he reached the 100 yard receiving mark.
Kaylor Sullivan (Fort Bragg)…His second 500 yard passing game of the season, this one, exactly 500 yards. He completed 35 of 49 and threw a season high 8 touchdown passes in a 57-24 win over Kelseyville. On the season he is averaging over 350 yards a game and over four touchdown passes a game.
This accomplishment is out of the ordinary and worth the mention.

This accomplishment also comes with a”but.”
The but is that one of his touchdown passes was in the fourth quarter in a game that the score was 48-17 after three quarters. That was also the halftime score, so obviously they did pull back, but according to MaxPreps, Fort Bragg ran sixty total plays, threw 11 rushes and 49 passes. It is an accomplishment, but it doesn’t look like it had to happen.
If Analy wanted to, they could throw for 500 yards in nearly all their SCL games.
Jack Newman (Analy)…Another seven touchdown passes in a 67-6 win over Healdsburg. He went 16 of 19 for a season high 396 yards. The seven touchdown passes are a school record. His touchdown passes went to six different receivers. He didn’t play at all in the second half. Newman went over the 2,000 yard passing mark for the season.
If you think I have missed something or want to sure I don’t, email me to get my attention of who you might think would make this list.
My email address is jacpasquini@comcast.net
Share