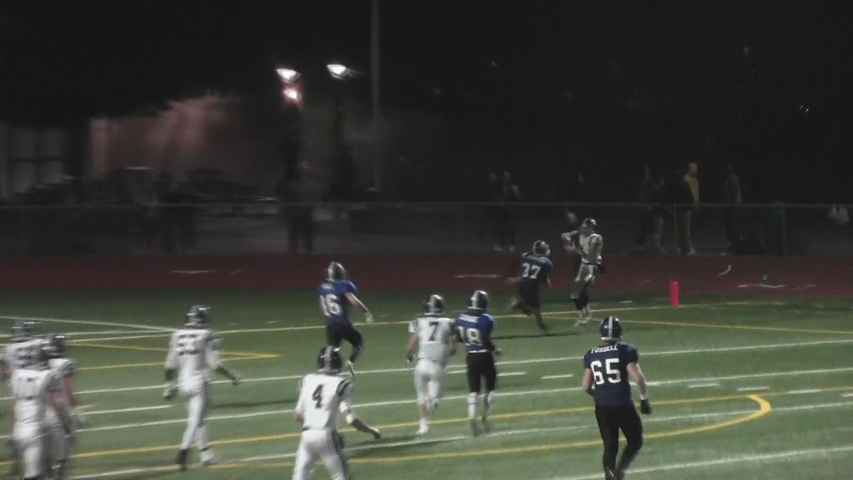 Two perennial North Bay powerhouses would duel in Sebastopol for a berth in the Division 3 championship game. In an exhilarating game that saw points aplenty, the #4 seed Marin Catholic Wildcats would upset the #1 seeded Analy Tigers, 40-35, in a wild back-and-forth classic.


Early on, Tigers QB Jake Newman led a convincing drive down the field, before taking a shot into the endzone and being intercepted by Hunter Juarez, halting a potential scoring drive. Getting down near the goal-line, Marin’s Matthew Dedonatis plowed his way two yards in for the game’s first score. Three straight tries to punch it in at the goal-line on an ensuing Tigers drive would fail, but Newman then found Kyle Johnson on an out-route, hauling in the short pass to tie the game at the end of one quarter.
Jake Newman would then lead an aggressive 3-play, 72-yard scoring drive, in which he finished by faking the handoff, rolling out to the right looking for a receiver, and zinging it 8 yards to Carson Pforsich in the back of the endzone. A perfectly executed play to put Analy up 14-7 with 9:47 left in the 2nd. But Marin Catholic would respond big-time. 6’5” quarterback Spencer Petras, having all kinds of time to throw, fired a bomb 62 yards downfield and beautifully placed into the hands of Ben Skinner who had several steps on his defender, as he jogged in for the touchdown.
Then catastrophe struck the Wildcats as a Tiger punt fell through the hands of the returner, while the ball bounced around freely before eventually being pounced on by Andy Noonan, giving Analy possession deep in Wildcat territory. On the very next play, Newman would connect with Ross Simmons, who fended off his defender and reached over him for a great catch and 28-yard touchdown. But the remaining 1:09 left in the half was plenty of time for Spencer Petras to march his offense downfield to set up Sean Mckeogh, who drilled a 34-yard field goal as time ran out; 21-17 with the Tigers in front at the intermission.
A failed Tiger 4th and-1 gave the Wildcats possession at the Tiger 28, while Petras scrambled and ran 25 yards, eluding a herd of Tiger tacklers along the way before being forced out at the 3-yard line. Petras then ran play-action and found Hunter Juarez in the corner, beating the defender Kyle Johnson and giving Marin a 24-21 lead at the end of three.
A thrilling 4th quarter began with the Tigers finding themselves in a 4th-and-2 situation, but Newman would take the snap, scramble, and fire it to Ross Simmons, who ducked under the tackler and was gone. No Wildcats were back deep as they watched Simmons run away for the 40-yard score. A minute later, Matthew Dedonatis would get the handoff at midfield and blow right through the line, cut it to the outside, and sprint up the sideline past everybody and to the house. They would fake the ensuing extra-point try but the holder was sacked in the backfield, but it was now 30-28 Wildcats as Dedonatis just eviscerated the Tiger defense.

Jack Newman then got intercepted inside his own 20-yard line, while Spencer Petras threw a 5-yard strike to Juarez to extend the Wildcat lead to 37-28 with 7:45 to go. Analy had to regroup, finding themselves in unfamiliar territory this season: being down in the 4th quarter. Jack Newman sparked the rally with four straight completions before firing a laser across the middle to Spencer Vogel, who found the endzone on a 41-yard catch-and-run. It was now just a 37-35 Wildcat lead with 6:43 remaining.
But the Tigers’ defense had no answer for the tandem of Petras and Dedonatis late, as they picked up several pivotal first-downs which ate up huge chunks of clock. With under a minute to play, Marin Catholic sent out Sean Mckeogh who nailed a 27-yarder to extend the lead to 40-35.
The enusing punt return was taken out to the 19, as Jack Newman had to lead the offense 81 yards for the win. A deflating false start penalty backed them up even further, before two Wildcats broke up a pass intended for Eric Bendyk. Liam Oprendek came up with the interception as the ball was tipped in the air, putting the exclamation point on the shocking win for Marin Catholic.
Jack Newman shined in his final game of an amazing career for Analy, erupting for 474 yards on 35 of 50 completions and five touchdowns. Spencer Vogel caught 11 balls for 159 yards, followed by Eric Bendyk, who racked up 137 yards on 10 catches.
The Tigers finish a story-book year at 11-2 and a dominant 6-0 in Sonoma County League play. But this dream season would finally come to an end at home at the hands of the Wildcats, who have bounced the Tigers out of the playoffs now four times within the last decade. Marin Catholic will now have a date with the winner of Rancho Cotate and Bishop O’ Dowd in the Division 3 championship.