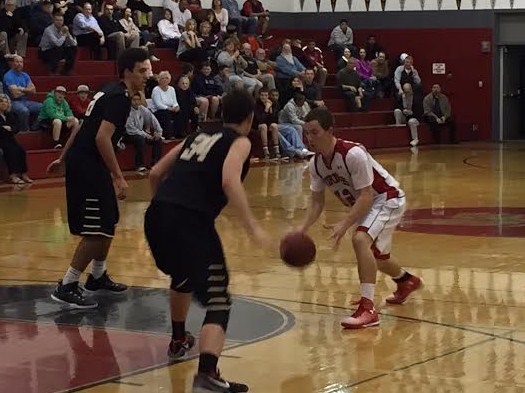 The first round matchups for the North Coast Section Basketball Playoffs are picked and ready to go.  There were no major surprises on Sunday.  The biggest surprise might have been that there was little complaining about where the local teams were seeded.  In fact, for the most part, the local teams did well, including getting an unexpected No. 1 seed in the Division 4 bracket with Cardinal Newman.
Overall there are 43 teams who qualified for playoffs, and it is nearly split down the middle by Boys and Girls teams, with 21 Boys and 22 Girls. The biggest number is in Division 6, where there are 13 teams (seven boys and six girls).
Ten teams have both their Boys and Girls teams going.  Cardinal Newman and Montgomery get to host a first round Boys and Girls doubleheader.  Two Boys teams in Division 6 have a first round bye as does the one Girls team.
Division 1, 2, and 3 begins on Tuesday, with the second round on Friday.
The first round for Division 4, 5, and 6 go on Wednesday, with the second round of Saturday.
Here is the Tuesday Preview:
DIVISON 1 GIRLS
No. 11 Liberty (18-8) at No. 6 Santa Rosa (20-8)…7 pm
Liberty is from Brentwood and finished .500 in the Bay Valley League.  That league has four other teams in the Division 1 playoffs, including League Champion Pittsburg who is a No. 4 seed.
Santa Rosa is looking for a win in the first round of the NCS playoffs for the third straight year.

The Top of Division 2 isn’t as strong as Division 4, at least at No. 3.  Windsor got the same seed in Division 2, as Cardinal Newman did in Division 4.  It should be pointed out that this Division isn’t a piece of cake.  The No. 1 seed Carondelet is one of the monsters of the state.  They have won six of the last seven NCS Division 2 championships, and parlayed that into one state championship and three runner ups.
Still this Division treated the NBL well.  Windsor was treated the best and is two home wins away from qualifying for a Nor Cal Berth.
Windsor is one of three NBL teams hosting opening round games.  The other two are Montgomery and Ukiah. Montgomery is one of two local teams hosting a Girl-Boy doubleheader in Round one.  The other team is Cardinal Newman.
The other two teams, Casa Grande and Analy of the SCL, go on the road.  Analy is at No. 2 Dublin who is 22-3 on the season.  Two of the losses are to Miramonte, who is the No. 1 seed in Division 3.

DIVISION 3 BOYS
No. 7 MIramonte (13-13) at No.10 Elsie Allen (22-6)…7 pm
No. 11 Piner (20-6) at No. 6 Encinal (18-11)…7 pm
No. 14 Sonoma Valley (11-15) at No. 3 Drake (24-4)…7 pm
Considering how much the NCS seeding committee likes head to head, Elsie Allen might have been given a break.  Despite losing two of three to Piner, they were seeded one spot higher.  That one spot was big.  If the two teams would have been switched, Elsie Allen would have had to go on the road to Encinal because they are also a league champion.
Instead, because of the league champion rule, Elsie Allen gets its home game against Miramonte.  The league championship rule only applies in the first round.  Miramonte did have a win over Analy in December.
Piner’s opponent Encinal won the West Alameda County-Shoreline Championship.  The standings for this league aren’t updated, but it appears that the Post Season Tournament carries the weight for the league champion in the NCS Playoffs.
Sonoma Valley travels to Drake, a team that ended up in a three way tie for the Marin County League Championship. Drake went 12-2 in league play; both losses were by one point.
DIVISION 3 GIRLS
No. 11 Encinal (16-12) at No.6 Sonoma Valley (22-6)…7 pm
No. 9 Petaluma (21-6) at No. 8 Campolindo (13-13)…7 pm
This is another example that the committee went for the regular league champion, instead of  head to head.
Encinal finished in a first place tie in the West Alameda County-Shoreline League.  They tied with Castro Valley, who is a No. 7 seed in Division 1.
Petaluma got the dreaded No. 9 seed, which means they have to go on the road.  If they win they go on the road again, probably against No. 1 Miramonte.
Petaluma travels to Campolindo, who has lost five of its last eight and finished under .500 in the Diablo Foothill League. Miramonte won the league title, and was one of three teams in that league that had a twenty win season.
My email address is jacpasquini@comcast.net
You can also now follow me at twitter @homer2612