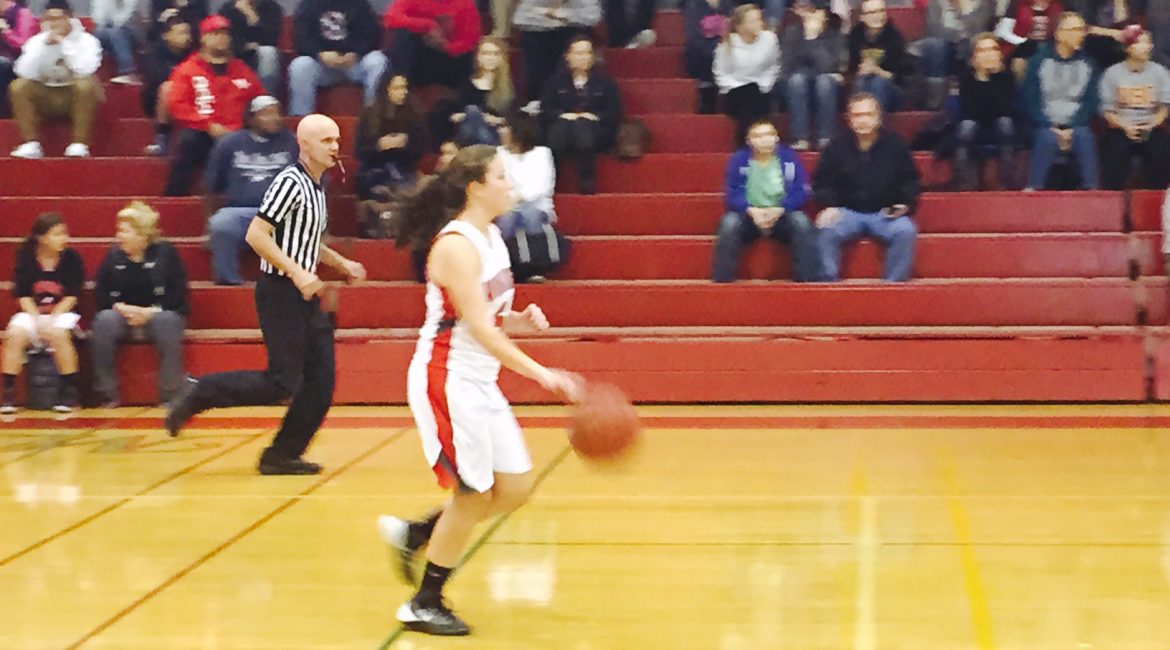 It was a night that had the No. 3 and 4 Girls teams meeting for the top of the SCL race, three of the four NCL I Boys games go down to the final seconds.  The Cardinal Newman and Santa Rosa Girls moved one game closer to a showdown and a big night for the SRJC Men.

BOYS
NCL I
TUESDAY
No. 5 Cloverdale 60 Lower Lake 59
No. 10 Willits 43 Fort Bragg 38
Kelseyville 57 Middletown 53
St. Helena 76 Clear Lake 67 (2 OT)
FRIDAY
No. 5 Cloverdale at Middletown
Lower Lake at No. 10 Lower Lake
St. Helena at Fort Bragg
Kelseyville at Clear Lake
This was a night of close games and disgusted coaches on how the game was ended.
Cloverdale won its game when John McMillan, who scored a game high 20 points, hit a free throw with .8 left.  Hokulani Wickard had just hit a three pointer to apparently send the game into overtime. What happen next as reported by the Record Bee of Lakeport was, “On the inbounds play, McMillan ran into Wickard, who was called for the foul.”  The foul was called in the Eagle’s backcourt.  McMillan hit the first free throw to win the game.
Lower Lake coach Tim Biasotti thought it should have been call an offensive foul.
Dustin Martin led Lower Lake with 16 points.  He was one of three players for the Trojans who scored in double figures.
An offensive foul that was called, was debated as Kelseyville defeated Middletown 57-53.  The offensive foul came in the final minute and it was called on Antonie Guzman as he was scoring what appeared to be a basket to make it 55-55. Middletown coach G.J. Rockwell was the upset coach in this game, who didn’t think it was an offensive game.
Kyle Ellis scored 17 to lead Kelseyville.  The Knights were nine down at the half.  Guzman was the game leading scorer with 19.
The performance of the night belonged to St. Helena’s Chris Saladin, who scored 36 points.  The Saints rallied from a ten point fourth quarter deficit to defeat Clear Lake in double overtime.  Saladin scored 18 of his points after the third quarter.
The normal game of the night was the Willits win over Fort Bragg.  Willits had a twenty point lead in the fourth quarter and held on.  Ryan Hosford scored 15 to lead Willits.
LEAGUE OVERVIEW: Cloverdale has a one game lead over Kelseyville, Lower Lake, St. Helena and Willits.
GIRLS
NORTH BAY LEAGUE
No. 1 Cardinal Newman 54 No. 5 Windsor 36
No.2 Santa Rosa 54 No. 10 Ukiah 42
No. 6 Casa Grande 55 Rancho Cotate 29
Montgomery 51 Maria Carrillo 38
THURSDAY
No. 10 Ukiah at No. 1 Cardinal Newman
Maria Carrillo at No. 2 Santa Rosa
No. 5 Windsor at No. 6 Casa Grande
Rancho Cotate at Montgomery
Cardinal Newman and Santa Rosa stay on top of the league race.
Maya Flores and Hailey Vice-Neat each scored 17 to lead Cardinal Newman over Windsor.  Cardinal Newman took control of the game with a 16-6 run to start the second quarter.
Santa Rosa ended the game with an 8-2 run in its win over Ukiah.  Devin Murray just missed a double-double with 17 points and nine rebounds.  She was one of three Panthers in double figures.
A 19-4 second quarter gave them control and a 17-5 third quarter put it away in the Casa Grande win over Rancho Cotate.  Cassidy McKinney scored 17 to lead the Gauchos.  Mia Cain had a double-double of 11 points and 13 rebounds. She also had three blocks.
Montgomery jumped out to a ten point lead over Maria Carrillo.  Abby Lea scored 19 and Shayla Newman had 14 points and ten rebounds. It is the third straight double-double for the freshman.
LEAGUE OVERVIEW: Cardinal Newman and Santa Rosa are 3-0 and are one game away from playing each other.  Casa Grande is sitting one game back, the loss to Santa Rosa.  Every other team has at least two losses.
SONOMA COUNTY LEAGUE
No. 3 Sonoma Valley 46 No. 4 Petaluma 34
No. 8 Analy 57 Piner 28
Healdsburg 55 El Molino 42
WEDNESDAY
NON LEAGUE
Pt. Arena at Elsie Allen
THURSDAY
El Molino at No. 3 Sonoma Valley
No. 8 Analy at No. 4 Petaluma
Elsie Allen at Piner
Healdsburg BYE
In the matchup of the night, Sonoma Valley had a big fourth quarter in its win over Petaluma.  Grace Cutting scored 11 of game high in the fourth quarter, hitting 3 3’s. Petaluma went into the fourth quarter with a two point lead.  Sonoma Valley outscored them 19-5 down the stretch.
Jenny Eggers also had 3- 3’s for Sonoma Valley and scored 11.
Alexis Dibene scored 11 as Analy defeated Piner.
Hailey Roux scored 27 to lead Healdsburg past El Molino.
LEAGUE OVERVIEW: Three teams are sitting behind Sonoma Valley with one loss.  That is Petaluma, Healdsburg and Analy.  Sonoma Valley has defeated all three teams.  Petaluma is at Analy on Thursday.
NCL I
Kelseyville 49 No. 7 Middletown 42
Cloverdale 62 Lower Lake 39
Willits 52 Fort Bragg 29
Clear Lake 49 St. Helena 19
FRIDAY
No. 7 Middletown at Cloverdale
Willits at Lower Lake
Kelseyville at Clear Lake
Fort Bragg at St. Helena
The showdown between Middletown and Cloverdale for first place was spoiled.
That is because Kelseyville handed Middletown its first league loss.  Kelseyville ended the game with a 9-1 run. Sophomore Riley Goff hit 5- 3’s on her way to a game high 18 points.
Cloverdale had a double figure lead in the first quarter in its win over Lower Lake.  Angel Bernard had 23 points and fourteen rebounds.
Willits did the same to Fort Bragg in the first quarter.  Sophomore Chanel Alexander scored 15.
Taylor Helms scored 22 and Aliza Atkins added 20 as Clear Lake defeated St. Helena.
LEAGUE OVERVIEW: Cloverdale is the only undefeated team left at 3-0.  They are one game ahead of four teams including Middletown, who they host on Friday.
NCL II
Sonoma Academy 66 Upper Lake 54
It was a game between the only undefeated teams in the NCL II race.  Savannah Stoughton had 25 to lead Sonoma Academy.
JC
MEN
SRJC 77 Sierra 72
Parker Farris was one of three Bear Cubs in double figures with 24.
American River and Sierra both went into the night 2-0 in league play and both lost.  Five teams are at 2-1 including SRJC who hosts 0-3 Sacramento on Friday.
WOMEN
Sierra 54 SRJC 45
SRJC Women have lost two straight and are 1-2 in league play.
WEDNESDAY SCHEDULE
BOYS
NORTH BAY LEAGUE
No. 1 Cardinal Newman (2-0) at No. 7 Windsor (2-0)
No. 2 Montgomery (1-1) at Maria Carrillo (1-1)
No. 6 Casa Grande (2-0) at Rancho Cotate (0-2)
Santa Rosa (0-2) at No. 9 Ukiah (0-2)
SONOMA COUNTY LEAGUE
Petaluma (0-2) at No. 3 Piner (2-1)
No. 4 Elsie Allen (1-1) at El Molino (0-3)
No. 8 Analy (3-0)at Healdsburg (1-1)
Sonoma Valley (2-1) BYE
My email address is jacpasquini@comcast.net