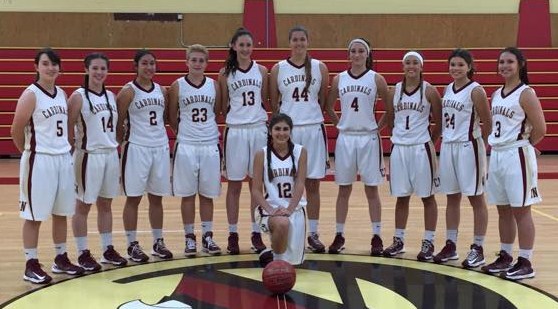 This was a headline you could see coming for some time.
The Cardinal Newman Girls made it official, winning the North Bay League championship.  It came one season after they tied Santa Rosa for the title.
To wrap up the title, Cardinal Newman defeated Santa Rosa 65-43 in a game between the top two teams in the league and area.  The Cardinals weren’t as dominating as they have been, which tells you how dominating they have been.  The 22 point spread is the second lowest difference of any league game they have played.  The previous low was 19 which were at Windsor and Ukiah.


Kylie Kiech scored 17 points, one of three Cardinal Newman players in double figures.  Cardinal Newman has won fourteen straight and is 20-6 on the season.
There was a milestone for Santa Rosa, who is now 18-7, Senior Kylie Oden scored 10 points to put her over the 1,000 mark for her career.
GIRLS
NORTH BAY LEAGUE
TUESDAY
No. 1 Cardinal Newman 65 No. 2 Santa Rosa 43
No. 7 Windsor 50 Rancho Cotate 40
No. 8 Montgomery 46 Casa Grande 24
Ukiah at Maria Carrillo (No report)
THURSDAY
No. 1 Cardinal Newman at Casa Grande
No. 8 Montgomery at No. 2 Santa Rosa
Maria Carrillo at No. 7 Windsor
Rancho Cotate at Ukiah
LEAGUE OVERVIEW: The league race ends on Thursday.  The four teams are set for the NBL post season tournament.
Windsor and Montgomery are tied for the No. 3 seed.  Windsor holds the tie-breaker because of a 2-0 record against Montgomery.
Cardinal Newman and Santa Rosa will host a first round game on Tuesday the 17th.
SONOMA COUNTY LEAGUE
No. 3 Sonoma Valley 46 Healdsburg 13
No. 4 Petaluma 57 Elsie Allen 8
No. 5 Analy 53 El Molino 25
Piner BYE
THURSDAY
Elsie Allen at No. 3 Sonoma Valley
El Molino at No. 4 Petaluma
Healdsburg at Piner
No. 5 Analy BYE
LEAGUE OVERVIEW: Sonoma Valley cinches a tie for the SCL crown and wins its 20th game of the season.
The winner of the Healdsburg –Piner game will get the No. 4 spot in the post season playoffs.
The only seed that is set for the post season tournament is Analy at No. 3.
Sonoma Valley has a one game lead over Petaluma, who has the tie-breaker advantage.
NCL I
TUESDAY
No. 6 Middletown 49 Cloverdale 34
No. 9 Kelseyville 42 Clear Lake 30
Lower Lake 56 Willits 45
Fort Bragg 43 St. Helena 18
THURSDAY
No. 6 Middletown at Clear Lake
Fort Bragg at Cloverdale
FRIDAY
No. 9 Kelseyville at Lower Lake
Willits at St. Helena
LEAGUE OVERVIEW: With three games to go Middletown has a two game lead over Kelseyville.  Cloverdale and Clear Lake were eliminated from the league race.
BOYS
NCL I
No. 6 Cloverdale 61 Middletown 42
No. 10 Willits 56 Lower Lake 45
Clear Lake 62 Kelseyville 54
Fort Bragg at St. Helena (St. Helena won)
THURSDAY
No. 6 Cloverdale at Fort Bragg
Middletown at Clear Lake
FRIDAY
St. Helena at No. 10 Willits
Lower Lake at Kelseyville
LEAGUE OVERVIEW: Cloverdale has a two game lead over Willits and three over Kelseyville with three to go.
My email address is jacpasquini@comcast.net
You can also now follow me at twitter @homer2612
Share