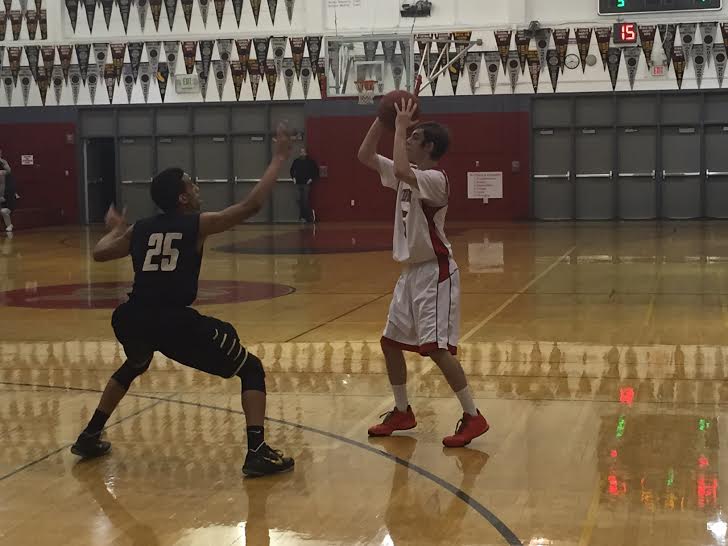 In a battle to keep pace with the other leaders in the NBL race, Windsor gave Montgomery its best shot, but Montgomery, looking like the Montgomery team we have come to know over the years, had the answer and dominated the last quarter and a half to take a 53-39 win.


So Windsor, who one week ago tonight shook up the NBL race with a win over Cardinal Newman, losses the next two against the other two leaders in the NBL race.  Meanwhile Montgomery, since a five game losing streak that was capped off by a twenty point loss to Cardinal Newman, has won its last four.
This was closer than the score indicated.  Montgomery led all the way but every time they got some distance, Windsor came back.  That is until midway through the third quarter.
Montgomery had taken its biggest lead of the game 34-23 early in the quarter.  Windsor then went on a 13-3 run to cut it to 37-36 with 2:20 left in the quarter.  Gabe Knight scored the last eight points of the run and ended with a game equaling high 16 points.
Then a Montgomery team showed us something we haven’t seen much of this season.  Windsor tried to take away 6’ 11” Erik Poulsen, who also had 16 points and 15 rebounds, including what seemed like most of them in the second half. Montgomery took advantage by hitting the three.  The rest of the game they outscored Windsor 16-3.  The first twelve points of the run were on three point shots, three of them by Joe Peterich.  The other was by Jack Fitchie.  Those two combined for 26 points.
So Windsor goes through it’s murderers row going 1-2.  The home team in those games won all three.
Now Montgomery’s takes its turn.  Two of the next three games, they go on the road against the other two leaders starting Thursday at Casa Grande.
NORTH BAY LEAGUE
No. 1 Cardinal Newman 64 Maria Carrillo 35
No. 2 Montgomery 58 No. 6 Windsor 39
No. 5 Casa Grande 82 Ukiah 47
Santa Rosa 67 Rancho Cotate 44

Casa Grande and Cardinal Newman keep pace with easy wins.
Casa Grande exploded for a 30 point second quarter to put things away at Ukiah.  Will Crain lead the way with 22 points.
Cardinal Newman led from the beginning in its win over Maria Carrillo.  Justin Botteri led Cardinal Newman with 20 points.
Santa Rosa won its second straight league game with a win over Rancho Cotate.  The Panthers had two 20 point quarters including the first when they jumped out to a double digit lead.  Shamus Lyons was one of two in double figures with 18 points.
LEAGUE OVERVIEW:  Casa Grande has a one game lead over Montgomery and Cardinal Newman.  That is who Casa Grande finishes the first half of the league race with. On Thursday they host Montgomery and next Monday they are at Cardinal Newman…Windsor is in fourth place two games back and one game ahead of fifth place Santa Rosa.
NCL I
No. 8 Willits 58 St. Helena 40
No. 9 Cloverdale 69 Fort Bragg 45
No. 10 Kelseyville 61 Lower Lake 57
Middletown 54 Clear Lake 47
The three teams tied for first all win.
Willits had a twenty point lead by the half in its win over St. Helena.  Dimitri Betts and Ryan Hosford combined for 42 points.
After a slow start, it was the third quarter that was the difference as Cloverdale beat Fort Bragg.  Cloverdale, who outscored Fort Bragg 23-6 in the quarter, was led by Marcus Poe who score 21.
Kelseyville had more of a battle but held off Lower Lake.  Kyle Ellis hit five 3’s on his way to a game high 22 points.
Cody Chorjel scored 24 to lead Middletown to a close win over Clear Lake.  The big play of the game came with two minutes left with Middletown leading by one.  With the shot clock running down Antonie Guzman banked in a three pointer.
LEAGUE OVERVIEW: Cloverdale, Kelseyville and Willits are tied for first place one game ahead of Middletown…Two of the leaders meet on Friday when Kelseyville travels to Willits.
GIRLS
SONOMA COUNTY LEAGUE
No. 3 Sonoma Valley 59 Piner 25
No. 4 Analy at Elsie Allen (No result reported)
No. 6 Petaluma 57 Healdsburg 47
El Molino BYE
Two of the three leaders won, the other figured to.
Sonoma Valley had a 30 point lead by the half, behind 19 by Jenny Eggers.
Petaluma had a 17 point lead going into the fourth quarter. Allison Scranton had a double-double with 21 points and 16 rebounds.
LEAGUE OVERVIEW…Sonoma Valley keeps its one game lead of Analy (if they won).  Analy fans I am looking for a contact, please email me if you are interested.  Petaluma is two games out.  Healdsburg and Piner are tied for the last post season spot.  Piner is at Healdsburg on Thursday.
NCL I
No. 8 Middletown 52 Clear Lake 34
Fort Bragg 52 Cloverdale 46
Willits 32 St. Helena 11
Kelseyville 50 Lower Lake 34
Ashlyn Welton scored 14 as Middletown pulled away in the second half and defeated Clear Lake.
The surprise of the night happened in Cloverdale where the Eagles dropped their second straight home game, this one to Fort Bragg.  Jamie Mertle and Jaden Gardner combined for 25 to lead Fort Bragg, who won the game in the last two minutes.
Willits outscored St. Helena 18-2 in the second quarter.
Taylor Hale had a season high 12, as Kelseyville pulled away to defeat Lower Lake in the second half.
LEAGUE OVERVIEW: Middletown and Willits are tied for first at 4-1 one game ahead of Clear Lake Cloverdale and Kelseyville. None of the top four teams meet on Friday.
NCL II
No. 9 Sonoma Academy 55 Roseland Prep 40
Trailing 30-29 at the half, Sonoma Academy outscored Roseland Prep 16-3 in the third quarter.  Savannah Stoughton scored 16 as they go to 5-0 in NCL II play.
JUNIOR COLLEGE
MEN
American River 64 SRJC 51
San Joaquin Delta lost to Cosumnes River 85-73…3-2…
Despite the loss the race is still wide open and wild.  The wild part is part because of the loss and partly because the other team tied for first, Cosumnes River lost too. Seven of the eight teams are within one game of first place, with the top six, including SRJC, tied at 3-2.
SRJC is at Sacramento City on Friday.  the Panthers are the only team that isn’t within one game of first place.
WOMEN
SRJC 52 American River 48
The SRJC Women are now 3-2 in league two games behind Diablo Valley.
WEDNESDAY SCHEDULE
BOYS
SONOMA COUNTY LEAGUE
Petaluma (1-3) at No. 3 Elsie Allen (3-1)
No. 7 Analy (4-1) at El Molino (0-4)
Sonoma Valley (2-2) at Healdsburg (1-3)
No.4 Piner BYE
It is upset alert for the leaders as one of the leaders has the night off.
Sonoma Valley tries to keep control of the last spot for the post season tournament.
GIRLS
No. 1 Cardinal Newman (5-0) at No. 2 Santa Rosa (5-0)
Rancho Cotate (0-5) at No. 5 Windsor (3-2)
Montgomery (3-2) at No.7 Casa Grande (3-2)
Maria Carrillo (1-4) at No. 10 Ukiah (1-4)
What has turned out fairly quickly to be the biggest show in the Girls game, in the area, is happening when Cardinal Newman travels to Santa Rosa with not only the YSN65.com No. 1 ranking at stake, but the lead in the NBL race.
Last season the two teams played before packed crowds during the regular season in which they traded home wins. Then they played before an even bigger crowd at SRJC ,in the NBL Post Season Championship game, which was won by Cardinal Newman.
If you are planning to go to the game, expect SRHS to be packed.
Also, Montgomery is at Casa Grande.  In the YSN365.com rankings Montgomery is a bubble team, while Casa Grande is at No. 7.  In the league race Montgomery is tied with Windsor for third, one game ahead of Casa Grande for the final spot in the NBL post season tournament.
My email address is jacpasquini@comcast.net
Share