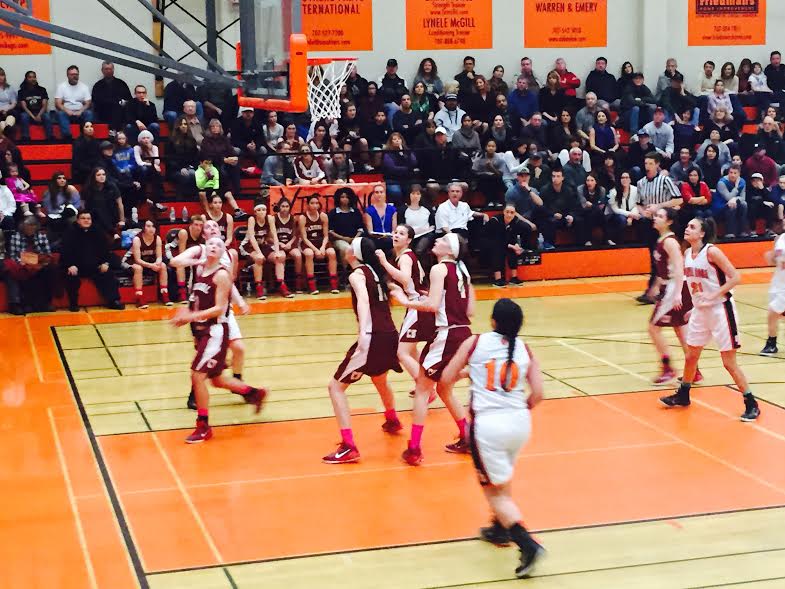 The post season is officially underway, but not for everybody.
The NCL world does have one more week of league play, and championships are being decided.
TUESDAY
GIRLS
NORTH BAY LEAGUE
POST SEASON TOURNAMENT (ROUND ONE)
No. 1 Cardinal Newman 80 No. 8 Montgomery 53
No. 2 Santa Rosa 54 No. 7 Windsor 49
FRIDAY
NBL CHAMPIONSHIP GAME AT SRJC
No. 2 Santa Rosa (20-7) at No. 1 Cardinal Newman (22-5)…6:30
It was a typical NBL game for Cardinal Newman.  A big second quarter put away the win over Montgomery.  Five players scored in double figures as Cardinal Newman raises its winning streak to sixteen.
Meeting for the third time, Santa Rosa had its closest game against Windsor.  After taking an early 11 point lead, they held on for the win.  Emily Codding scored 18 and had 12 rebounds.
The championship game is a rematch of last year’s game won by Cardinal Newman.
SONOMA COUNTY LEAGUE
POST SEASON TOURNAMENT (ROUND ONE)
TUESDAY
No. 3 Sonoma Valley 51 Healdsburg 25
No. 4 Petaluma 70 No. 5 Analy 59
THURSDAY
CHAMPIONSHIP GAME
No. 4 Petaluma (20-6) at No. 3 Sonoma Valley (22-5)…7 pm
Sonoma Valley had a big third quarter to pull away from Healdsburg.  Jenny Eggers scored 19 points.
Petaluma had its biggest offensive game of the season in its win over Analy.  Olivia Baldwin scored 17, one of four Trojans to score in double figures.  Petaluma has won eight straight.
The championship game features the top two teams in the SCL this season.  The two teams split during the regular season.
NCL I
TUESDAY
No. 6 Middletown 73 Lower Lake 40
Willlits 49 No. 9 Kelseyville 36
Cloverdale at St. Helena
Fort Bragg 49 Clear Lake 42
THURSDAY
No. 6 Middletown at Willits
No. 9 Kelseyville at St. Helena
Clear Lake at Cloverdale
Lower Lake at Fort Bragg
BOYS
NCL I
TUESDAY
No. 6 Cloverdale 78 St. Helena 44
Kelseyville 64 No. 9 Willits 60
Lower Lake 58 Middletown 55
Clear Lake 66 Fort Bragg 61
THURSDAY
No. 6 Cloverdale at Clear Lake
No. 9 Willits at Middletown
Kelseyville at St. Helena
Fort Bragg at Lower Lake
END OF REGULAR SEASON
WEDNESDAY SCHEDULE
BOYS
NORTH BAY LEAGUE
POST SEASON TOURNAMENT (ROUND ONE)
No. 7 Windsor at No. 1 Cardinal Newman
No. 4 Casa Grande at No. 2 Montgomery
FRIDAY
CHAMPIONSHIP GAME AT SRJC
Both first round matchups had splits during the league race with the home team winning all four games.
Cardinal Newman also had a win over Windsor in the Brett Callen Memorial Tournament at Casa Grande in December.
This tournament will decide the automatic NCS bid and the No. 1 ranking between Cardinal Newman and Montgomery. Cardinal Newman still is hoping for a No. 1 seed in the North Coast Section Division 4 playoffs.
The Casa Grande-Montgomery game could make things tricky for the selection committee.  A Casa Grande win will give them two out of three against Montgomery.  The committee will have to weigh that against Montgomery being higher in the power rankings and finishing higher in the league race.
SONOMA COUNTY LEAGUE
WEDNESDAY
Sonoma Valley at No. 2 Elsie Allen
No. 8 Analy at No. 5 Piner
FRIDAY
CHAMPIONSHIP GAME (AT TBA)
In an unlikely season, Elsie Allen might have motivation problems.
Who would of thought?
The Lobo’s are meeting Sonoma Valley for the second time in four days.  Last Friday, they wrapped up the SCL regular season championship with a one sided 47-21 win.
One motivation factor they do have, is continuing to add to this historic season by winning their first ever Post Season League tournament game.
No problem with motivation in the other game. Analy and Piner traded home wins during the regular season.
My email address is jacpasquini@comcast.net
You can also now follow me at twitter @homer2612