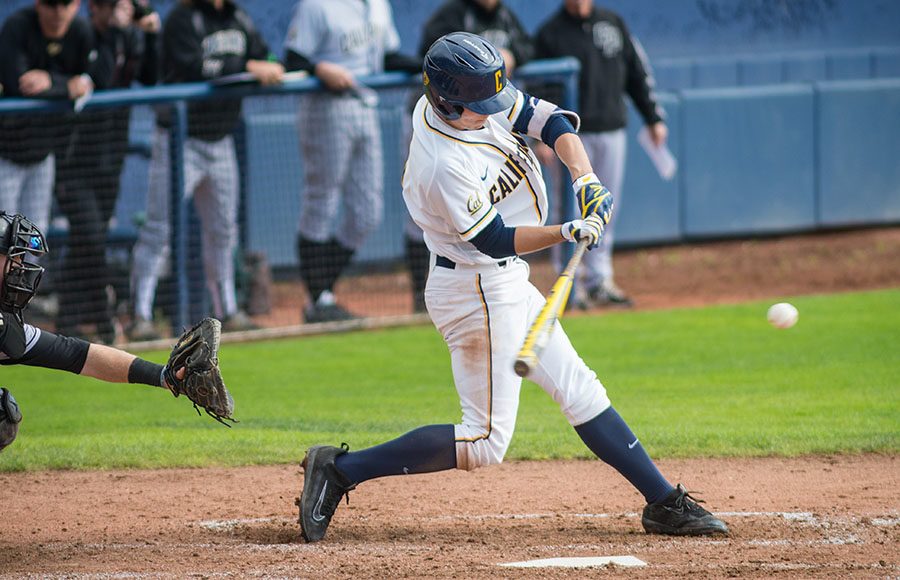 BERKELEY, Calif. – With young talent playing a major role for the Cal baseball team throughout the 2017 season, it came as no surprise that coaches throughout the Pac-12 Conference recognized the production of the Bears’ underclassmen as four players earned All-Pac-12 honors and first baseman Andrew Vaughn was named Freshman of the Year.

Sophomore outfielder/pitcher Tanner Dodson, freshman shortstop Cameron Eden and sophomore outfielder Jeffrey Mitchell, Jr. were also honored as all three earned honorable mention for standout seasons. In addition to receiving recognition as the conference’s top freshman, Vaughn was also named to the All-Pac-12 team.
Vaughn is the first Cal freshman to earn the conference’s freshman of the year honor since the Pac-12 began awarding it in 2000. The Santa Rosa, Calif. native ranked in the top 10 in multiple categories, finishing in a tie with teammate Denis Karas for the conference lead in home runs with 12.
He ranked second in total bases with 121, third in slugging percentage at .555 and hits with 76, fifth in RBI with 50 and seventh in batting average at .349. In all of those categories, Vaughn finished first among all Pac-12 freshmen. His impact wasn’t limited to just what he did at the plate, as he made 10 appearances out of the bullpen and compiled a .996 fielding percentage at first base.
Of course, one week in particular won’t soon be forgotten when telling the tale of Vaughn’s freshman season. In four games against USC and Stanford, Cal’s first baseman went 7 for 15 with three home runs and 12 RBI as he hit a pair of walk-off home runs against the Trojans to help the Bears sweep their Southern California rivals. The offensive explosion garnered National Player of the Week honors from multiple publications as well as Pac-12 Player of the Week.
Vaughn wasn’t the only freshman to make an immediate impact for the Bears. Eden stepped into the starting shortstop role early in the season and never gave it back, finishing the year with a .315 average, six home runs, eight doubles, a triple, 33 runs scored and 24 RBI. The Yuba City, Calif. native appeared in all 54 games and made 51 starts in his first collegiate campaign.
Cal’s youth movement wasn’t limited to the freshman class. Mitchell assumed a starting role in the outfield and the sophomore held down the No. 2 spot in the lineup all season, starting all 54 games. At the plate, the Pleasant Hill, Calif. native did a little bit of everything for the Bears, finishing second on the club with a .325 batting average. He added 12 doubles, three home runs, one triple, a team-high 38 runs scored and 23 RBI while also stealing 11 bases to rank fourth in the Pac-12 in the category.
Dodson contributed maximum versatility to the Bears in his sophomore campaign as the Elk Grove, Calif. native was a major factor not only on the mound but also as Cal’s starting center fielder late in the season. He compiled a .297 batting average, led the team with 14 doubles and added three triples, three home runs, 29 runs scored and 26 RBI along with standout outfield defense. On the mound, Cal’s opening day starter made 19 appearances, converted to a bullpen role midway through the season and struck out 48 hitters in 52 innings pitched.
Oregon State was rewarded for an incredible season when it came to the other major awards as infielder Nick Madrigal was named both player of the year and defensive player of the year. Left-hander Luke Heimlich earned Pitcher of the Year honors and Beavers skipper Pat Casey was named coach of the year. Arizona’s JJ Matijevic was crowned batting champion with a .389 average.