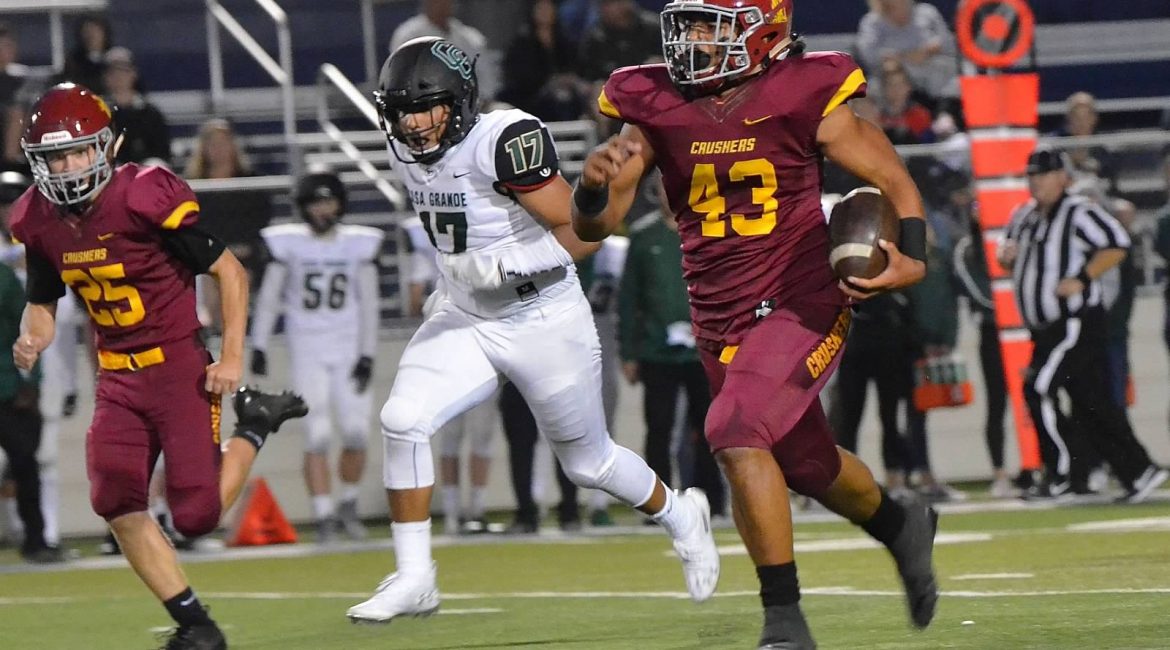 NAPA-It was a good homecoming night for Vintage High School on Friday night as the Crushers beat Casa Grande 44-0.

For Viliami Schaumkel all the way around the night was perfect. Besides being one of the Crushers (3-2, 1-0 Vine Valley Athletic League) leading rushers on the night he also won the distinct honor of homecoming king at halftime.

“I mean it doesn’t change anything,” Schaumkel said. “I try not to think about it because I just wanted to focus on the game and we’ve been preparing all week so I just wanted to put that aside till after the game.”

Schaumkel finished the night with 109 yards on eight carries.

Although not quite reflected in the score the Gauchos (1-5, 1-1 VVAL) only trailed by a score of 8-0, which was done in large part by Vintage fumbling the ball twice in the game’s first quarter.

All of Vintage’s scores came by way of the rush. The first score of the game came when Michael Webber scored on a six-yard rush with 9:34 left in the first quarter. Webber would later find the end zone again when he galloped into the end zone this time from 20 yard out with 10:52 left in the third quarter.

Mauricio Castro had two touchdowns on the evening as well. As time expired in the first half he busted a 75-yard score, and later with 4:33 left in the third quarter he scored on a 26 yarder.

Drew Hatfield also unleashed a long touchdown rush from 62 yards out, and Schaumkel scored one from seven yards away.

“We were physical upfront,” Vintage coach Dylan Leach said of the ability to run the ball on the night. “I thought we were able to sustain some blocks, and (that) allowed us to break through a couple little holes. The holes were real small, but once we got through them we were able to get to the second level.”

Due to the fact the game was running clock in the fourth quarter Vintage was able to get a lot of their backups some time playing in the game.

“Well I thought the score obviously helped us out there, but I thought even before the score I’m pretty big on packaging a lot of guys,” Leach said of getting the second and third stringers in. “I feel like guys work their butts off all year, they work hard in practice. I feel like they should get a shot, so it’s really hard when you’re in close games and you want to get to your workhorse, but at the same time we have a lot of guys that just play hard and I just feel they deserve it, so I wanna do what’s best for their psyckie obviously what’s best for the team.”

Both teams will continue league play next week. Vintage will travel Petaluma next Friday night at 7 p.m. Meanwhile, Casa Grande will have their bye week next week.

The Vintage junior varsity continued their dominance this season with another win on Friday night.

Reid McCaffrey had two touchdown catches to go along with an interception on the night to lead the Crushers (5-0).