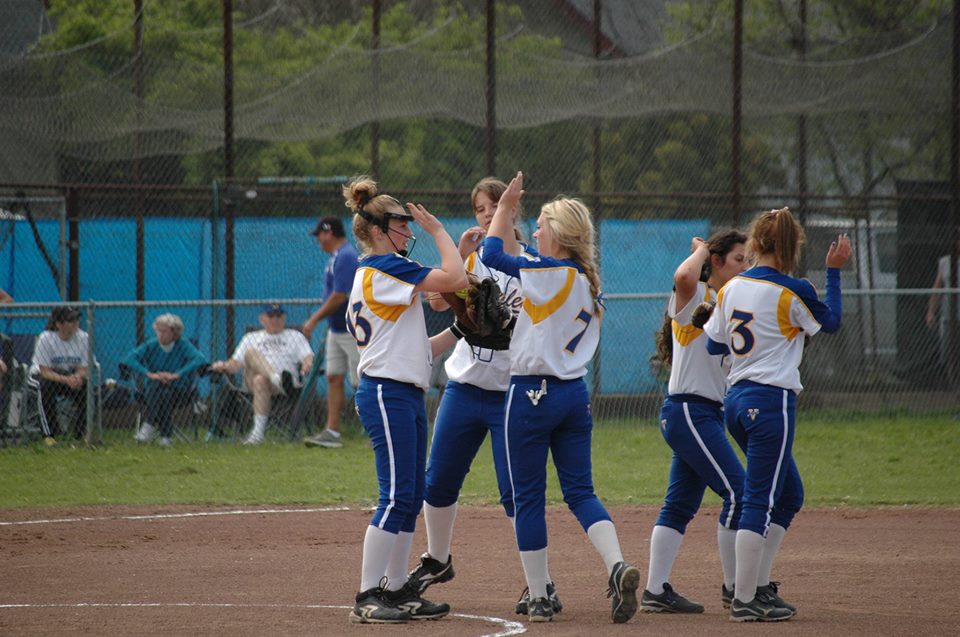 There was no time for moping around or chins down for the Cloverdale Eagle softball team.   Less than twenty four hours after they dropped their first NCL I game, the No. 4 Eagles faced what felt like a must win game at undefeated and no.6 Clear Lake.  The Eagles came through with a 4-1 win and move back into a virtual tie for first place, as they continue to try to defend the league title.

It isn’t surprising that with Cloverdale winning a huge softball game, Teanne Edens, their sophomore pitcher (who has pitched every inning for the Eagles this season), would have a big game.

You may say she went beyond the call of duty.  Not only did she pitch her typical game, but brought to the game a not so typical bat to lead the win.   Edens, who went into the game with a .311 average and one homer,  hit homers in back to back innings.    The first one came in the second, which started the scoring.   Cloverdale added another run in the second to make it 2-0 and then Edens launched another homer in the third, this one a two run shot to make it 4-0.

The rest of the game was about what Edens does best and that is pitching.   She started the game by striking out the side.   Clear Lake scored an unearned run in the second and had runners at first and second in both the fifth and sixth and didn’t score.    In the fifth, Edens gave up her only hit of the game, a chopper that deflected off of Edens glove.

Edens is now 12-4 on the season and has an ERA of 1.56.   If you take away the numbers of the Standley Tournament in the East Bay when Cloverdale lost three of its games against Division 1 schools, her ERA would be 0.49.

So the week started with it being a simple race between Cloverdale and Clear Lake and has turned wild.   Cloverdale has played one more game than Clear Lake, so they have a slight lead.   Unofficially, Middletown is sitting one game back with two losses.   On Friday, Middletown is at Cloverdale, so the race can change again.

Even though one of them lost, the four teams are set for the North Bay League post season tournament.  They will be Maria Carrillo, Montgomery, Cardinal Newman and Casa Grande.

No. 5 Casa Grande was the team that lost, dropping an eight inning 5-4 decision to Santa Rosa.   In a game that they committed five errors, the winning run scored on a wild pitch.

Each team scored three unearned runs in the game.   Santa Rosa’s came in the first when they took a 3-1 lead.  Santa Rosa’s first two batters reached on walks.   After two were out Casa Grande committed three straight errors for the three runs.

Casa Grande came back and carried a 4-3 lead into the bottom of the fourth when Santa Rosa tied it on a single by Richard Prentice.

Santa Rosa won it in the eight with Jordan Walker scoring the winning run.   He hit a one out double, went to third on an infield single by Prentice and after the second out, scored on the wild pitch.

Meanwhile make it sixteen straight for No. 1 Maria Carrillo, as they hold off Ukiah 9-7.    The big inning did it for Maria Carrillo again, as they scored seven in the fifth and wiped out a 4-2 Ukiah lead.

Austin Martinez was all over the seven run rally, starting it off with a single and scored the first run on a double by Keith Wallach.   Martinez then ended the rally with a two out, bases loaded double to give Maria Carrillo a 9-4 lead, from there they held on for the win.

Ukiah scored three runs in the bottom of the seventh and had runners at first and second with one out.   Clayton Andrews got out of the inning, getting the last out on a pick off.

The seven runs are the second most Maria Carrillo has given up this season.  The Pumas still hold a two game lead over No. 4 Montgomery with three to play.    Montgomery has a six game winning streak after an 8-2 win over Windsor.

In the other game Jeff Rebello pitched a two hitter as No. 6 Cardinal Newman beat Rancho Cotate 1-0.  Cardinal Newman scored the only run in the third on a sacrifice fly by Alex Roeser.    Cardinal Newman sneaks into third place in the NBL race, one game ahead of Casa Grande and one game behind second place Montgomery.

The No. 1 Petaluma Softball tournament can clinch a tie for the SCL championship, if they get a home win against No. 7 Sonoma Valley.   Sonoma Valley and No. 9 Analy are two back in the loss column.  Petaluma has three games to go and still has Analy on the schedule in the final league game of the season.

By the way, Joelle Krist hit another homer in Tuesday’s win over Piner.    It is her tenth of the season.   She also had a triple and is batting .538 on the season.