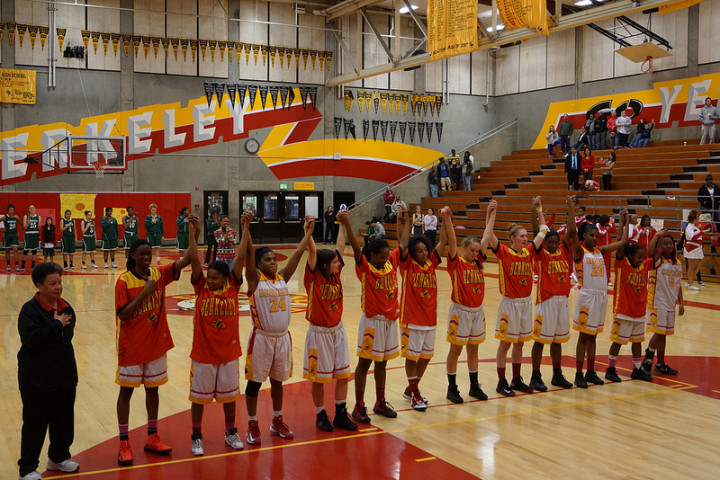 In the end shorthanded couldn’t handle the hot hand.

The Santa Rosa Girls Basketball team playing without two starters battled Berkeley into the fourth quarter before falling 56-45.   The loss drops the Panthers to 27-4 and although the dream of the school’s first ever North Coast Section Championship is gone, they still will participate in the Nor Cal Playoffs.

Santa Rosa was left wondering if a preview about that game saying they were “healthy again” was true, what could have been.

It was far from true.

The Panthers were without Katie Daly and Maddie Taylor.  Daly was out because of a concussion and Taylor because of a rotator cuff injury.   Taylor’s strong suit is defense and Daly, who along with Morgan Bertsch, was named NBL Co-Player of the Year ran the show for the Panthers offense.

The defensive effort wasn’t the factor.  In fact that kept Santa Rosa in the game.

Taking care of the ball was.

Santa Rosa had the height advantage.   When they tried to take advantage of that and get the ball inside what looked like a normal pass would be batted away by those quick hands.   After a while the normal pass turned into passes off target and went out of bounds or not handled and end up in Berkeley’s hands and they were off and running.

The few times they did get the ball inside there was a hand on a dribble.

Berkeley’s hands were everywhere.  If you didn’t know better, you would think they were coming out of stands they had so many hands in the way.

Santa Rosa had 17 first half turnovers.   Despite all of that they were still in the game.  That is because they also played some defense.  Despite being overmatched in the speed part of things, they made Berkeley earn everything they got.

The start of the game wasn’t a normal one.  As the teams were lining up for the jump ball, a Berkeley player decided to do a pull up, using the net as the bar.  She was hit with a technical and the game started with Santa Rosa shooting free throws, which they made one.

Most of the first half was defensive.  While Santa Rosa was turning it over, Berkeley would try to get the ball inside without much success.   The Panthers blocked four shots in the first half, two of them by Bertsch.  When they weren’t blocked, the shots weres changed or passes were thrown away.

With 2:30 to go in the half, Santa Rosa trailed 18-16.  The biggest spread up to that point was a 13-8.   Santa Rosa lead after Kyle Oden hit one of her four three pointers to open the second quarter scoring.  After taking the two point lead, Berkeley then went on an eight point run and had a 26-18 halftime lead.

At halftime word came down the No.1  seed Monte Vista was defeated, so the two teams were playing for a home area game for the NCS Championship, which really meant more to Santa Rosa not having to travel to the East Bay.

Oden got Santa Rosa off to a good start in the third by hitting a three and it started a 10-2 run which made it a 28-28 game with 4:50 left in the third.   The two teams traded hoops and when Devin Murray both took and hit her first three pointer of the season, the Panthers had a 33-31 lead with 2:30 left.

That turned out to be Santa Rosa’s last lead because next came the hot.  Desire Finnie, who is Berkeley’s leading scorer at 18 points a game, went off.  You could see signs that she was getting into a groove as the third quarter went on.  After scoring nine points in the first half, she had scored four in the third up to that moment.  Berkeley went on a 14 point run with Finnie scoring ten of them, including two three pointer from the corner.   From the time Murray hit the three pointer to give Santa Rosa the lead, Finnie scored the 14 of the next 16 Berkeley points.   She ended up with a game high 29 points.

That run basically ended a gutsy effort by Santa Rosa, who had a balanced scoring attack led by Bertsch with 13 points.  Oden with her four three scored 12 followed by Murray with 11 and Sara Howard with nine.

Daly is a senior and has been a four year starter for the Santa Rosa program.   That was 121 games ago and this is the first game since a three game stretch in late December in her freshman year.    Since the injury is a concussion there is no guarantee that she will be back for the Nor Cal first round game next week, although she was at the game and seemed to be in good spirits.

As for Taylor, who is also a senior and a third year varsity player, her return doesn’t look good.

Santa Rosa is 27-4 on the season and they will wait until Sunday to find out what the Nor Cal playoffs will take them.

The St. Vincent Girls and both the SRJC teams saved the night.

St. Vincent avenged a regular season defeat with a 33-30 win over San Domenico to advance to the NCS Division 5 championship game.   A recap of the game is in an article at this website.   St. Vincent goes for its first ever section championship when they meet No. 4 International on Saturday at Albany High School.  Game time is 5 pm.

Both the SRJC teams won and are headed in the same place for round two of the State Playoffs.   That place is Fresno City as that is who both teams play in No. 3 vs. No. 2 games on Saturday Night.

As you probably know by now the rest of the night didn’t go so well for the local teams.   Five other teams lost.  The Good News is the four of them have qualified for the Nor Cal tournament which will be announced on Sunday.

Because of the fairly new Open Division there is a chance that the Montgomery Boys and Santa Rosa Girls could host a first round game in the Nor Cal tournament.   The champions in those Divisions could end up in the open Division for the Nor Cal.   Remember last year Cardinal Newman lost the NCS Championship Division 4 game to Salesian.   Salesian went to the Open Division and Cardinal Newman was a No. 1 seed in the Nor Cal Division Division tournament and went all the way to the state championship game.  The Montgomery Boys and Santa Rosa Girls won’t be a No. 1 seed, but depending on the Section Championship games, they could get a home game.

The Analy and Ukiah Girls, who also lost on Wednesday, will not get a home game.