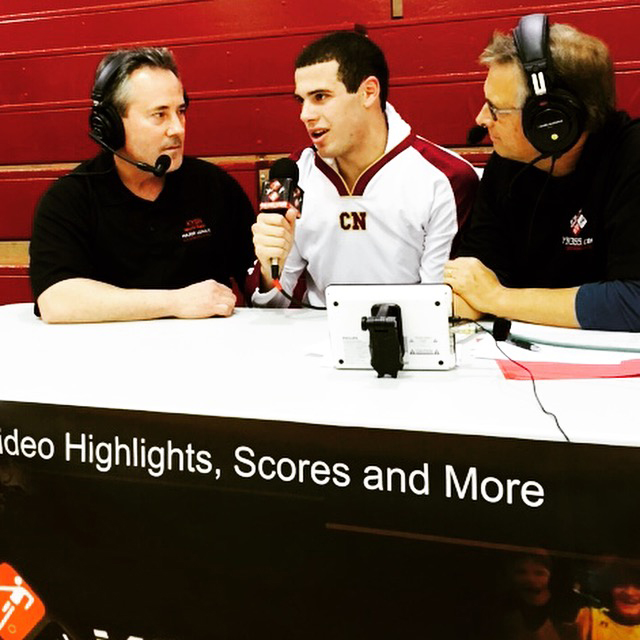 Considering how the first meeting between Cardinal Newman and Montgomery at the Viking Dome played out Wednesday Night, it was appropriate that the first points of the game were scored on a tough three point shot by Cardinal Newman Guard Connor Rubattino.  It was the start of a big night for Rubattino, who scored a game high 28 points as the Cardinals went on to take a 55-35 win, in a game between the top two teams in the YSN365.com rankings.
Rubattino was the glaring difference between the two teams.  He is a guard who wants the ball and hit the big shots as he has done all season.  Montgomery didn’t have that.  For people that have watch this rivalry develop over the past few seasons, they remember the Vikings hitting the big shot from the outside, that both changed the momentum and won games.  The chances appeared to be there, but the Vikings didn’t take the shot.  For the game Montgomery hit two three shots.  Rubattino had that many had in first quarter, when he scored 10 of the Cardinal’s 12 points.  He was also fouled on two three point shot attempts, one of them on a desperate shot with .3 left in the half, which he converted all three free throws and gave Cardinal Newman a 28-19 lead.
Montgomery might have had that player earlier in the season who could or would take that shot.  That was guard Michael Septimo who was in street clothes as he has been since injuring his knee two weeks ago.  Septimo will be out for the foreseeable future.
Whether Septimo would have been a difference maker or not is debatable.  Montgomery tried to use the advantage they did have and that was the height of 6’ 11” Erik Poulsen.  Almost every-time he got the ball inside, he was harassed by a relentless Cardinal Newman defense, which despite Rubbattino’s offense, is the best part of a team that is 12-0 on the season.  Poulsen was the Vikings leading scorer with 12 points and hit one of the two three’s for the Vikings on the night.


To Montgomery’s credit, in a game that felt one sided most of the night, they hung in  and gave hope for a good part of the night that there might be a miracle finish, but each time Montgomery would act like they could make it a game, Cardinal Newman would answer.
That answer was usually by Rubattino.  One example was the three pointer foul right before the half.  It came on a desperate shot and instead of a six point lead at the half, Cardinal Newman had a nine point lead.
Montgomery hung around and was within 37-28 with seven minutes left.  It was the first time since the halftime score that the lead was under ten.  The second time would be two minutes later at 39-31 and there was hope for the Viking portion of the packed Viking Dome, that the momentum was changing.  That was stopped on the next possession when Rubattino got the shooters role on a three pointer.  That started a 10-0 run in which Rubattino would hit another three and any chance for a suspenseful finish, that this series is known for.
Montgomery has lost six straight and is 5-8 on the season.

SCL BOYS
No. 3 Piner 63 El Molino 29
No. 4 Elsie Allen 57 Healdsburg 36
Analy 61 Sonoma Valley 51
NON LEAGUE
Petaluma at Vintage (No report)
FRIDAY SCHEDULE
No. 3 Piner (1-0) at No. 4 Elsie Allen (1-0)
Petaluma (0-0) at Analy (1-0)
Sonoma Valley (0-1) at El Molino (0-1)
Healdsburg (0-1) BYE—Off Friday. Host St. Helena on Saturday.
Piner held El Molino to 15 points in the first three quarters and had three score in double figures.
Jalen Busby scored 20 as Elsie Allen had a twenty point lead in the second quarter in its win over Healdsburg.
That sets up a early showdown Friday Night when Piner goes to Elsie Allen.
Analy had a 20 point lead in the first half in its win over Sonoma Valley.  Analy had three players score in double figures.