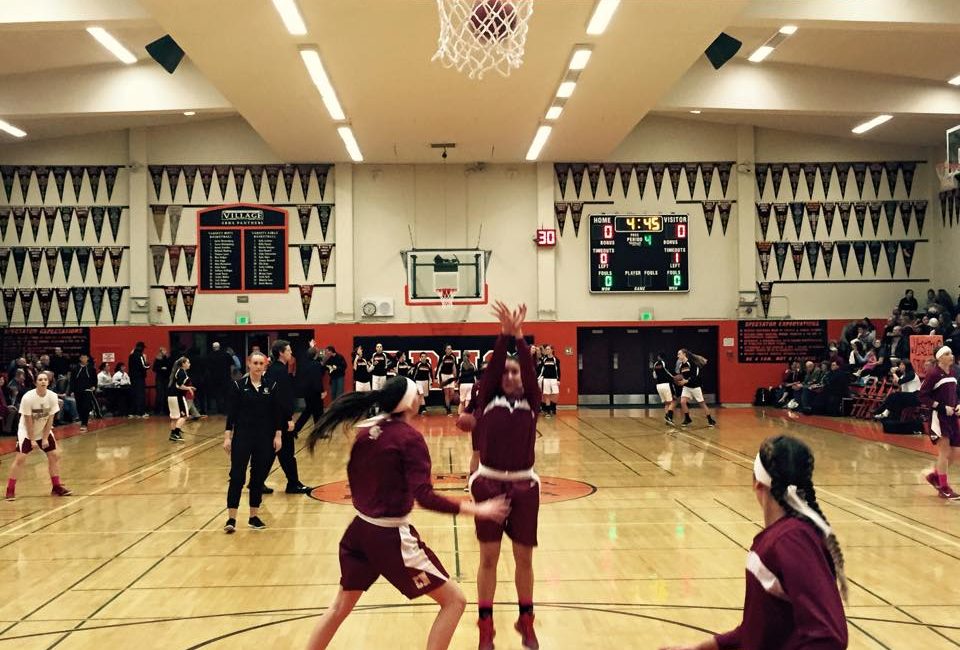 If the YSN365.com rankings are right and Cardinal Newman and Santa Rosa are the two top Girls teams in the area, there is a big difference between No. 1 and No. 2.  That is based on the Wednesday Night’s game, where Cardinal Newman cruised to a 66-33 win to take over first place in the NBL race.


The game was as dominating as the score indicates.  Cardinal Newman jumped out to an 8-2 lead in the first five minutes of the game and except for a couple minor push backs by Santa Rosa, controlled things from there.
Actually, in the first half, the score wasn’t as dominating as the action was on the court.  It was a game in which Santa Rosa’s defense kept things fairly close, but Cardinal Newman can play some defense too.  It took Santa Rosa over six minutes to score its first field goal. They actually scored two straight field goals and with a minute to go, the game was still close at 10-6.  On the next possession Maiya Flores buried one of her three first half 3 point shots.  Kylie Oden scored the next two Santa Rosa field goals, part of her team high 13 points.  It took over five minutes for those two field goals, the second one coming halfway through the second quarter and by then Cardinal Newman had a 26-11 lead.
During the 16-5 run, four different Cardinal Newman players scored which is the same amount who scored in double figures for the game, led by Tiffany Salinas, who had 14 points.  Cardinal Newman also dominated the boards outrebounding Santa Rosa 28-12 in the first half.  Hailey Vice-Neat pulled down nine of her game high 13 rebounds in the first half.  She also scored 11 points.

The portion of the near sellout crowd rooting for Santa Rosa didn’t have much to cheer about, but let it out every time Sophomore Emily Codding blocked one of  five shots.  They did have more things to cheer for in the third quarter.  After scoring 14 first half points, they almost equaled that in the third, with 12.  It seemed after every Santa Rosa basket, Cardinal Newman was scoring seconds later and once they took a 44-24 lead with 3:30 left in the quarter, the lead wouldn’t get under 20 again.
Cardinal Newman not only is the only undefeated team left in the NBL race, but has a seven game winning streak and is 13-5 on the season.
Santa Rosa drops to 12-6 and is still in sole possession of second place in the league race.  They again played the game without their leading scorer and rebounder Devin Murray.  That is something they may have to get used to as there is no telling when she will return, if she returns.  Murray is out with a concussion, her second of the season and third in the last three seasons.
BOYS
SONOMA COUNTY LEAGUE
No. 3 Elsie Allen 52 Petaluma 41
No. 7 Analy 42 El Molino 38
Sonoma Valley 60 Healdsburg 56 (2 OT)
No.4 Piner BYE
Elsie Allen led all the way in its win over Petaluma. Jalen Busby scored 24.
Analy outscored El Molino 13-2 in the second quarter to wipe out an early Lion lead.  Chance Ortega had 14 points and ten rebounds.  It was Ortega’s sixth double-double in seven games.
The game of the night was Sonoma Valley going double overtime to defeat Healdsburg.  Sonoma Valley rallied from a nine point halftime deficit.  Cyle Caselli with part of his 16 point night, hit a three at the buzzer of regulation to force overtime. Ryan Wilibanks led the Dragons with 19 points.  Healdsburg was led by Cody Newman who had a season high 22.  Landon Courtman had his twelfth double-double of the season, with 15 points and ten rebounds.
LEAGUE OVERVIEW: Analy, at least for the moment, is in sole possession of first place . The Tigers have the league BYE on Friday so Elsie Allen and Piner, who are tied for second, can join them at 4-1.  On Friday, Elsie Allen is at Sonoma Valley, who is in a solid fourth place one game out of first.  Piner hosts Healdsburg.
GIRLS
NORTH BAY LEAGUE
No. 1 Cardinal Newman 66 No. 2 Santa Rosa 33
No. 5 Windsor 44 Rancho Cotate 35
Montgomery 44 No. 7 Casa Grande 43
No. 10 Ukiah over Maria Carrillo (no score or details)
Jessica Barbosa scored 16 points as Windsor defeated Rancho Cotate.  Windsor outscored Rancho Cotate 18-9 in the third quarter to take control.
Montgomery rallied in the fourth to defeat Casa Grande.  Freshman Shayla Newman scored 16 points and pulled down 12 rebounds for the Vikings.  It is her fifth straight double-double.  Cassidy McKinney and Joy Jovick each had double-doubles for Casa Grande.
LEAGUE OVERVIEW: Cardinal Newman is all alone in first place at 6-0, one game ahead of Santa Rosa.  Windsor and Montgomery are two games back at 4-2.  Montgomery has won three of four and is 9-9 on the season.  On Friday night the Vikings host Santa Rosa.
THURSDAY SCHEDULE
BOYS
NORTH BAY LEAGUE
No. 1 Cardinal Newman at Santa Rosa
No. 2 Montgomery at No. 5 Casa Grande
ysn365.com LIVE BROADCAST
Rancho Cotate at No. 6 Windsor
Maria Carrillo at Ukiah
Casa Grande tries to remain the only undefeated team in the NBL race.  Montgomery and Cardinal Newman at 4-1 are one game behind.
GIRLS
SONOMA COUNTY LEAGUE
No. 1 Sonoma Valley at Elsie Allen
No. 6 Petaluma at El Molino
Piner at Healdsburg
No. 4 Analy BYE
Sonoma Valley is the only undefeated team in the SCL race and has a one game lead over Analy.  Piner and Healdsburg are tied for the final SCL post season tournament spot.
My email address is jacpasquini@comcast.net
Now also you can follow me at twitter @homer2612
Share