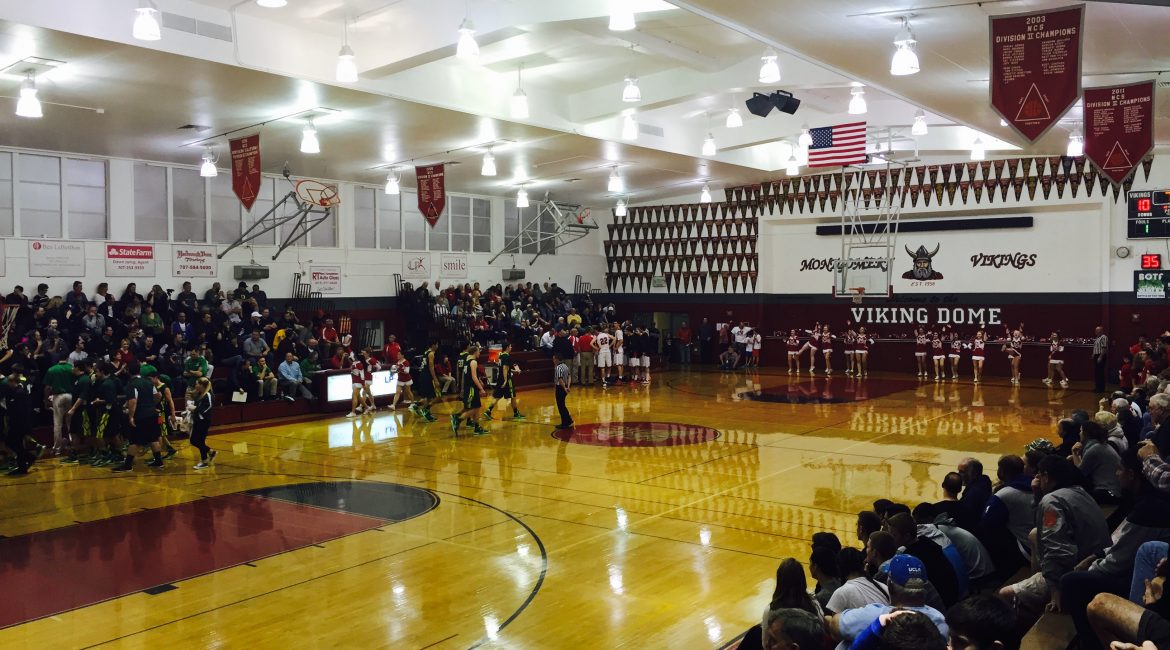 NORTH BAY LEAGUE
WEDNESDAY
POST SEASON TOURNAMENT (ROUND ONE)
No. 1 Cardinal Newman 63 No. 7 Windsor 62 (OT)
No. 2 Montgomery 49 No. 4 Casa Grande 36
FRIDAY
CHAMPIONSHIP GAME AT SRJC…8:15
No. 1 Cardinal Newman (25-2) vs. No. 2 Montgomery (18-9)
Both games were rubber matches from league play and it sets up another one.
Cardinal Newman rallied late in both the fourth quarter and overtime to steal one from Windsor.  The Cardinals scored eight straight to erase a four point Windsor lead in the last two minutes of OT.
James Ryan and Connor Rubattino each scored 15 to lead Cardinal Newman.  Ryan hit a shot with :02 left in regulation to get the game into overtime.
Windsor, who drops to 15-11 on the season, will now wait until Sunday to see what is next in the North Coast Section playoffs.  They will probably have to go on the road.


Montgomery didn’t have the suspense Cardinal Newman did in its win over Casa Grande.  Jack Fitchie was one of three Vikings in double figures with 14 points.
Casa Grande drops its third straight and is 17-10 on the season.  The Gauchos will be keeping their fingers crossed for a home game in the first round of the NCS Division 2 playoffs.
So the debate for No. 1 in the YSN365.com rankings will be decided on Friday Night with another Cardinal Newman-Montgomery game.
Oh, also what will be decided is the NCS automatic berth as NBL Champions.
SONOMA COUNTY LEAGUE
WEDNESDAY
No. 3 Elsie Allen 60 Sonoma Valley 37
No. 5 Piner 60 No. 8 Analy 52
FRIDAY
CHAMPIONSHIP GAME AT 7 PM
No. 5 Piner (19-6) at No. 3 Elsie Allen (22-5)
Above it states that the debate for No. 1 in YSN365.com rankings will be decided by the Cardinal Newman-Montgomery game.
Elsie Allen might not agree.
For the second time in less than a week Elsie Allen jumped out early and defeated Sonoma Valley to advance to the Sonoma County League post season tournament championship game.
Elsie Allen had a twenty point lead halfway through the second quarter and cruised home from there.  The win is the first in school history in a League Post Season Tournament and raises its record to 22-5 and its winning streak to twelve straight.
The last loss was a home game to Piner, which is the situation in Friday’s SCL post season tournament championship game.
Piner advances to the championship game with a 60-52 win over Analy.  Keith Adams scored a game high 23 points. Piner scored the first 13 points of the game and withstood an Analy rally that had the lead down five several times.
Analy drops to 12-15 on the season and is barely hanging on as a bubble team for the NCS Division 2 playoffs.
Piner is 19-6 on the season.
GIRLS
NBL CHAMPIONSHIP GAME AT SRJC…6:30
No. 2 Santa Rosa (20-7) at No. 1 Cardinal Newman (22-5)
My email address is jacpasquini@comcast.net
You can also now follow me at twitter @homer2612
Share