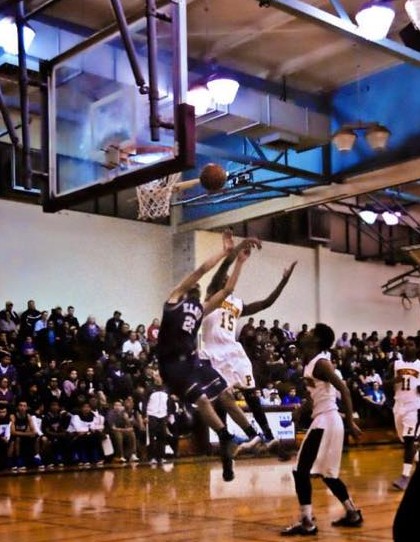 It is a statement you haven’t heard very often.


Elsie Allen—League Champions.
Elsie Allen sewed up the SCL Boys Basketball race with a 66-43 win over Petaluma.  The win also raises the Lobo’s record to 20-5, the first time in school history that they have hit the twenty win mark.
For the first game of the season, the Elsie Allen fans got to see what they envisioned at the beginning of the season, Joe Hoeup and Jalen Busby at full strength as both hit the 20 point mark.  Joe Hoeup hits six 3’s and scored 24 points, both season highs.  Busby scored, what is average for him, 21 points.  He also pulled down fifteen rebounds.
Petaluma cut an 11 point halftime lead to five with 3:40 left in the third quarter.  By the end of the quarter the lead was back up to 11 and Elsie Allen pulled away from there.
There is one more order of business for Elsie Allen and that is not to have to share the SCL championship.  They can take care of that with a home win against Sonoma Valley on Friday.  Elsie Allen goes into that game with a one game lead over Piner.
Elsie Allen wins the tie-breaker with Piner because of the numbers drawn at the beginning of the season, so no matter what happens on Friday they will be the No. 1 seed in the post season tournament and the SCL champions in the NCS playoffs.
The Lobos would just like to make things official and the championship their own.
NORTH BAY LEAGUE
WEDNESDAY RESULTS
No. 2 Montgomery 50 No. 1 Casa Grande 43
No. 3 Cardinal Newman 79 Santa Rosa 55
No. 7 Windsor 55 Rancho Cotate 17
Maria Carrillo 56 Ukiah 46
FRIDAY
No. 3 Cardinal Newman at No. 1 Casa Grande
No. 2 Montgomery at Santa Rosa
Maria Carrillo at No. 7 Windsor
Ukiah at Rancho Cotate

Going into the final night of the NBL league season there is a three way tie for first place between Cardinal Newman, Casa Grande and Montgomery.
The only way the race for the league championship ends on Friday is if Santa Rosa upsets Montgomery.  If that happens the Cardinal Newman-Casa Grande winner will be the league champion.
If Montgomery defeats Santa Rosa they will tie the Cardinal Newman-Casa Grande winner for the league championship and both schools would get pennants.  Then the league champion for the NCS playoffs will be decided by who does best in the Post Season Tournament.
As far as the seedings go, it looks like this:
If Cardinal Newman and Montgomery win, Cardinal Newman will be the No. 1 seed and will host Windsor in the first round.  Casa Grande would be at Montgomery.  That wouldn’t change if Santa Rosa defeats Montgomery.  What would change is Cardinal Newman would be NBL champions.
If Montgomery and Casa Grande win, Montgomery would be the No. 1 seed and will host Windsor.  That would also set up another game in Petaluma between Cardinal Newman and Casa Grande.
The first round is next Wednesday with the championship game next Friday at SRJC.
The plan is to have a complete article on Montgomery’s win over Casa Grande later in the day.
SONOMA COUNTY LEAGUE
WEDNESDAY
No. 4 Elsie Allen 66 Petaluma 43
Healdsburg 53 No. 8 Sonoma Valley 47
No. 9 Analy 73 El Molino 42
No. 5 Piner BYE
FRIDAY
No. 8 Sonoma Valley at No. 4 Elsie Allen
No. 5 Piner at Healdsburg
Petaluma at El Molino
No. 9 Analy BYE
Healdsburg’s win over Sonoma Valley means the first round of the SCL post season tournament is set.
No. 4 Sonoma Valley at No. 1 Elsie Allen
No. 3 Analy at No. 2 Piner
Those games will be on Wednesday. The championship game is on Friday Night at the school with the highest seed.
THURSDAY SCHEDULE
GIRLS
NORTH BAY LEAGUE
No. 1 Cardinal Newman at Casa Grande
No. 8 Montgomery at No. 2 Santa Rosa
Maria Carrillo at No. 7 Windsor
Rancho Cotate at Ukiah
The suspense in this league is two things.
One is whether or not Cardinal Newman will finish league play undefeated.  If they do, they will be the first team to do it since Maria Carrillo did it in 2008.
The other is what the matchups in the first round of the NBL Post Season Tournament will be.  For sure, Cardinal Newman and Santa Rosa will be the two home teams.  Also they will play either Windsor or Montgomery.
Windsor and Montgomery are tied for third place.  Windsor would get the tie-breaker because they won both games against Montgomery.  The third place team will be at Santa Rosa.  The fourth place team at Cardinal Newman.
SONOMA COUNTY LEAGUE
Elsie Allen at No. 3 Sonoma Valley
El Molino at No. 4 Petaluma
Healdsburg at Piner
No. 5 Analy BYE
The expected win for Sonoma Valley will give them their first solo league championship since 1980.  The Dragons tied for first in 2008 with Petaluma.  That was also the last time they won twenty games until this season.  They are going for win number twenty one, which is the same amount they won in 2008.
It has been a rocky road back.  Two seasons they finished under .500 twice, including going 7-19 in 2010.
Sonoma Valley does need the win to be the league champions for the NCS.  If this upset happens, it would be an all-time upset, and if Petaluma wins, the tie-breaker goes to Petaluma.
The worst Petaluma will be is a No. 2 seed in the post season tournament, which means they would host Analy in the first round next Tuesday.
Who Sonoma Valley would host, if they beat Elsie Allen, is to be determined.  The Healdsburg-Piner game is the same as a playoff game. The winner advances to the Post Season Tournament.
NCL I
No. 6 Middletown at Clear Lake
Fort Bragg at Cloverdale
A Middletown win and they clinch a tie for the league title.
Second place Kelseyville is at Lower Lake on Friday.
Middletown has the tie-breaker because of numbers drawn.
BOYS
NCL I
No. 6 Cloverdale at Fort Bragg
Middletown at Clear Lake
A win by Cloverdale and they clinch a tie for the league title.
Second place Willits hosts St. Helena on Friday.
Cloverdale has the tie-breaker because they went 2-0 against Willits.
My email address is jacpasquini@comcast.net
You can also now follow me at twitter @homer2612
Share