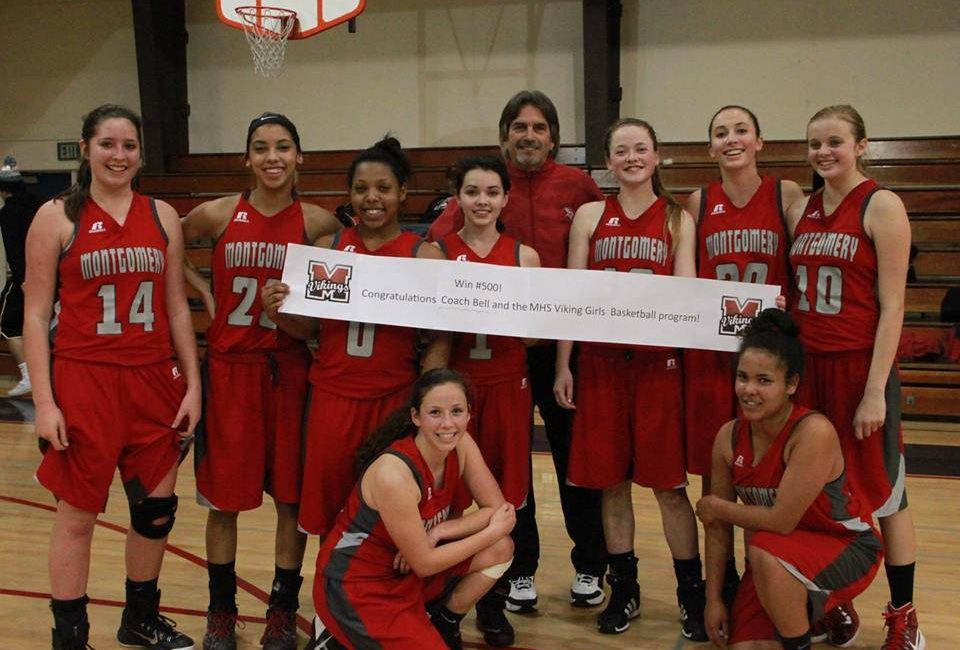 In a night things went pretty much as expected in the local games (at least in the games that were reported), there was quite a milestone in the local High School Basketball world.
The Montgomery Girls basketball team defeated Rancho Cotate 57-35.  This is not a game that stands out more than any other game and yet it stands out more.  The win was the 500th win for Coach Steve Bell coaching career at Montgomery High School.


I shouldn’t even be commenting on this because Steve Bell doesn’t wants a big fuss over it.  So I will make it as quick as I can.
Montgomery has a pretty good program.  I am not talking about basketball program, although that speaks for itself for both the Boys and Girls.  I am talking about the program that is a magazine that you can get at each game.  Part of it is the list of the yearly record of its basketball coaches.  I am a bit of a number freak and as soon as I got it last year, I started doing the math and figured out that this day was coming and most likely this year.  As he got closer I told him the numbers I had and how close he is getting and Bell was more worried about the development of the team.  I also asked him if he even wanted it acknowledged and he said he has been told about it and it was on Facebook last night (besides the YSN365.com Facebook page).  He also requested that nothing be made of it, at least until the number was hit.
The number was hit.
That is Coach Steve Bell in a nutshell.  It isn’t about him, but the kids that he is coaching.  He will tell you that the reason he has reached the number is because of the talented kids that he has had over the years.  That is true and if I mentioned some names from the past that helped get him to this point, he might not be happy, because I might leave a name out or several names out.  He won’t be happy anyway for writing anything about it, so I don’t want to push my luck.
Bell simply states, “It is about great kids who continue to work hard.  I look at it more as a positive reflection of Montgomery and our basketball program, as well as all the coaches and players who have contributed their collective time and efforts.”
That quote came when the he was still five games away from the milestone.  After he got it last night, he continues to pass around the credit to all concerned including Assistant Coach Darryl LaBlue, who is also the JV head coach and the rest of the coaching staff saying, “Our coaching staff has been big in developing a very competitive program over the years, teaching the skills, abilities and knowledge players will need to achieve the best results. School support has been exceptional as well. Darryl and I started with the concept of working “Together”, both on/off the court, which I feel provides players the opportunity to adjust to various situations and make good decisions.  They deserve a large amount of the credit.”
Bell added, “I have been blessed with gifted, athletic young ladies who play hard and focus on TEAM”.
Bell focused on word TEAM, which to him along with the kids is what it was all about.  The first TEAM that he had was in 1990.  That TEAM went 15-10 and he was off and running.  Since then there are seven NBL regular season championships, nine NBL Post Season tournament championships and fifteen seasons of at least twenty wins, including eleven straight from 2003-13.
Those are the numbers on the court.  Please don’t tell him this is here.
WEDNESDAY RESULTS
BOYS
SONOMA COUNTY LEAGUE
No. 4 Elsie Allen 58 El Molino 36
No. 6 Piner 66, Petaluma 62
WATCH THE FULL GAME HERE
No. 8 Analy 72 Healdsburg 37
No. 10 Sonoma Valley BYE
There was what you could call another milestone when on Wednesday Night.  The milestone is expected to get bigger.
The milestone win was Elsie Allen defeating El Molino 58-36.  That raises the Lobos record to 18-5, which ties the school record for the most wins in a school season.  It is the third time that the program has reached the 18 win mark, the second was last season.


Jalen Busby, on the day he was named Northern California player of the week by Cal Hi-Sports, scored 16 and Joe Hoeup added 14 to put him over the 1,000 point mark in his Elsie Allen career.
Breaking the school record is all but guaranteed. The first shot will be Friday Night when Analy visits Elsie Allen high school.
LEAGUE OVERVIEW: Elsie Allen is in first place at 8-1 which is a half-game ahead of Piner who is 8-2. Analy is 7-3 which is a half-game ahead of fourth place Sonoma Valley who is 6-3. Those will be the four teams in the SCL post season tournament.