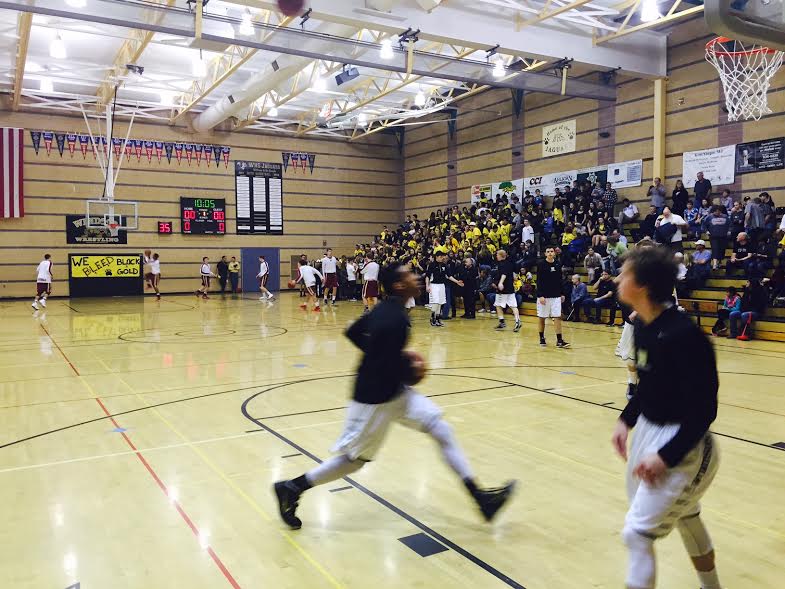 On Friday Night Windsor travels to Casa Grande and the winner will be in sole possession of first place in the North Bay League race.
Just like everyone figured.
The turn of events of this 2015 high school basketball season was set up on Wednesday night when Windsor handed Cardinal Newman its first loss of the season 43-36.
If you could saw this coming congratulate yourself and go out and play the lottery.  Yes, each team went into the game 2-0, but it was a different 2-0.
Cardinal Newman, who went into the game 13-0 and the YSN365.com No. 1 team had won its first two league games by a combined 57 points, including a 20 point win at No. 2 Montgomery.

Meanwhile, Windsor won its league games by a combined ten points.  Before that they had lost three of four, the three losses to teams in its own tournament.  None of the three teams they lost to are over .500.  Add to it in the semi-final game of the Brett Callan Memorial tournament at Casa Grande (on its way to winning -the tournament championship), Cardinal Newman defeated Windsor in the semi-final 57-46.
That game was closer than the score might indicate.  This game didn’t start off looking loke it would be close at all.  Connor Rubattino scored six of his game high 19 points as Cardinal Newman scored the first ten points of the game.  Things seemed like it was going along with the expected script.
That is when Windsor changed things.  A 10-2 run cut the lead to 12-10 early in the second quarter.  After that it was a tight game right down to the last second.  Windsor took its first lead when Gabe Knight scored nearly half of his 14 points by hitting back to back 3’s to make it 24-21, midway through the third quarter.
From then, three points was the biggest spread until the final minute.  Brent Tucker, who was Windsor’s leading scorer with 17 points, hit the last of his four 3’s with 1:30 left to give Windsor the lead for good 37-36.  Cardinal Newman went the last two minutes without a score and Windsor hit six straight free throws, four of them by Tucker, in the last minute and not only was the upset accomplished, the NBL race has been thrown on its side.
WATCH THE VIDEO HIGHLIGHTS HERE
So now, on we go to the game that will decide which will be the last undefeated team in NBL race, when Windsor travels to Casa Grande.  Back in the December in the Callen Memorial Tournament.  Windsor followed up the loss to Cardinal Newman with a 51-43 win over Casa Grande, in the third place game.
As you can tell on Wednesday, the December scores have nothing to do with what happens in January.
BOYS
NORTH BAY LEAGUE
No. 7 Windsor 43 No. 1 Cardinal Newman 36
No. 2 Montgomery 66 Maria Carrillo 36
No. 6 Casa Grande 84 Rancho Cotate 38
No. 9 Ukiah 60 Santa Rosa 45
FRIDAY
No. 9 Ukiah at No. 1 Cardinal Newman
Rancho Cotate at No. 2 Montgomery
No. 7 Windsor at No. 6 Casa Grande
Maria Carrillo at Santa Rosa
The scoreboard and schedule is put in the order of highest ranked teams in the YSN365.com rankings.  If you go by the importance of the league standings, the Casa Grande-Rancho Cotate game would be listed in the results standings and the Windsor-Casa Grande game would be listed first in Friday’s schedule.
Jon Cristy scored 20 points as Casa Grande led from the beginning against Rancho Cotate.  Casa Grande has won five straight.
A big third quarter blew things open for Montgomery in its win over Maria Carrillo.  Erik Poulsen scored 21 to lead the Vikings.
Ukiah won its first league game with a win over Santa Rosa.  The second quarter was the difference in that game as Ukiah took a 15 point halftime lead.  Karter Koch and Nate Hale combined for 25 points.
LEAGUE OVERVIEW: So here we are. Casa Grande and Windsor are tied for first at 3-0 and Cardinal Newman and Montgomery are one game back at 2-1.  Montgomery has yet to play either Casa Grande or Windsor.  That happens next week.
SONOMA COUNTY LEAGUE
No. 3 Piner 63 Petaluma 43
No. 4 Elsie Allen 64 El Molino 49
No. 8 Analy 49 Healdsburg 26
Sonoma Valley (2-1) BYE
FRIDAY
No. 3 Piner at Sonoma Valley
No. 4 Elsie Allen at No. 8 Analy
Healdsburg at Petaluma
El Molino BYE
The SCL also has a huge game on Friday Night with Elsie Allen traveling to Analy.
Analy is the only undefeated team left in league play after the win over Healdsburg.  Chance Ortega and Jack Newman each scored 15 for the Tigers, who have won four straight and six of seven.  At 8-7 overall, they are over .500 for the first time this season.
Elsie Allen had a big third quarter to break away from a halftime tie in its win over Elsie Allen.  Jalen Busby scored 25 for Elsie Allen.  It is the fifth time in six games that Busby has hit the 20 point mark.  Lonnie Jasper helped keep El Molino close with a game high 23 points which included four 3’s.
Keith Adams scored 18 as Piner defeated Petaluma.  Piner jumped out to a 13 point third quarter lead and didn’t look back.
THURSDAY NIGHT
GIRLS
NORTH BAY LEAGUE
No. 10 Ukiah at No. 1 Cardinal Newman
Maria Carrillo at No. 2 Santa Rosa
No. 5 Windsor at No. 6 Casa Grande
Rancho Cotate at Montgomery
LEAGUE OVERVIEW: Cardinal Newman and Santa Rosa are 3-0 and are one game away from playing each other.  Casa Grande is sitting one game back, with the loss to Santa Rosa.  Every other team has at least two losses.
SONOMA COUNTY LEAGUE
El Molino at No. 3 Sonoma Valley
No. 8 Analy at No. 4 Petaluma
Elsie Allen at Piner
Healdsburg BYE
LEAGUE OVERVIEW: Sonoma Valley is the only team undefeated in league play.  Three teams are sitting behind Sonoma Valley with one loss.  That is Petaluma, Healdsburg and Analy.
My email address is jacpasquini@comcast.net