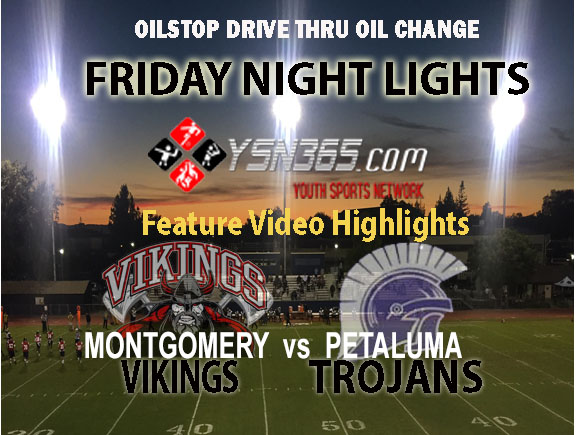 High school football season kicks off this Friday, let’s take a look at some of the matchups.
Montgomery vs Petaluma @ Casa Grande, 7:30 Video Highlights will be available on YSN 365.com
Montgomery head coach Tony Keefer will make his coaching debut for the Vikings. They’ll travel to Petaluma to take on the Trojans at Casa Grande High School Friday night. Also, Trent Herzog will have a little homecoming coaching on the visiting sidelines for the first time as the defensive coordinator. He also has North Bay quarterback training guru Keith Simons as offensive coordinator, and longtime North Bay coach Chris Augusto as his top assistant. Joey Thresh looks like he’ll be getting first team snaps. BJ Johnson should see a lot of pass attempts for Montgomery’s passing attack. Petaluma will once again rely on the running game offensively, using their speed for outside runs, and muscle for runs right up the middle.


Justin Wolbert is back at QB for the Trojans and Jacob Rollstin is back at fullback to lead the Trojan backfield.

Saint Mary’s (Albany) @ Rancho Cotate, 7:30
Saint Mary’s gets another shot at the team they lost to in round one of the NCS Playoffs last season, however, it could’ve very well been an upset for the Panthers, but Rancho held on for a 35-28 win. Gehrig Hotaling makes his head coaching debut as he replaces Ed Conroy at the helm for the Cougars. The new coach won’t stop from Jake Simmons from getting his opportunity to be a playmaker on offense. Logan Reese, and Jaelan Ward will be key options for Simmons in the air.
OTHER GAMES:
Friday:
Santa Rosa (CA) at Berkeley (CA), 7:30pm
Fortuna (CA) at Cardinal Newman (Santa Rosa, CA), 7:30pm
Maria Carrillo (Santa Rosa, CA) vs. Analy (Sebastopol, CA) at Santa Rosa Junior College (Santa Rosa, CA), 7:30pm